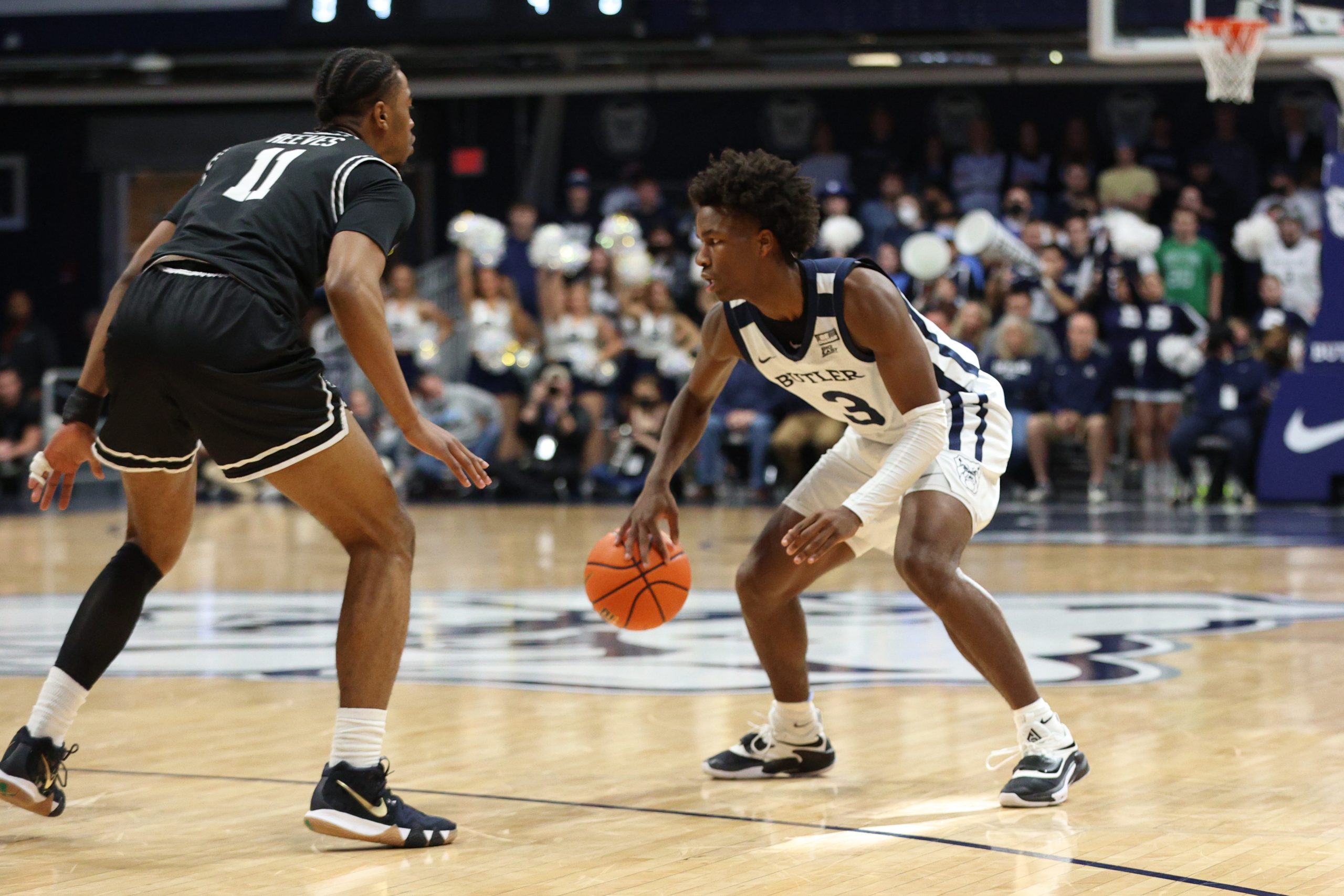 Sophomore guard Chuck Harris dribbles at the top of arc during a matchup against the Providence Friars on Feb. 20 at Hinkle Fieldhouse. The men’s basketball team has loss four games by one possession in the month of February alone. Photo by Claire Runkel.

The women’s swimming team travels to Long Island, New York to participate in the Big East Championships. The first event is the diving prelims which begins at 3:45 p.m., followed by four relay finals — the men’s and women’s 800 yard freestyle and the men’s and women’s 200 yard medley relay. The tournament will continue throughout the week and end on Saturday, Feb. 26.

Live results will be available for each session on the Big East website.

The Bulldogs head out to the East Coast to play the Seton Hall Pirates. This is the second time these teams have played since Jan. 4 where the Pirates defeated the Bulldogs in Hinkle Fieldhouse 71-56. Tip-off for this game is at 8:30 p.m. and can be viewed on FS1 and listened to on WXNT 1430AM.

The Butler women’s golf team will head down to Rio Verde, Arizona to partake in the Rio Verde invitational hosted by Western Michigan University. 17 other teams will also be participating in this tournament including fellow Big East school, Xavier. Tee off is at 8:30 a.m. and the tournament will continue through Sunday.

Both the men’s and women’s track teams will compete for the opportunity to move onto the indoor National Championships at the Big East indoor championships in Chicago, Illinois. The championships are hosted by DePaul University and will kick off at 8:30 a.m.

The women’s tennis team will host a match against Eastern Michigan on Friday. The match will begin at 11 a.m. The Bulldogs look to bounce back after being defeated by Western Michigan last Saturday on the road.

After starting the season 7-4, the Bulldogs will head down to the University of Tennessee-Chattanooga to play a slate of five games over three days. Butler will have two double headers before closing out the road trip on Sunday against Northern Illinois. First pitch for the first set of double headers is scheduled for 12:30 p.m. against NIU, and 3 p.m. against EKU.

Butler baseball opened its season last weekend against Murray State and will return to action Friday and will play three games in two days. The Dawgs will play Jackson State on Friday with first pitch at 2 p.m.

In their second to last game of the season, the women’s team hosts Villanova at Hinkle Fieldhouse. Nova has the second leading scorer in the country with junior forward Maddy Siegrest who is averaging 26.3 points per game. Butler’s Graduate student Celena Taborn leads the country in shooting percentage with a 68.5% clip. Tipoff is at 7 p.m. and the game is watchable on BEDN on Flosports.

On Saturday the men’s basketball team will head north to play Marquette. These two teams played earlier this month with Butler amassing a 21-point margin and never surrendering the lead, resulting in a 85-79 victory for the Dawgs, Butler will try to sweep Marquette for the first time since 2015. Tip-off is at 1 p.m. and available to watch and listen on FOX and WXNT 1430AM.

For their second day of double headers, the Dawg’s will take on host team Chattanooga at 12:30 p.m., followed by SIU at 3 p.m.

The women’s tennis team faces off against in-state rival, Purdue. This match will see it’s first serve at 10 am in West Lafayette.

After defeating Kent State 11-10 on Feb. 12, the women’s lacrosse team returns to action on the road against Central Michigan. Central Michigan has opened the season 0-2 with losses to Notre Dame and Louisville. This matchup begins at noon.

The Bulldogs will close out their regular season at home this Sunday against Georgetown. The last time these two Big East rivals faced each other was in late January, with the Hoyas picking up the 78-62 victory. Opening tip is at 2 p.m and the game can be watched on BEDN on Flosports.

Women’s lacrosse will hit the road again to face-off against the Louisville Cardinals. This will come following their match against Central Michigan in Mount Pleasant. The action will begin at 3 p.m.