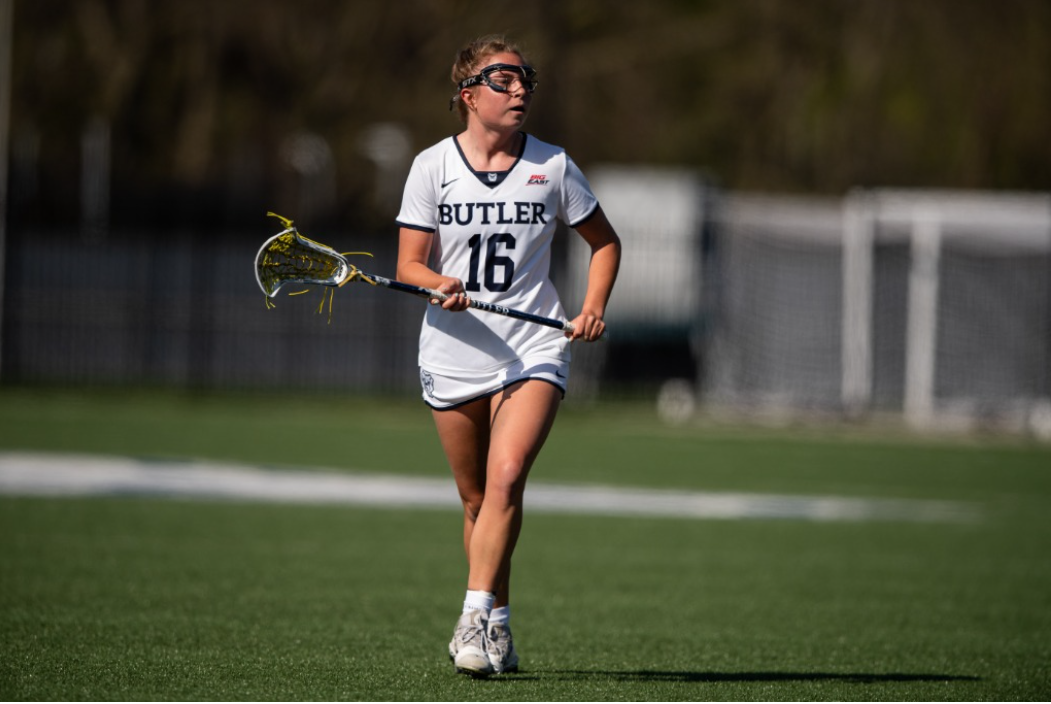 Junior Kaley Attaway in an Apr. 16, 2021 matchup against Denison. Attaway had five goals in the seven games the team played in the shortened 2019-20 season. Photo courtesy of Butler Athletics.

The women’s lacrosse team started off their season on a high note on Feb. 12, winning on the road against Kent State by a score of 11-10 for their first win of the year.

The Dawgs fell behind 2-0 early in the first quarter due to a pair of goals from Kent State’s Kenzie Sklar, but quickly responded and tied the game at 2-2 after goals from Kayla Kielbasa and Campbell Connors, respectively.

The Dawgs carried their momentum into the second quarter, which they won 4-2. Kaley Attaway scored twice in the period, while Leah Rubino and Campbell Connors both added a goal of their own.

The Golden Flashes would respond, however, and Kenzie Sklar’s fifth goal of the game tied it up at 6-6.

Gabryelle Bodine had an answer for the Dawgs, followed by another score from Kayla Kielbasa. Attaway added her third of the day on a free position shot with just under two minutes left in the third quarter.

Holly Hall scored to give the Bulldogs a 10-7 lead three minutes into the fourth quarter before two Kent State goals from Abby Jones and Kenzie Sklar, respectively, cut the lead back down to one.

Kaley Attaway sealed the deal for the Bulldogs, scoring her fourth goal of the game to give Butler a two-goal lead with just over a minute left, and they never looked back.

After the game, head coach Cecil Pilson congratulated his team on their persistent effort to get the win.

“The team worked hard and fought through a tough game,” Pilson said. “Really happy for Kaley today, she had a great performance in the midfield for us. Monroe was also great today and picked up her first collegiate win. A lot of good came from today and we are happy with the result.”

The Bulldogs’ next game is on Saturday, February 19 at 3 p.m. when they travel to Ohio to face Denison.