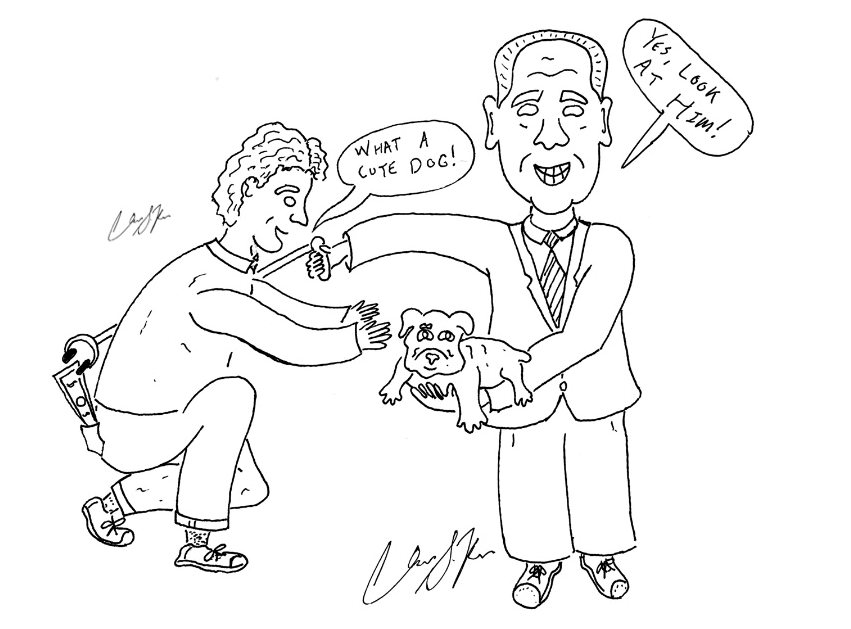 Last semester I wrote a story about Butler Blue III.

That story got a lot of views, but some people were not very happy with it. While other Bulldogs have felt a connection with Trip, toting a genuine love for the celebrity felt artificial to me.

In the last few months as the reveal of Butler Blue IV was approaching, my apathy grew. I knew the university would try to create as much hype as possible, and I did not want to fall for another cute dog I would hardly ever see.

After the official Butler Blue accounts posted photos of the new pup on social media, the excitement on campus began to build, culminating in his appearance to the student body on Friday, January 24. I saw Snapchat story after Snapchat story with students holding the sweet little squishball with huge grins on their faces.

In the last week and a half, I have witnessed more excitement and school spirit than I have in the last year and a half as a student.

For senior pharmacy major Natalie Rohweder, going to a school that was passionate about athletics was a big part of her decision to go to Butler University. When she toured as a swimming recruit, she could tell school spirit was high because of the live mascot program.

“I think having a live mascot adds to that and encourages students to be excited and proud of their school and to be able to say that we have a live mascot, and that he happens to be really adorable,” Rohweder said.

While students were excited about Blue, some aspects of the reveal fell flat. Some students questioned the lack of gender representation in the Butler Blue dynasty. Others were disappointed in the name.

This fact was made evident in a tweet posted by Michael Kaltenmark, live mascot program handler and director of external relations, last week. Framed as his “Ted Talk,” Kaltenmark explained his view on the issues of gender and name for Blue IV, as well as the general role of Butler Blue for the university.

The point was that:

I am not sure whose specific “perspectives” drove Kaltenmark to post that tweet. But honestly, choosing another boy named Blue did not exactly appeal to me either.

Are we not supposed to be critical? We go to a liberal arts school that teaches us to filter the narratives we are fed — especially messages by for-profit organizations and messages disseminated through social media.

One of the university’s strong points is hiring professors that stress critical thinking, so they should not be surprised we question the university’s decisions. Plus, any naming suggestions were clearly good-natured and demonstrate students’ involvement with the live mascot program and participation in university decisions as a whole. To then receive backlash for simple, creative suggestions is hurtful and patronizing.

Productive communities exchange opinions. The process of give and take, presentation and refutation, help reach a place where all stakeholders can all feel represented and decisions feel transparent.

Without clarity in the university’s mission on certain things like the live mascot program, students can feel cut out and frustrated. How are we supposed to know that every dog is named Blue if they never told us?

Without clear expectations, the point of Butler Blue can feel confusing, especially when it seems like Blue IV’s reveal was strategically placed to soften the blow of the tuition increase that was announced the next day.

While we see lots of money being spent around us on campus — like the C-Club renovations, the new business building, and the additions to Holcomb Building and Gallahue Hall — the fact that we have to pay more still hits hard.

“As a student, you get a lot out of the new facilities,” Rohweder said. “I’m not blind to it, it costs a lot of money. Being a private university, there’s not a lot of ways to get that unless it’s from people paying or donations.”

Tuition increases are, unfortunately, a fact of life for most college students. The fact that the tuition raise was announced one day after Blue IV’s big reveal was funny — and likely uncoincidental — to both Rohweder and senior biology major Grace Wilson.

“Schools are a business, so they are going to do what they can to market themselves,” Wilson said. “There are obviously worse ways to do it.”

And it is true: the university uses Butler Blue to market the school. The mascot’s office is in Robertson Hall in the external relations department. The fact that the dog is used to recruit and sell prospective students and donors on Butler makes me view portions of that marketing agenda negatively.

However, the student body is there for it. Blue brings an energy to campus that would not exist without a dog in the mix, even if he does help the university turn a profit.

“It’s a huge tradition at Butler, and it means a lot to a lot of people,” Wilson said. “It really improves morale and Trip has a great brand on social media.”

One of the comments on Kaltenmark’s tweet sought to clarify the position once and for all: “Are people seriously mad about Blue?”

My answer to that is no — no one is mad about Blue. Okay, maybe some people are mad about the design of the Blue t-shirts in the bookstore, but that is a different — and appalling, if we are being honest — issue entirely.

In my view, the reason that there has been any backlash at all is due to a lack of communication surrounding the decisions of the university. It seems that this was a missed educational opportunity for the marketing department’s internal customers.

The more that people understand the inner workings of the mascot program, the more people will buy in. A simple “Did You Know” tweet from the official Butler Blue IV Twitter page would go a great distance to educate its seven thousand followers and create more awareness about why Butler Blue does things the way they do. Responding to concerns on a personal account was perhaps not the most effective way to communicate with the student body, though I understand where Kaltenmark is coming from.

When Rohweder met Blue with the swim team, she said he was not afraid despite the thirty-plus people surrounding him. Blue was looking up.

“He would make eye contact with you,” Rohweder said.