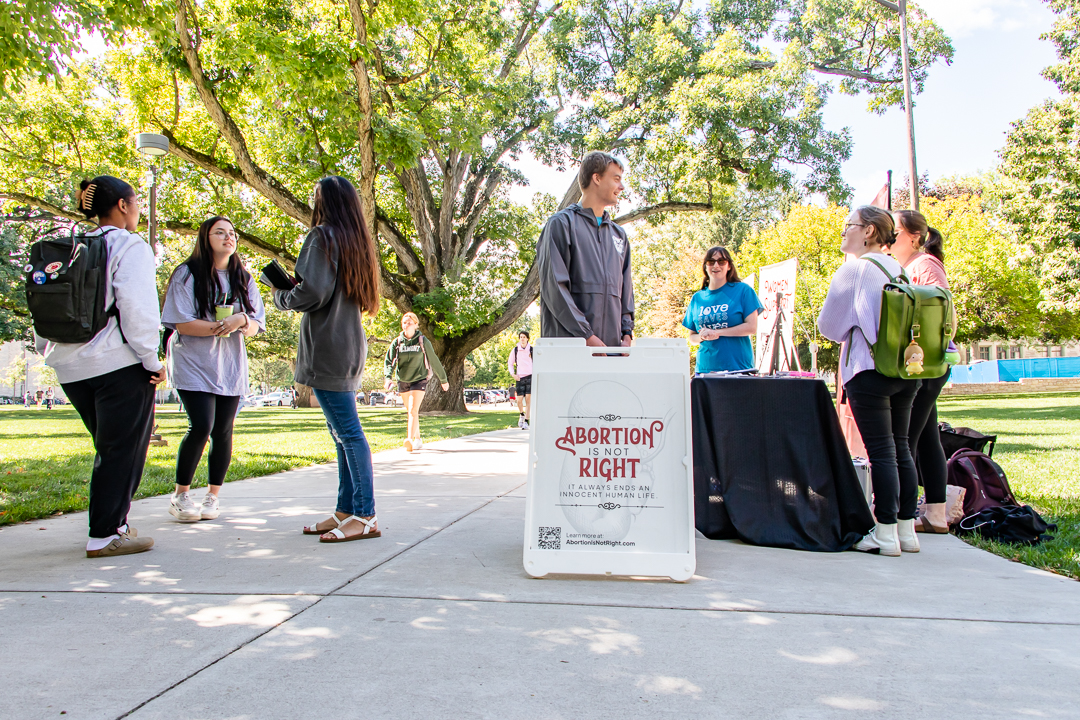 Bulldogs for Life held a tabling event on Sept. 22. Photo by Julian Cirnigliaro.

Succeeding the June 24 overruling of Roe v. Wade, the near-total abortion ban of Indiana Senate bill 1 was set to take action on Sept. 15. However, Sept. 22 saw a temporary halt on SB1, maintaining the legality of abortion in Indiana for now.

The debate over abortion in Indiana is lively, and Butler’s campus is no exception. The week of Sept. 19, student organization Bulldogs for Life — the Butler chapter of national anti-abortion nonprofit Students for Life of America — held a tabling event to promote their anti-abortion platform. On the evening of Sept. 21, representatives from the group chalked on campus with anti-abortion messages, and on Sept. 22, they held their tabling event near Starbucks titled “Abortion Isn’t Right.”

However, overnight, many of the group’s messages in chalk were scratched out or erased entirely.

Junior elementary education major Diana Ningen is the president of Bulldogs for Life. She said despite the erasure of the group’s chalking, she is “optimistic” the response means that students are actively thinking about abortion issues, as the group stated their primary goal of the event was simply to “raise awareness” of their beliefs and have discussions with students.

However, the group was still unhappy with the alteration of their chalking. Ana Severson, a junior music and chemistry double major, is the vice president of Bulldogs for Life; she found it “upsetting” but not surprising.

“We’re supposed to promote free speech on campus and promote opposing arguments and discussions, and having [the chalk] erased de-promotes that, and it doesn’t promote critical thinking,” Severson said.

The altering of the group’s chalk was controversial on campus, with many Butler students taking to social media to defend Bulldogs for Life’s right to free speech.

User @kretzke88 voiced her anger with the university over the issue, her story being reposted by Butler College Republicans as well as Bulldogs for Life itself.

“This is so disrespectful,” the user wrote. “If this happened to any other chalking on campus, Butler would be in outrage. It’s okay for others to disrespect my opinion, but as soon as someone disrespects yours it’s crossing the line.”

On the other hand, some students did not oppose Bulldogs for Life’s messages being altered. Savannah Schultz, a junior speech, language and hearing sciences major, was one such student. She personally perceived it as the exercising of free speech from pro-abortion-rights students.

“I mean, everyone’s entitled to their own opinions, free speech,” Schultz said. “I didn’t interpret it as being malicious — destroying the chalk — but just an expression of free speech … Even though it is technically rude, they were in the right to do it.”

Ningen said the group’s beliefs should be just as respected as any other viewpoints.

“We are nonviolent,” Severson said. “We are not advocating for anything that is harmful. So it’s just having that conversation — we feel that that dialogue should be open.”

During the tabling event, Bulldogs for Life provided materials discussing the abortion issue and the overturning of Roe v. Wade. Students of varying opinions stopped to discuss abortion issues with representatives from the club.

Sophomore biology major Mackenzie Yurchiak, who supports abortion rights, stopped with her friend, junior strategic communication major Genevieve Chandler, to speak with the group. She said that there was “a lot of arguing” at the beginning of their conversation and that one member of Bulldogs for Life did not appear to be thoroughly educated on the issues being discussed. However, she said that the conversation was “pretty good towards the end.”

“[One club member] interrupted us,” Yurchiak said. “She wouldn’t listen to us. We would try to bring up important points regarding abortion, and she would just shoot them down. But the other girl actually listened to us, and she helped us understand more of where her standpoint was.”

Chandler spoke to the club representatives alongside Yurchiak. She said the group representative was initially flustered, but they were able to have a more productive conversation after the club shifted its approach.

However, the majority of the students who engaged with the table already held anti-abortion beliefs. Many students purposely skirted or ignored the table, expressing hesitancy to interact with or even discomfort with the anti-abortion group. A GoPro was placed on the table, capturing the tabling event, because they were unsure how people would respond post-Roe v. Wade, the organization said.

Mary Carmen Zakrajsek, Indiana regional coordinator for Students for Life of America, was present at the tabling, having provided free resources to Bulldogs for Life for the event as part of the national organization’s effort to “recruit, train and mobilize the pro-life generation.” Most of the students she spoke to agreed with the organization’s anti-abortion views.

“The people who have actually had conversations have appeared pro-life,” Zakrajsek said. “The people who maybe walk by, or laugh, or make a comment and don’t stop to have a conversation, I would say, maybe they don’t agree with us. We are starting to have people vote on our display to help us keep track of where people stand on the issue.”

The physical board on the table allowed students to place markers to demonstrate their stance and “vote” on abortion. When the Collegian spoke to Zakrajsek during the first half of the event, anti-abortion votes outnumbered abortion-rights votes in a seven-to-one ratio. In contrast to this, Ningen and Severson agreed that a “significant portion” of the broader campus is in favor of abortion rights.

As a response to the chalking and tabling by Bulldogs for Life, student organization for gender rights Gender Equity Movement, GEM, countered with chalking of their own and a gathering by Star Fountain, promoting reproductive rights and resources.

Kiara Somerville, a junior software engineering and economics double major, is the treasurer of GEM. She said upon seeing the chalking by Bulldogs for Life, the executive board of GEM decided to take counter-protest measures to raise awareness and voice their opposition to Bulldogs for Life’s message.

“[Our goal is] to raise awareness on campus, for people to know that they still have options even if it might seem like they don’t, and for people to be aware and know that there’s people on campus that do support them and their decisions,” Somerville said.

While GEM wrote their own chalk messages in support of abortion rights, Somerville said the club’s executive team does not know who is responsible for altering the chalk written by Bulldogs for Life.

“As we’ve been chalking, we’ve seen some other people around campus either pouring water on [Bulldog for Life’s] chalk or scraping it out,” Somerville said. “But GEM has been trying to not specifically target [the student organization] as people — more [addressing] their messaging. So we’ve just been chalking next to [their messages].”

In the aftermath of the preliminary injunction against Indiana’s abortion ban, abortion clinics prepare to resume services, while Indiana Attorney General — Republican Todd Rokita — plans to appeal against the block. With students in Bulldogs for Life denouncing the temporary halt, to other students across campus celebrating, to the legal action across Indiana, the state of abortion rights ultimately remains yet to be seen.