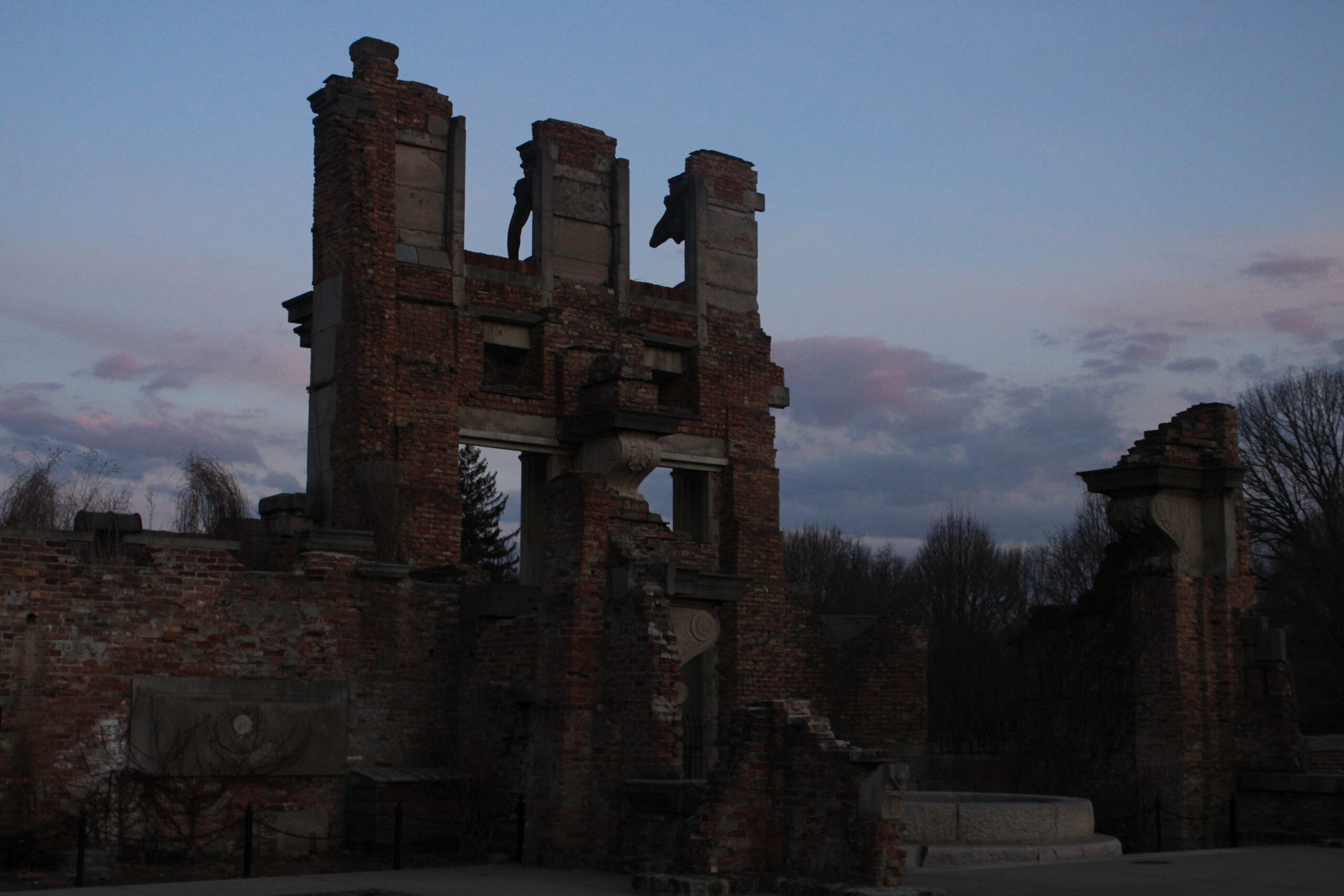 The Ruins’ facade and reflecting pool at sunset. Photo by Abigail Oakley.

As a university situated in the 14th largest city in the United States, Butler students have many opportunities for culture and entertainment. Despite many students who stay in the “Butler bubble” and are unaware of all Indianapolis has to offer, this city has a rich history of public and private projects to beautify the city and showcase its history.

The Ruins at Holliday Park

On a stroll through Holliday Park, one might encounter some trails, a playground, lots of green space and even the remains of a New York City skyscraper.

The St. Paul Building in NYC was torn down in the 1950s to make way for a modern skyscraper, but the building’s owners wanted to find a new home for the facade of the St. Paul Building. This facade included three statues made of Indiana limestone called “The Races of Men.” Shortly after the building was torn down, the owners held a competition in 1958 among cities across the United States to submit plans for the facade’s display and preservation. Indianapolis won the competition with the plans to create a structure in Holliday Park highlighting the original facade.

The facade is surrounded by Roman-style columns and pathways that weave through the structure. The original design included extensive landscaping and a reflection pool. The Ruins went through a period of neglect and decay which led to its closing for 20 years. However, in 2012 a revitalization campaign was started, which led to The Ruins reopening to the public in 2016.

Not only are The Ruins a historic spot, but they are also surrounded by plenty of green space. Lindsey Brooks, a sophomore business entrepreneurship major, said that this is a great place to have a calm day.

“It’s a cool spot where you can camp out and have a picnic or just read and enjoy the day,” Brooks said.

Whether for its history, beauty or calm environment, The Ruins can be a new place to explore. Check out the Holliday Park website for more information.

Newfields is well known in the Indianapolis area for its art and gardens, but one might be surprised to learn about the estate it includes — Oldfields.

Oldfields was a 26-acre estate including the Lilly House and its surrounding gardens. It was originally designed by architect and engineer Lewis Ketcham Davis for the Landon family in 1913. Later, J.K. Lilly Jr. hired the renowned Olmsted Brothers firm to design the landscape. It was designed in the French Renaissance Revival style with Renaissance-style gardens. The prominent families — such as the Lilly family itself — who have resided in the Lilly House, as well as its historic architecture and design, have helped the estate stand the test of time.

George Geib, a former history professor at Butler University, explained how Oldfields became what it is today.

“Over time, the family willed all of that property to the Indianapolis Museum of Art,” Geib said. “At that point, you could go over there and publicly see what a 20th century garden landscape looked like [for free]. Now, more recently, the art museum has gone through a reorganization. They’ve called themselves Newfields and put up admissions gates again.”

Now, the house and estate are included in Newfields’ larger property. The Lilly House’s first floor has been preserved, and the lower level has been turned into a museum to highlight the history of Oldfields. Both floors are open to the public with general admission to Newfields. Check out the Newfields website for tickets and more information.

The City Market has been known in Indianapolis as a unique shopping center with a variety of small businesses and vendors, from Bicycle Garage Indy to Root and Relic Flower Shop. However, what many might not be aware of are the catacombs underneath this shopping center.

The catacombs were originally built as the basement under the City Market and Tomlinson Hall — both built in 1886. Tomlinson Hall burned down in 1958, but the basement that survived became one of the largest catacombs in the United States. The 20,000 square feet of tunnels are connected by brick and limestone arches and were used by vendors to transport and store their products.

As the urban landscape above ground changed, the catacombs were no longer necessary. However, they have been preserved as a state landmark and can still be accessed today. Tours focusing on the architecture and history go through the catacombs during the spring and summer. These tours have select dates and limited capacity in order to preserve the catacombs. For tour tickets and more information visit the Indiana Landmarks website.

This city center has served as a symbol of Indianapolis, largely because of its iconic Soldiers and Sailors Monument. However, the circle itself has been an important aspect of Indianapolis for much longer.

When Indianapolis was officially settled in 1821, the original plans for downtown Indianapolis included a square mile grid with a circular street at its center. This would become Monument Circle, but it went through many changes before taking its current shape. It was designed by Alexander Ralston and was influenced by the designs of Washington D.C. and Versailles in France. Both designs have a central space surrounded by a Classical plan, a style of Italian Renaissance-inspired design.

After the initial layout was designed, the Governor’s Mansion was built in the city center in 1827. The building remained in public use until it was torn down in 1857, leaving the city center empty once again. Eventually, the plans for a monument to honor the Indiana Civil War veterans began to circulate, which led to the Soldiers and Sailors Monument in 1902. While this monument was originally created in remembrance of the Civil War, it became a symbol for the Revolutionary War and Spanish-American War as well. It was the first American monument honoring the common soldier.

Thomas Paradis, a professor of geography and community planning at Butler University, said that Monument Circle’s purpose has evolved over time, but it has remained an important symbol of Indianapolis history.

“Early on, I think its main purpose was more focused as a memorial,” Paradis said. “It holds some of that function. You know, it’s a cultural trace of what was important to society at that time.”

As a city that has been slowly developing since 1821, Indianapolis has many sites that show its evolution and progress. From its original downtown to more recent parks, there are a variety of locations that allow visitors to dive into the history and culture of Indianapolis.