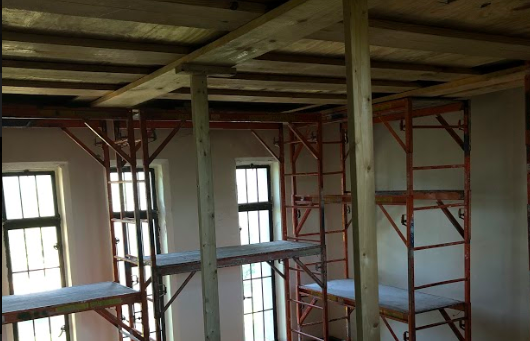 The third floor of Jordan Hall is under construction, again. Photo by Xavier Neier.

Currently, University Operations is fixing the ceiling leak in the west tower of Jordan Hall, the side closest to Fairbanks Building. These renovations restrict usage of the stairwell, as well as cause a disturbance to students and faculty in class.

The current construction can be seen on the stairwell stretching from the second to the third floor.

John Lacheta, presidential fellow in the office of university operations, said that all the scaffolding surrounding the stairwells is necessary to fix a leaking problem in the ceiling.

“It’s not as intense as it seems,” Lacheta said. “Rather, it’s simply regulation for how to get to the ceiling.”

Though the construction and everything that comes with it is necessary, some students are still bothered.

Though the construction and everything that comes with it is necessary, Jamie Christian, a sophomore secondary education major, feels that that construction is irritating.

“I have almost all of my classes in Jordan,” Christian said. “It’s difficult trying to fit 50 kids on half of a stairwell.”

She also mentioned that it “smells horrible.”

Emily Rapchak, a first-year finance major, said it gets a little noisy sometimes during classes.

With all of this construction and unhappy students, why not just take down Jordan and try again?

Lacheta said it’s not that simple.

He said Butler can’t change the exterior of Jordan. Butler is contractually and ethically obligated to keep Jordan the way it is because of its historical significance to the school. Because of these obligations, the outside of Jordan can’t be painted, for example.

Inside, they can only make minimal changes to the interior, such as adding air conditioning and making sure everything is still up to code.

“The building is almost 100 years old,” Lacheta said. “We are dedicated to keep it running. We are always trying to improve [Jordan Hall].”