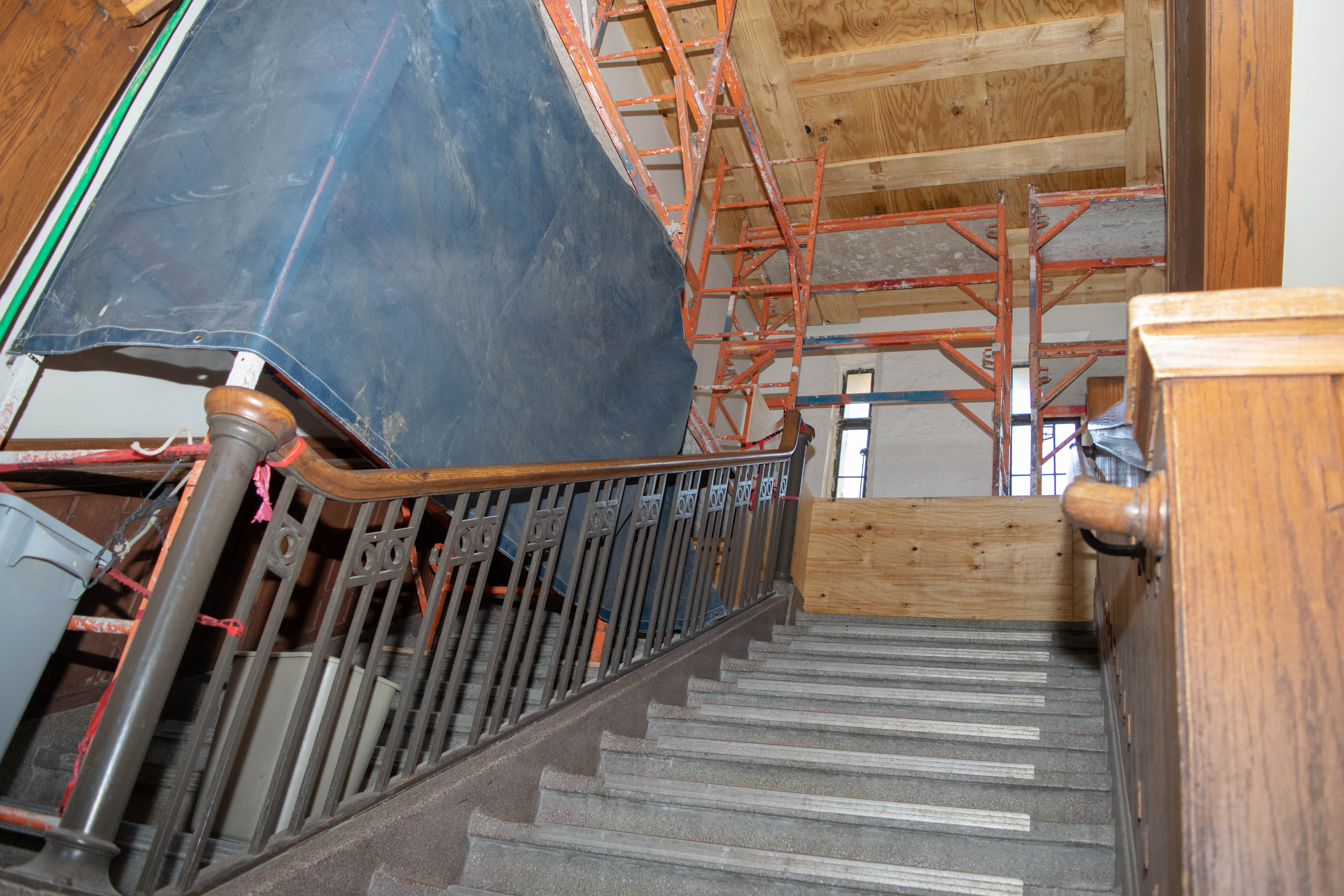 Gone is the white tarp and trash can at the bottom of the stairwell to collect water leaks in Jordan Hall. Photo by Mason Lovett.

The roof of Jordan Hall is undergoing an in-depth repair due to water leaks. The east tower stairwell between the second and third floor is split in two halves, one side for traffic and one side blocked for construction, as a result.

Students received an email on March 4 notifying them that the stairwell would be undergoing construction beginning that evening.

“Water leaks in Jordan Hall has been a long term problem and very complex due to the combination of masonry plus roof construction methods when this building was originally built,” said Doug Morris, assistant vice president of facilities.

The roof above the stairwell was removed to better investigate the leaks. Furthermore, the repairs will replace the roof’s drain and inject epoxy into cracks to fix leaks. Epoxy is a thermoset plastic made by multiple chemical compound reactions and is used for water leak prevention.

“We know that these improvements are only a portion of the necessary solution but should mitigate current leaking and minimize additional damage,” Morris said.

Students who frequently used the stairwell before spring break may have noticed the numerous short-term fixes maintenance made to keep water from the floor. Previously, a white tarp fixed to the ceiling and a trash can placed at the bottom of the stairwell collected water leaks.

John Gray-Smith, a sophomore political science major, has multiple classes on the third floor of Jordan Hall and has seen the damage the leaks have done to the historic building.

“It sucks that it’s in the middle of the year and not over summer where there is not a lot of traffic going through Jordan, but it’s finally good to see they’re making progress towards fixing it and making the building safe,” Gray-Smith said.

Gray-Smith said he has not seen traffic from the construction take up much of the stairwell. However, Gray-Smith himself is cautious about walking up the stairs and has not used the east stairwell to get to and from the third floor.

“I was really shocked they actually made a pathway through there, just because it seemed it might be a little unsafe to walk through which did worry me a little,” Gray-Smith said. “I would like to see them completely close it off. I would hate for me or somebody else to walk through there and something fall and hit one of us.”

Julia Kaufman, a first-year elementary education major, experienced the water leaks of Jordan on firsthand in her second floor classroom.

“Someone realized they were getting water dripped onto them,” Kaufman said. “The professor put a trash can under it and the rest of the class was distracted because all you heard was the drop of every water droplet.”

Morris said he is unsure of when exactly the improvements being made to the building will be finished, but expects it to be within one to two months.

“With a historical building like this we need to keep focused on continuous improvements but recognize that ongoing maintenance of these building components will always be necessary,” Morris said.