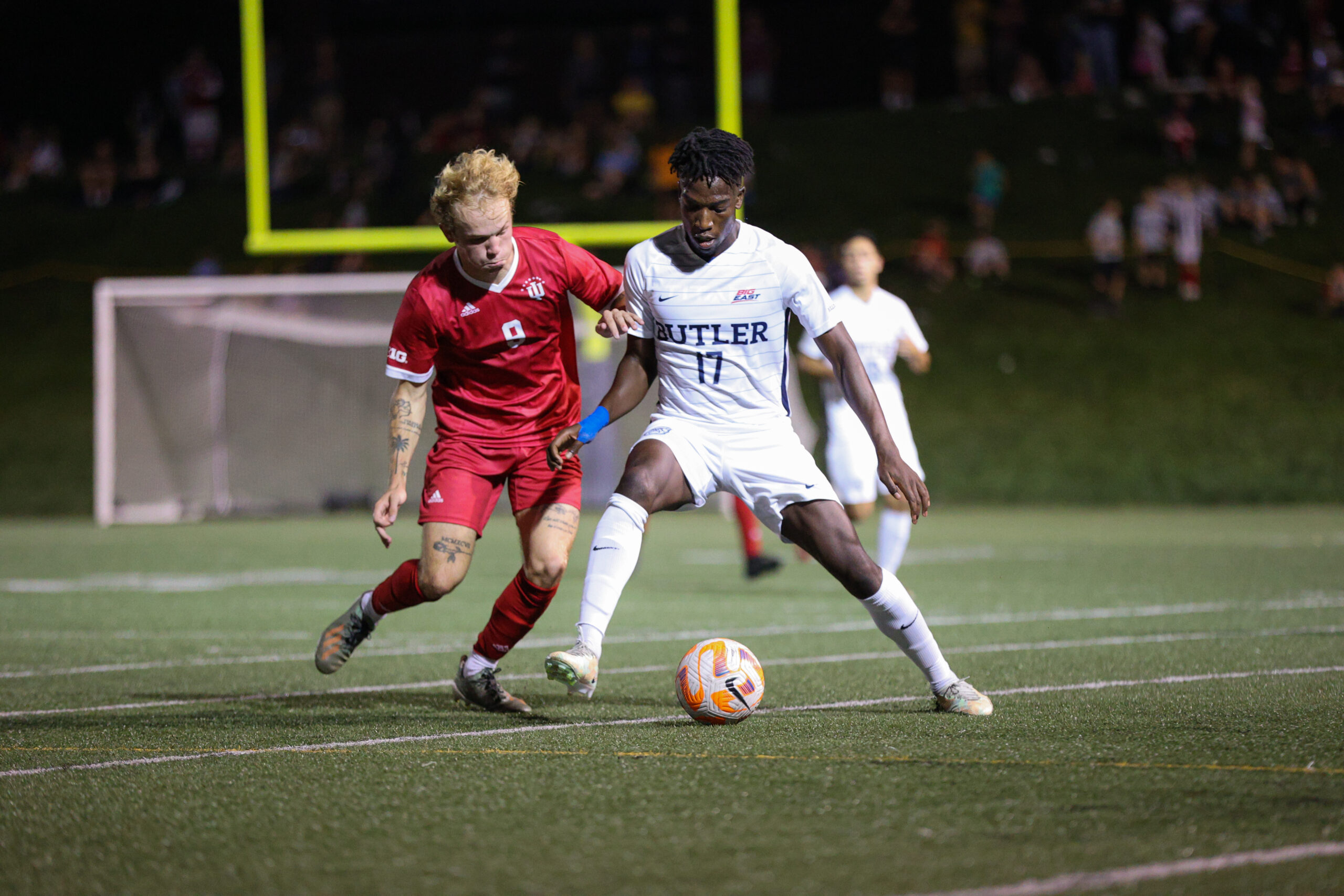 Sophomore forward Henri Kumwenda shields off an IU defender from possession of the ball during their matchup against Indiana on Sept. 14. Photo by Claire Runkel.

The men’s soccer team looks to extend their three-game win streak against a Georgetown Hoyas squad riding two-straight wins. The Bulldogs are currently the top team in Big East standings with a 2-0-1 conference record, while Georgetown is seventh. With 16 goals for and two goals against in their last three games, this Butler offense will look to build upon its recent success. This game kicks off at 7:00 p.m. from the Bud and Jackie Sellick Bowl. The broadcast for Wednesday’s match will be presented by Butler+ and can be streamed on FloSports or the Big East Digital Network, BEDN.

After a road win against Providence last Thursday, the women’s soccer team will look to continue their winning ways when they host the Villanova Wildcats. The Bulldogs struggled at home all of last month, winning only one game against Wright State on Sept. 1. Villanova is third in the Big East standings and .500 on the road so far this season, meaning the Dawgs will have their work cut out for them in this matchup. TopSoccer night at the Bud and Jackie Sellick bowl starts at 7:00 p.m. The game can be streamed on FloSports or the Big East Digital Network.

The women’s volleyball team is in search of their first home win since the Top Dawg Challenge in early August. While the Bulldogs are on a three-game Big East losing streak, none of these games have been in front of their home crowd. Both 1-3 in conference play, Butler and Georgetown will look to get on track in the Big East. First serve at Hinkle Fieldhouse is set for 6:00 p.m. This matchup can be viewed on FloSports presented by Butler+.

The men’s tennis team will travel to Muncie, Ind. to compete in Ball State’s Invitational tournament. The Bulldogs will strive to continue their success from the team’s previous trip to the Western Michigan Invitational, such as first-year Aiden William who earned All-Tournament Team honors. They will look to continue this success all weekend, from Oct. 7-9.

The Butler football team returns to the Bud and Jackie Sellick Bowl to host Dayton after two weekends on the road. The Dawgs are fresh off of a 31-0 shutout loss to Davidson in both teams’ first glimpse of Pioneer League action this season. However, Butler is undefeated at home this season and will look to uphold this record. The game’s theme will be Pink Out for Breast Cancer Awareness Month. Kickoff will be at 1:00 p.m. on Saturday and the broadcast will be presented by Butler+ on FloSports.

The football team won’t be the only squad competing in the Sellick Bowl on Saturday, as the men’s soccer team will host IUPUI at 7:00 p.m. This will be the men’s last non-conference game of the season. The Jaguars have struggled thus far, only winning one game this year. Saturday’s matchup will also be game two out of three of a three-game homestand. The game can be streamed on FloSports presented by Butler+.

The women’s golf team heads to Bartonville, Ill. for the Coyote Creek Classic hosted by Bradley University. The team will aim to place highly once again after doing so in their first two tournaments, including a first place finish at Illinois State. The tournament will tee off on Saturday and conclude on Sunday.

Butler’s softball team travels to IUPUI to compete in the final games of their fall season. The softball team has played three games this fall across Indiana. First pitch for game one of the double-header will be at noon with game two shortly after the first matchup.

The men’s tennis team will compete in day two of Ball State’s Invitational.

The women’s volleyball team is back in action for their second Big East game of the weekend — this time against the Villanova Wildcats. Similar to the Dawgs, Villanova is another Big East team under .500. This matchup’s first serve will take place at 1:00 p.m. in Hinkle Fieldhouse. This clash can be watched on FloSports presented by Butler+.

The women’s soccer team will play their second road conference game, this time in Chicago. This DePaul squad is currently winless in Big East play — one of two schools in the conference with a zero in the win column. Butler will look to pick up another road win at 2:00 p.m. on Sunday. This matchup can be viewed on FloSports or the Big East Digital Network.

The women’s golf team will compete in the second and final day of the Coyote Creek Classic at Bradley University.

The men’s tennis team will compete in the final day of the Ball State Invitational.

The men’s golf team will head east to compete in Xavier University’s Invitational. The tournament will take place in Maineville, Ohio at TPC River’s Bend. This invitational is for individuals only, so all golfers for the Dawgs this weekend will be competing on their own. This event will tee off on Monday and wrap up on Tuesday.

The men’s golf team will play on the second and final day of the Xavier Invitational at TPC River’s Bend.