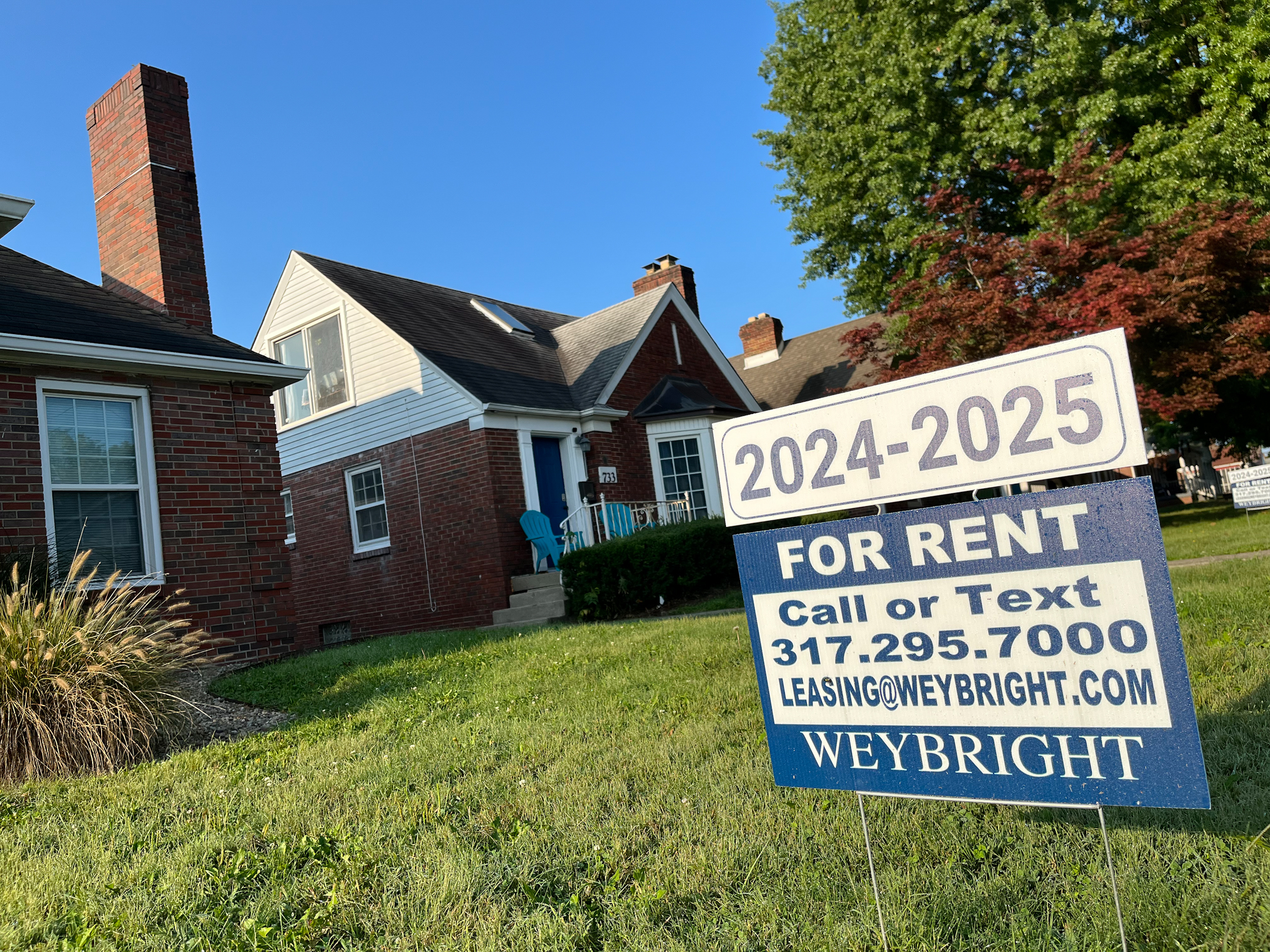 Houses near campus are a popular housing option for senior students. Photo by Julian Cirnigliaro.

I am a sophomore and recently signed a lease on my senior house for the 2024-2025 school year. Yet — just three months ago — senior houses weren’t on my radar in the slightest. The process felt like one big secret that I couldn’t know until the moment the lease-signing frenzy began. It’s time to let you in on the secret.

The first step towards signing a lease is finding your people. Senior houses around Butler’s campus usually hold anywhere from four to six people. I recommend finding people you live well with. They don’t need to be your best friend, but it’s always a bonus if they are.

Just because someone knows everything about you and is always there for you doesn’t mean they have the same living style as you. It is quite possible that your best friend is the messiest person on campus. Maybe they don’t ever put their laundry away. Perhaps they prefer a nice musty scent in their home. But if you would rather have a clean home, I recommend that — for the sake of your friendship — you do not live together. For many, this can be the most difficult part of the process — saying no to some friends but yes to others.

Rowan Dawson is a sophomore exploratory business major who signed a lease for her senior house during the second week of this school year. Having just gone through the house hunting process, Dawson is able to offer some sage advice on the topic.

“Have those difficult conversations [about your expectations] with your friends because you do want to make sure you’re all on the same page,” Dawson said. “You don’t want any surprises, so it’s worth having some awkward conversations … at the end of the day, you’re signing a contract.”

While finding a group can be stressful, it is essential to find people you trust who can agree on a price range, preferred location and other essentials before you start looking for houses. As Dawson pointed out, you’ll ultimately sign a contract with your future roommates two years in advance, so it’s best practice to communicate your expectations before legally binding yourself to the idea.

After making a group and deciding on a location and price range, you’ll want to find a landlord, realtor or leasing company to work with. Usually, students will reach out via email and then set up a time to tour houses.

Always ask older Butler students about their living experiences with your potential lessor. Not all lessors are the same. Some landlords are quicker to fix issues in a house than others. Some landlords don’t allow candles while others will say, “Light ‘em up.” Some landlords mow your lawn for you; a few landlords expect you to do that. All of these things could be deciding factors when you’re looking for a lessor. The house that you choose should be great when you tour it, but the landlord you choose needs to be greater. An excellent landlord maintains the “greatness” of their houses year-round.

Once you’ve found the landlord from whom you’d like to rent, they will show you the houses they have available for you. Another option to find a house is to look at the websites of bigger rental companies’ available homes. Finally, the simplest option for the bravest souls is to find a house you like, knock on the door, figure out the name of the current residents’ landlord and set up a tour or a meeting from there.

Seth Owings is a sophomore finance and applied business technology major who is in the house-hunting process. He had been touring houses for about two weeks when I spoke to him. Owings started by touring houses with Weybright — a major leasing company on Butler’s campus. Owings is early to the house-hunting game so he can find a house on the knoll which tends to go pretty quickly.

There will always be senior houses available to rent, but you may want to start looking sooner rather than later if your list of must-haves is a long one.

Owings initially chose Weybright because they owned plenty of houses on the knoll — the grassy strip of front yards that runs between the rows of houses on Berkley Road— which is where he and his friends wanted to live. After discovering that Weybright was out of his group’s price range, Owings started touring houses with another landlord instead.

Owings’ story proves that house-hunting is a financial decision as much as it is a lifestyle one. If the prices are too high, do more research and look into other lessors. Different lessors offer different prices, and if the price doesn’t feel right, you should never feel obligated to sign anyway.

Marney Sisson is a senior criminology and psychology major who currently lives in a senior house. Sisson signed her lease in September of her sophomore year but agrees with Owings that signing so early is not ideal.

“I think it’s kind of crazy how you have to sign for a senior house two years ahead of time,” Sisson said. “But I think it’s become the norm … because houses go off the market right away.”

Butler students have not always signed leases this early. In 2014, The Butler Collegian published a news article about the influx of sophomores signing leases for their senior houses two years in advance. Just eight years ago, signing early seemed like a new phenomenon, but now, as Sisson said, it’s the norm.

In 2017, The Butler Collegian published an article about signing senior house leases so early. A local landlord named Deborah commented on this article and recommended that students not sign a lease until they are completely committed to the house and their roommates. She suggested that there are more houses available than it seems. Deborah also encouraged students to ask current tenants about the landlord and house before committing themselves to a lease.

Ultimately, you’ll have to make a decision. Some companies or landlords will tell you to sign a lease within a few days of touring a house, but don’t feel pressured. There is always another house available if one falls through, and you should never feel obligated to rush into this contract.

I sent my deposit on my house a few days after touring, but I waited another week before signing my lease. I was in constant communication with my landlord to make sure we were on the same page and that his expectations were fair and reasonable. I also spent a lot of time on the phone with my mom before making my decision.

I give you this advice not to pressure you into signing a lease early, but instead to make you aware of the process. I felt lost throughout the process with no real guidance or experience in the matter, and I don’t want others to feel that way. There are plenty of houses, and campus apartments are also an option for seniors. You will certainly have a place to live your senior year.

If your group falls through after signing two years in advance, you have nothing to worry about. Dawson finds comfort knowing that there is always a way out of the lease.

“Even if you sign the contract, you can get out of it as long as you find someone else to fill your spot,” Dawson said. “I don’t see that happening, but that’s definitely [reassuring]. It’s not the end of the world.”

If you find someone willing to take your place on the lease, you can easily leave your senior house if something falls through. This process of finding someone to replace you on the lease after you’ve signed is called subleasing.

If you happen to be in a position where you do not have somewhere to live your senior year, signing onto a sublease is always an option. Many people desperately search for subleasers their senior year because of changes or situations they didn’t predict as sophomores when they signed — like graduating early or studying abroad. This is the worst-case scenario, though. More often than not, senior houses work out, and the planning and stress of finding a house will all pay off.

“I love [living in a senior house],” Sisson said. “It’s been so much fun living with six different people … all the stress about it is definitely worth it.”

So now that you know what to do, you have nothing to worry about. Follow these steps, and while you might still encounter a problem or two, Sisson promises it will all work out.