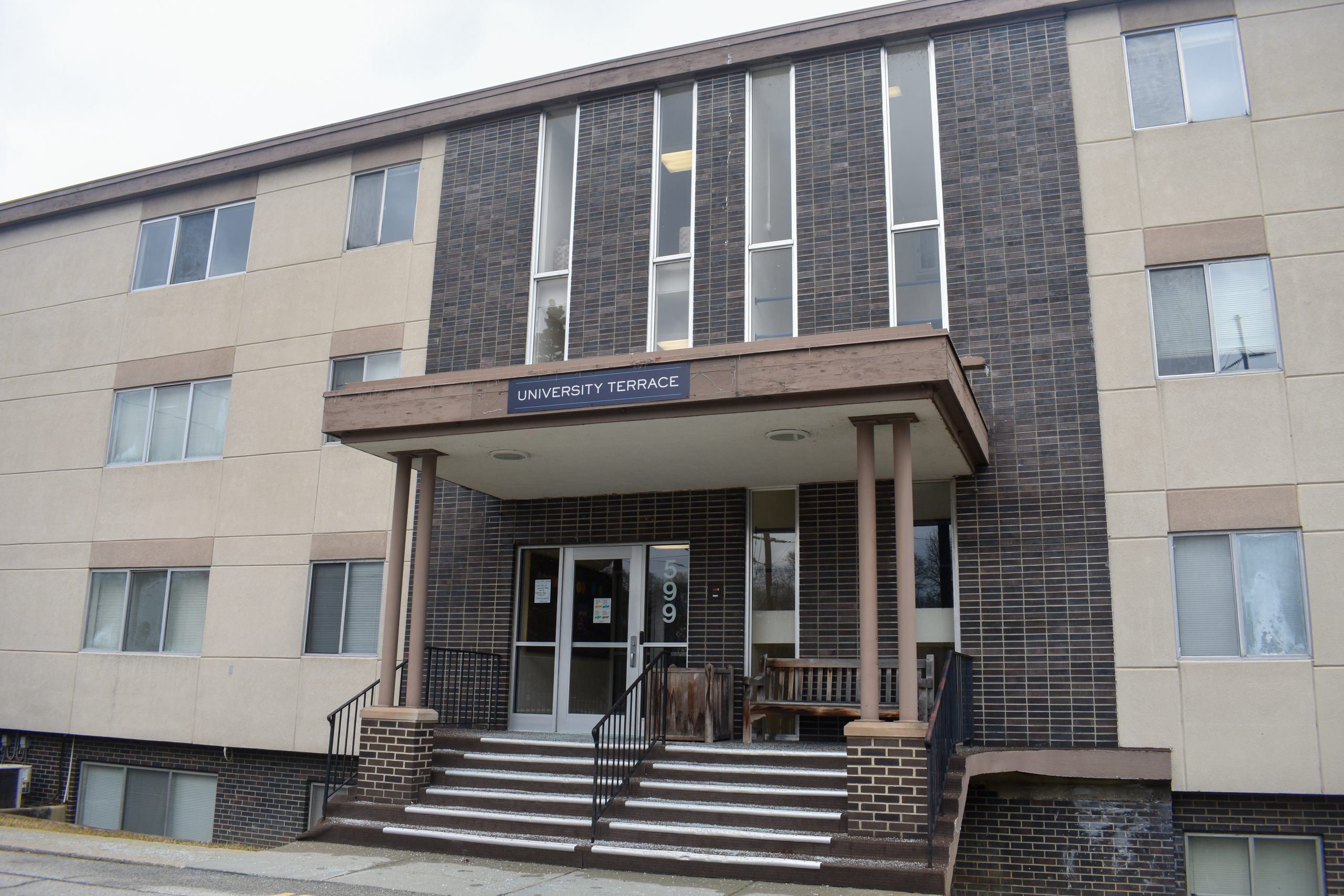 Pictured is University Terrace Apartments. Many students reside there during the school year. Photo by Lauren Jindrich.

University Terrace, one of the apartment complexes for juniors and seniors on campus, has seen around a 60% decrease in residents from the fall to spring semester. This exodus was largely due to the completion of the Lambda Chi Alpha Greek house.

Over the past two years, UT has housed students displaced due to Greek house construction. For the entirety of the 2020-21 school year, many Tri Delta members who were planning on living in the chapter house moved to UT while it was renovated and expanded.

For the fall 2021 semester, some of the Lambda members lived in UT while their new chapter house was being built. Now that their house is finished, there was a substantial decrease in occupied UT rooms this semester.

Interim director of Residence Life, Shannon Mulqueen, said this semester, there are just under 20 people living in UT whereas last semester there were around 50.

“The maximum capacity for UT is 115 people,” Mulqueen said. “This semester’s occupancy number is somewhat lower than in recent previous years, where UT has had between 70 and 80 residents.”

Ericela Sahagun, a senior anthropology and history major, said the Lambda energy was felt in UT, and that it has been weird adjusting to the much smaller community.

“You definitely feel that empty presence as soon as you walk in the building,” Sahagun said. “But I don’t know, it’s not something that I generally like, think about, I guess.”

There were some good things that came out of the downsizing for Sahagun, like getting the front spots for parking in the cold winter months and knowing she is not disturbing anyone with her loud music.

As a senior, UT was Sahagun’s first choice for housing because she knew she wanted to live in her own space. She did not know, however, that her apartment complex community would involve such a small group of residents.

“I can definitely see how living with few people would make it difficult … but I think that I kind of understood that as a senior I’ve established who I know [and] who I’m friends with,” Sahagun said.

Sophomore sports media major Blake von der Lippe stayed in UT for the fall semester, and now lives in the Lambda house. He said that the conditions were very standard for a college apartment complex, but there are some renovations that could be done to make the rooms nicer. For example, the windows were uncleanable, according to von der Lippe. He also said the elevator was broken frequently.

Sahagun and von der Lippe both said UT, in general, was a relatively clean and well-kept place to live. They also said that they felt safe and comfortable. However, von der Lippe did admit that his bike was stolen last semester.

Living in the apartment complex, von der Lippe did not interact frequently with many other residents besides his brothers and his apartment community assistant. Now with even less residents, Sahagun said she only runs into another resident in UT every once in a while.

The group of UT residents last semester was small, but they had some good memories made together. Von der Lippe said there were about three to four power outages in the complex during the fall. He recalled that a few of his fondest memories with other UT residents were playing yard games like tennis ball tag during those outages.

Even before the Lambda members left, Sahagun said living in UT was always much different than living in Residential College or Ross Hall. When living in Ross her freshman year and ResCo her sophomore year, she recalled seeing people all the time. Now, it is rare for her to see or hear anyone.

“As a freshman … I absolutely would not be able to do it. I mean, Ross [was] perfect. Because like, Ross, I mean, you probably heard this, like [there were] doors open all the time. Where there [were] people you can go talk to. That is absolutely not the case of UT, you will have to search [to find people] to see.”

Many students have questions about what will happen to this residence hall now that so few people live there. Von der Lippe said he would like a chain store or restaurant a bit closer to campus, and that land plot would be a practical place to put it.

Mulqueen is unaware of any plans to renovate the building or put something else in its place.