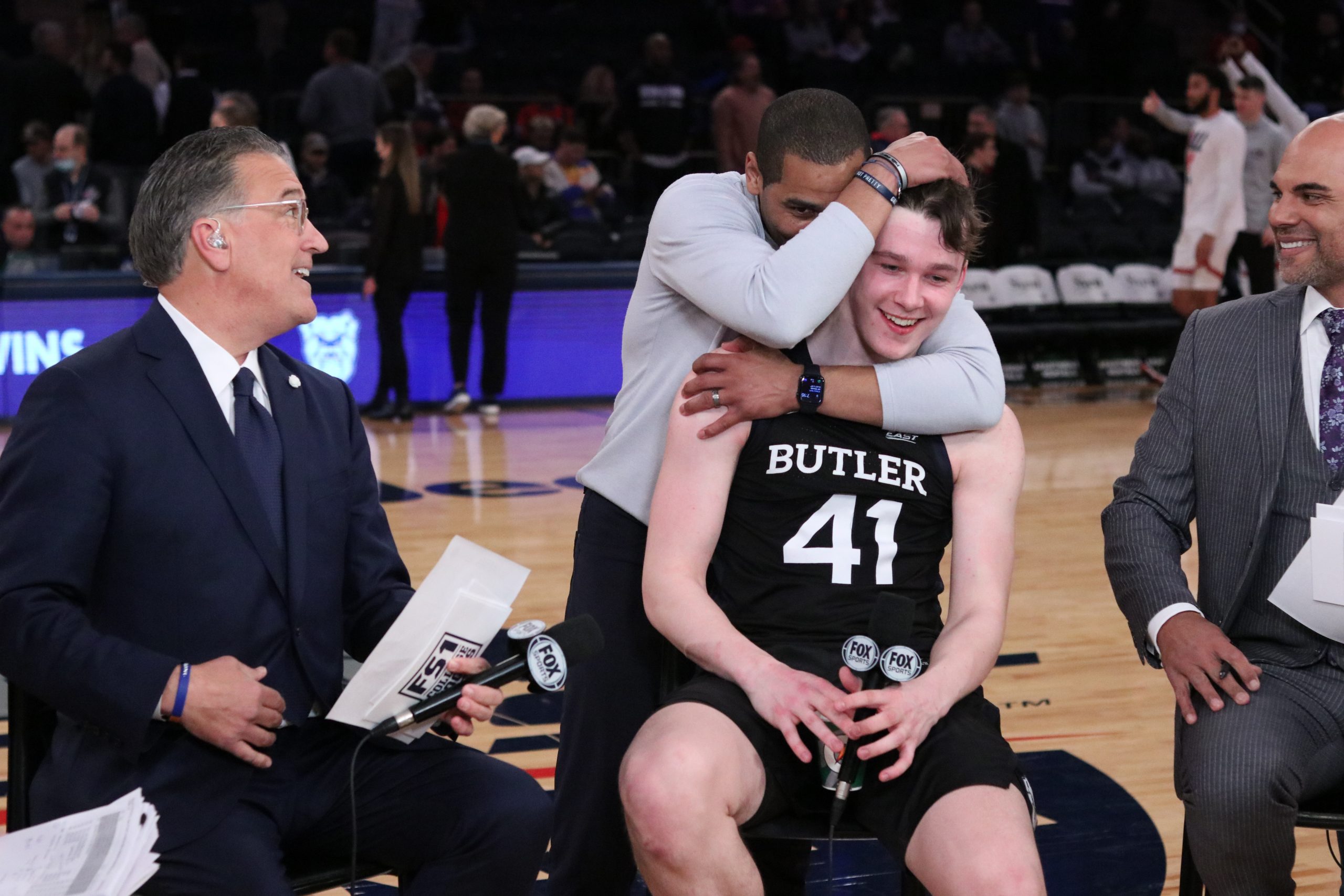 The Butler men’s basketball team advanced to the quarterfinals of the Big East Tournament with an 89-82 win over Xavier in overtime. Butler will play AP No. 11 Providence tomorrow, March 10, at noon.

Chuck Harris and Simas Lukosius combined for 56 points, with Lukosius scoring 20 points in the second half and overtime. A total of six players fouled out of the game, including Harris, Aaron Thompson and Bo Hodges — Butler’s three go-to playmakers. In their absence, Lukosius stepped up big-time. He tied the game with a pair of free throws with five seconds left in regulation to send the game to overtime. Lukosius then hit two big 3-pointers in the first minute of the extra period to give Butler a nearly insurmountable lead.

The fact that the game went into overtime was a miracle in and of itself. Xavier held a 66-60 lead with 52 seconds left and ESPN’s win probability gave the Musketeers a 92% chance to win. But Xavier proceeded to miss four consecutive free throws and allowed Butler a chance to get back into the game. Harris did just that, scoring six straight points in 28 seconds to tie the game at 66. But on the ensuing possession, Xavier’s Paul Scruggs converted an unbelievable scoop layup through a foul with eight seconds remaining. Scruggs missed the free throw though, Lukosius grabbed the rebound, pushed the ball up the court and was fouled by Scruggs at halfcourt with four seconds left in regulation.

The decision to foul a 90% free throw shooter when up by two makes very little sense, especially given it was Scruggs fifth of the contest. Regardless, Lukosius sank both clutch free throws, sent the game to overtime and eventually won Butler the game.

From start to finish, the only way to describe this game is “insane.” Both teams shot the ball poorly from beyond the arc, Xavier missed 16 free throws and Butler was forced to close a do-or-die game with a freshman who averaged six points per game in the regular season. Butler has no time to celebrate this win either, as the Bulldogs will be back in the arena to play No. 11 Providence just 17 hours after this game ended.

Before they do, let’s go beyond the box score in Butler’s wild tournament win.

Lukosius and Harris were simply unstoppable tonight. Harris scored 29 points in regulation, shooting 12-20 from the field. The crazy thing is, every single one of his missed field goals were 3-pointers — he went 10-10 on two-point field goals. 19 of his 29 points came in the second half where he shot 8-12 from the field. Harris was the key to keeping Butler in the game as it seemed like any time the Bulldogs needed a bucket, he delivered.

His performance was eerily reminiscent of last year’s first round matchup with Xavier, when Harris’ 21 points fueled Butler’s second half comeback and sent the game to overtime. After the game, Harris spoke on how that experience helped him and the team fight back again.

“I’ve been here before, in the exact same game, in the exact same situation, so just that experience and everything we’ve been through this year has like led us to this point honestly,” Harris said. “… It’s almost just another game for us at this point, we’ve been through so many battles this year on the national stage, so it was really just another game for us.”

The only blemish on Harris’ game today was him getting into foul trouble. Harris picked up his fourth foul with around eight minutes to play with Butler up 54-49. Xavier took advantage of his absence and went on an 8-0 run to take a three-point lead. Bryce Nze — who had 15 points and 15 rebounds — scored two put-back layups in the next minute to cut the lead to 60-58. Harris scored Butler’s next eight points to eventually tie the game at 66, before fouling out with eight seconds left as Scruggs took the lead. After that moment, it was Lukosius’ game.

Lukosius hit the two free throws to send the game to overtime and then scored Butler’s first 10 points in overtime to give the Bulldogs a 78-72 advantage with a minute and a half to play. Lukosius was leading the offense of a lineup that consisted of himself, Nze, Bryce Golden, Myles Tate and Jayden Taylor — a lineup that no one could have predicted would be closing out a Big East Tournament game.

Xavier played the foul game for the rest of the period, and Lukosius, Tate, Nze, Golden and Taylor each stepped up to the line and delivered. Winning a game in this manner is inconceivable, but somehow the resilient Bulldogs got it done.

Butler’s defense played well through large portions of the game, but there are still concerning aspects that held the team back. Butler’s perimeter defense was elite as they held the Musketeers to just 3-15 from three and Xavier’s top two shooters — Adam Kunkel and Nate Johnson — to 0-6 from deep and a combined 11 points.

While that certainly kept Butler in the game, the interior defense nearly lost it for the Bulldogs. The Musketeers scored a whopping 54 points in the paint, led by Jack Nunge and Zach Freemantle who combined for 38 points and 22 rebounds. Butler struggled to keep the pair in check, especially Nunge, and often resorted to fouling because they were out of position. Luckily for Butler, Xavier shot an abysmal 13-29 from the free throw line. The Bulldogs cannot expect Providence to shoot that poorly from the line, so it is imperative that the team does not resort to unnecessary fouls.

This excessive fouling had ripple effects on offense too, as Butler was forced to close the game without three starters and with another — Nze — sitting on four fouls. While Lukosius bailed Butler out, how the game played out is a bit concerning moving forward, given that Providence has a dominant interior force in Nate Watson, gets to the free throw line often and makes their shots from the charity stripe.

Butler has no time to rest or prepare for Providence, but the Friars don’t have much time to prepare either — especially given the fact that they, like most other experts, expected to play Xavier tomorrow. It is unlikely that either team will veer off from the way they normally play given the circumstances, which may be good for Butler.

The Bulldogs lost both games to the Friars this year, but both were very close. On the road on Jan. 23, Butler lost by just seven points to the eventual regular season Big East champs, in a game that featured three ties and 13 lead chances. Butler hung in with the Friars step-for-step, but a late surge by Providence and Nate Watson put the Bulldogs to bed.

The game in Hinkle on Feb. 20 was even closer. Butler led for nearly 36 minutes including by as many as 19 points in the second half, but the Friars climbed back possession by possession to eventually force overtime and snuck out of Hinkle with a one-point win.

Butler can absolutely beat Providence, and the two games this season show exactly how. If a couple of shots go Butler’s way instead of Providence’s, both of those losses could have easily been Butler wins. If Lukosius or Harris wake up tomorrow morning with the same fire they had tonight, the No. 1 seed in the Big East Tournament could be in trouble.

Fatigue will likely play a factor for the Bulldogs and it is unlikely that both Lukosius and Harris will be as hot as they were against Xavier. However, if tonight’s game should teach you something, it’s that anything can happen in college basketball when March comes around.