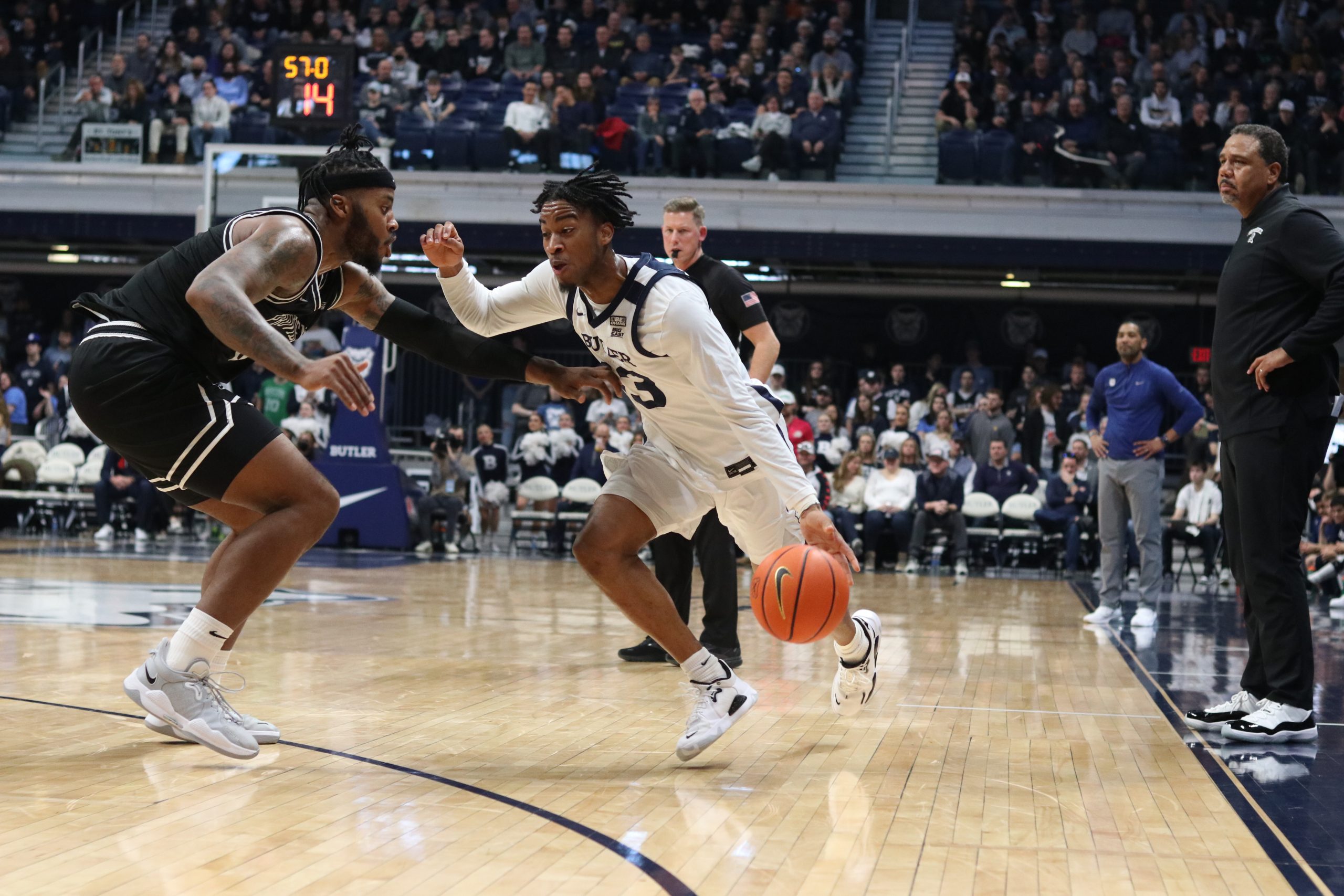 Jayden Taylor initiates a drive against Providence on Feb. 20. Taylor had three points and a block in Butler overtime loss to the Friars. Photo by Francie Wilson.

The Butler men’s basketball team is set to take on Marquette today with hopes of completing a season sweep of the Golden Eagles. This game marks the final road contest of the season.

The Bulldogs enter this matchup on a three-game losing streak — the fourth such streak this season — most recently falling on the road to Seton Hall. If Butler can execute in a similar manner to the first matchup with Marquette, they have a good chance of ending this losing streak.

Earlier this month, Butler poured in 85 points and 13 3-pointers against the Golden Eagles — both of which are season-highs — in the 85-79 win over then-No. 18 Marquette in Hinkle Fieldhouse. It was easily Butler’s best offensive performance of the season and is still Butler’s lone ranked win. Despite the great offensive efficiency, the Bulldogs still had to sweat the game out. After leading by 15 at halftime the Bulldogs allowed 52 points in the second half, and if it weren’t for clutch shooting down the stretch, the team would have yet another blown lead on their resume.

With just two regular season games remaining, time is running out in the lead up to the Big East Tournament. If there was ever a time for Butler to play their best brand of basketball, it would be right now.

Here’s what you need to know ahead of the clash with Marquette.

Who: Butler vs. Marquette

After a down season for the Golden Eagles last year, the program brought in Shaka Smart to turn things around, and he has done just that. There have been a couple questionable losses, but Marquette is in all likelihood heading to the NCAA Tournament. Marquette is currently unranked with 12 votes, which places them at 34 in the AP poll. The Golden Eagles have six ranked wins this season, including a season sweep of current No. 8 Villanova.

Their form hasn’t been as good as of late though, losing three of their last four games and the sole win coming against Georgetown who is yet to secure a Big East win. A road loss to ranked UConn is forgivable, but losses to Butler and Creighton hurt Marquette’s resume for March.

Marquette is led by redshirt freshman Justin Lewis who is second in the Big East in scoring and fourth in rebounds. Lewis has been very consistent this season, having just two out of 27 games this season not scoring double digit points. He led the attack in the first game against Butler, scoring 27 points and grabbing nine rebounds as Marquette fell just short of a comeback. That was his second highest scoring outing of the season.

It is crucial that Butler focuses on slowing Lewis down because he is far and away Marquette’s best offensive player. Yet not all the focus can be on Lewis. Marquette has the best 3-point shooting percentage in the Big East and torched Butler in that area in the first matchup, so playing tight perimeter defense is a must. As was seen in Hinkle, Marquette can get hot in a hurry, so minimizing those runs is what Butler needs to do to come away with a win.

With the Big East Tournament just 11 days away, every game will count towards where each team will be seeded when the entire conference congregates in Madison Square Garden.

The Bulldogs are the current nine-seed in the tournament and that is unlikely to change. Butler sits two games behind St. John’s and Xavier who are tied at seventh — with Xavier winning the tiebreaker — and a game and a half ahead of the 10-seed, DePaul.

To move up in the standings, Butler would need to win this matchup with Marquette, and follow up with a win over Villanova in Hinkle — a difficult but not impossible task given Butler’s stellar record against the Wildcats at home. However, because Butler will have played one more game than Xavier and St. John’s, one of them would need to lose all three of their remaining games for Butler to move up to the 8-seed. It is impossible for Butler to move up higher because Xavier and St. John’s play on March 2.

Even if this unlikely scenario played out, it wouldn’t make much of a difference. The eight and nine seeds play in the first round, so Butler would likely be playing the same team regardless. The more likely scenario that is still a long shot is Butler moving down to the 10-seed. For that to happen, Butler would have to drop their remaining two games and DePaul would need to win their remaining three. DePaul plays St. John’s, Marquette and UConn, so although it’s not impossible, it seems very unlikely that DePaul could sweep those three games.