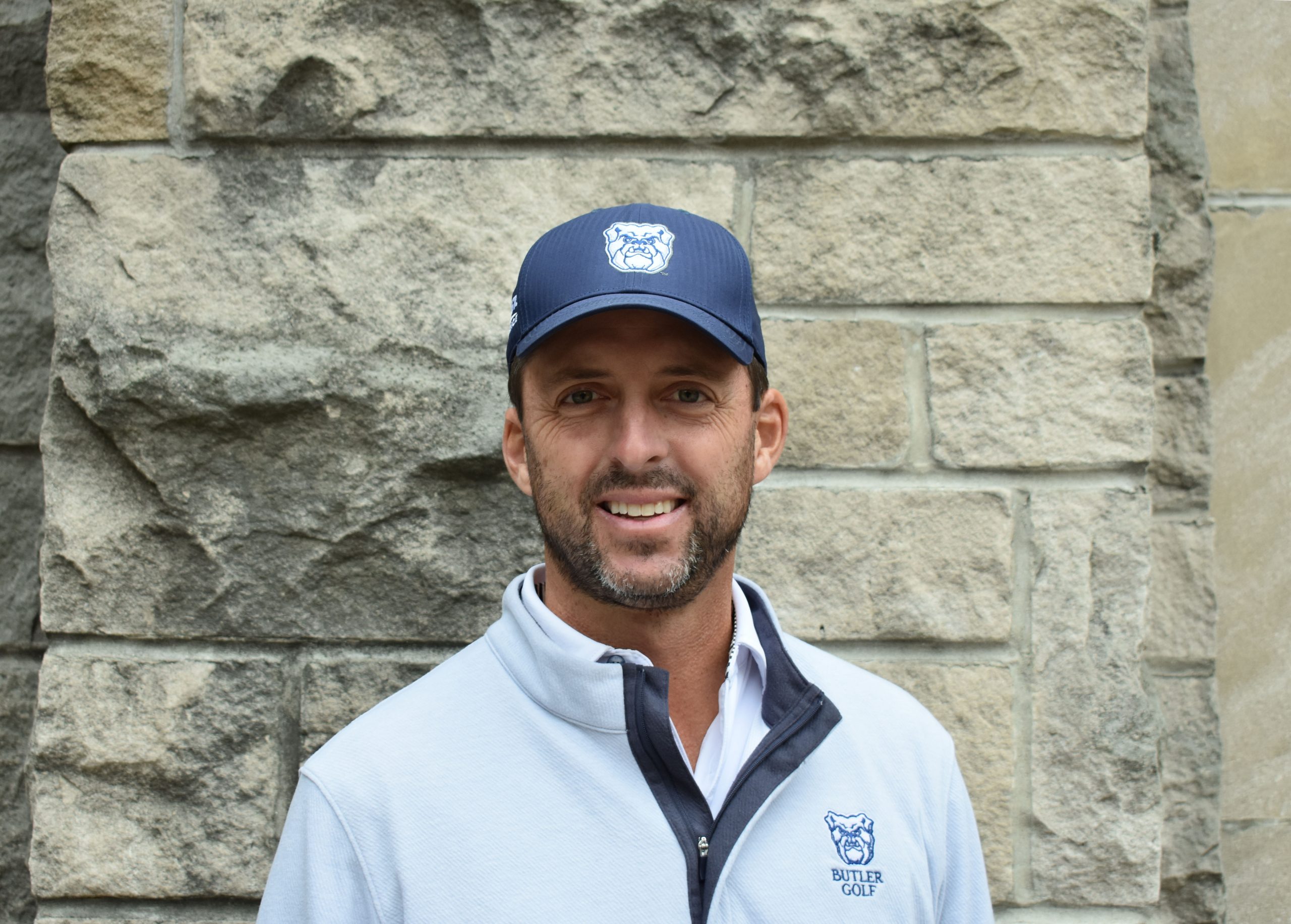 Colby Huffman took over as the men’s golf head coach for Bill Mattingly following the 2021-21 season. Huffman coached the IUPUI Jaguars from 2009-2015 before joining the Bulldogs as an assistant coach in 2020. Photo by Bailey Wydra.

First year Butler men’s golf coach, Colby Huffman, has been around golf his entire life. Due to his love for the game and his attention to detail, Huffman has had success both as a player and a coach.

Huffman has been the embodiment of passion when it comes to the sport of golf. The son of a former Purdue golf player, Huffman’s dad took his love of the sport and passed it down to his son.

“I started young because my dad always took me to the courses and played,” Huffman said. “When I got to high school, I made the freshmen basketball team*, but sat [on] the bench a lot. So, I decided to grind and work hard to be successful at golf.”

After high school, Huffman attended his father’s alma mater, where he too played golf for the Boilermakers from 1996 to 2000. After college, Huffman played professional minor league golf and even faced some opponents who are now on the PGA tour.

“One of the players I faced was Matt Kuchar, who got to play in the Ryder Cup one year,” Huffman said. “Playing against those guys was a real eye-opener because you still had to perform and pay the bills which is really hard because you don’t make a whole lot of money.”

Huffman enjoyed three years in the minor leagues before putting up the clubs. With years of experience under his belt and a master’s degree in kinesiology and biomechanics from Purdue, Huffman embarked in a different career path within golf — coaching.

Huffman’s coaching career has been adventurous to say the least. He has coached with the number one ranked women’s golf team in the world — the South Korean national team. During his two-year tenure from 2004 to 2006, the team never lost a match. Huffman’s ability to mentally prepare his players and teach them to focus on their technical skills was a valuable part to the team’s world-renowned success.

After spending three years with the South Korean women’s team, Huffman was hired as the leading instructor for Hank Haney’s international junior golf academy. Haney stepped down from the role to coach legendary golfer Tiger Woods. When asked about Huffman during interviews on the Golf Channel, Haney called him “the ultimate coach.”

In 2009, Huffman returned to the state of Indiana and took a job as an associate head coaching position for IUPUI. Taking this position was an opportunity for him to compile all of the knowledge he has amassed from playing and coaching and disperse it in the form of useful training and instruction for the Jaguars.

“It was such a neat experience because we didn’t have the resources like the bigger schools we were facing in these tournaments,” Huffman said. “We just had guys that wanted to work with me and learn as much as they can and we were getting the results that were worthwhile.”

In 2012, Huffman was awarded PGA teacher of the year for the state of Indiana at the age of 35, making him the youngest coach ever to win it. IUPUI would go on to win seven regular-season tournaments, the most of any Division I school that season. The Jaguars also had the best team performance for the entire 2012 season when they shot 19 under par at the Primm Valley Golf Club in Las Vegas. Huffman’s last season with the Jags came in 2015.

After stepping away from IUPUI, Huffman continued to stay within the coaching realm. He made special appearances on the Golf Channel, while also being recognized as a two-time national golf coach of the week.

Going into the 2020-21 golf season, Huffman was brought on as an assistant coach for Butler by former coach Bill Mattingly.

“I have been friends with Colby for so long and I brought him on as an assistant last year,” Mattingly said. “I know he is going to do a great job because he has a great coaching style and knows so much about the sport.”

Over the summer, Mattingly retired after 14 seasons and Huffman was hired as the new head coach of the Bulldogs.

“I have to trust the process,” Huffman said. “I have a four-year plan I have explained to my recruits, players and athletic department and a lot of that is coming with developing the small things and the mental game.”

The fall season ended in mid-October and the team had drastically improved with each tournament. During one of those tournaments, redshirt first-year Daniel Tanaka broke the record for the best individual performance for a Butler men’s golf player. Performances like these are what give Huffman and his team confidence to make playoff runs in the near future.

“The team had some great individual performances,” Mattingly said. “The team has the capability to be a threat in the Big East tournament if their good nucleus continues to play well.”

After being so accustomed to Mattingly’s coaching style, players like graduate student Nick Williams are starting to adjust to Huffman’s new approach.

“With Mattingly he was more hands-off and allowed us to focus on what we thought we needed to work on,” Williams said. “But with Huffman he is more hands-on with drills and different skill work.”

Even with the awards and the titles, Huffman has developed not just a passion for the sport of golf — the game he learned to love from his dad — but a passion to develop his players into the best person they can possibly be.

“Winning a National Championship is a part of my plan here,” Huffman said. “But the other part is making my players great people to be around. Usually when people say ‘That was a good year,’ I won’t know if it was until 20 years from now, when I find out what kind of people my players are.”

* Editor’s Note: Huffman’s first quote was originally misunderstood as him sitting on the bench in golf his freshmen year, not basketball. It has now been edited to clarify his true situation.