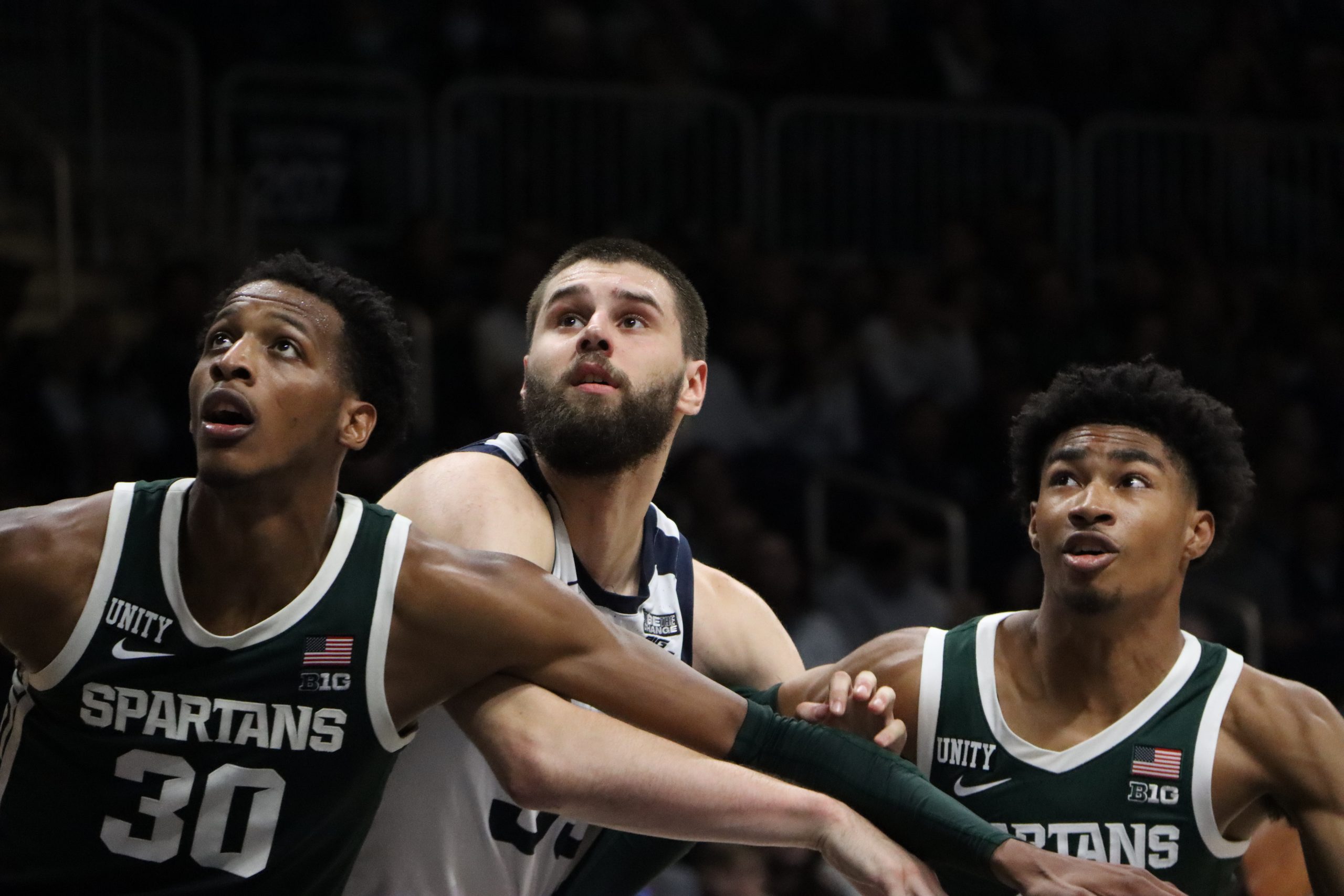 Bryce Golden is sandwiched by two Spartans during a free throw on Nov. 17. Now, the Bulldogs take on Texas A&M in the Maui Invitational on Nov. 23. Photo by Francie Wilson.

After falling to Michigan State and No. 12 Houston, the Butler men’s basketball team now finds themselves at 3-2 on the season. Now, they are in the loser’s bracket of the Maui Jim Maui Invitational and are set to face Texas A&M, who lost to Wisconsin by 11 yesterday.

On paper, these are two evenly matched sides, but not much has been learned about either team so far. Both teams have beat the cupcake teams at the beginning of the season, and have faltered against team’s clearly better than them. Now it’s time how good the Bulldogs and the Aggies actually are.

Here is what you need to know ahead of the matchup:

Who: Butler vs. Texas A&M

It’s no secret that the Bulldogs have not played well the past two games or even the first halves of their first three games. It’s a team with a lot of talent, but head coach LaVall Jordan has yet to find a lineup that consistently works on both sides of the ball. It doesn’t help that Butler’s best big, Bryce Nze, suffered a partially torn labrum — a nagging and painful injury — and is out for the foreseeable future. This injury has exposed an already weak interior for the Dawgs. Perennial starter Bryce Golden has scored just one point in the last three games and turned the ball over four times yesterday versus Houston. Golden does not look like his normal self right now on the court, and Butler needs him to be.

Last year’s leading scorer Chuck Harris has also struggled the past two games, scoring just 16 total points on five of 22 from the field. He wasn’t able to consistently get past the fast and physical defenders of Michigan State and Houston, and was forced to settle for long, contested jumpers. Butler needs to find a way to get him open shots so he can get into rhythm, because he is the team’s best scorer.

There is one Bulldog that has been playing well though, and that’s sharpshooter Jair Bolden. Coming off the bench, he has scored 16 or more points in three games this season, hitting four 3-pointers in each. He scored Butler’s first 11 points versus Houston, and was the only reason the Bulldogs weren’t down 30 at halftime. Houston committed to slowing him down in the second half — which they did — but it allowed for other players to get open and get good looks. Bolden has been a streaky shooter throughout his career, but he’s hot right now, so Butler should ride that wave against the Aggies.

Texas A&M have employed the same starting lineup in each of their first four games. Three 6-foot-2-inch guards start — Tyrece Radford, Marcus Williams and Andre Gordon — along with a 6-foot-8-inch forward, Henry Coleman III, and 7-footer Javonte Brown. The Aggies starting three guards plays into Butler’s favor, because the last two games Butler has struggled massively in the paint.

Brown may be a problem, but the freshman only averages 10 minutes a game this season and has taken five total shots. Head coach Buzz Williams may elect to use him more against Butler’s poor interior defense, but Coleman III — the Aggies leading scorer — is the one the Dawgs should be more worried about.

Kenpom, the genius of collegiate basketball, has these two teams neck and neck in his ratings. Butler sits at 78 and the Aggies are right behind at 79. For context, Houston is ranked sixth and Michigan State is 20th. This should be a good barometer for how good the Bulldogs are, and could be the game to get Butler back on track.