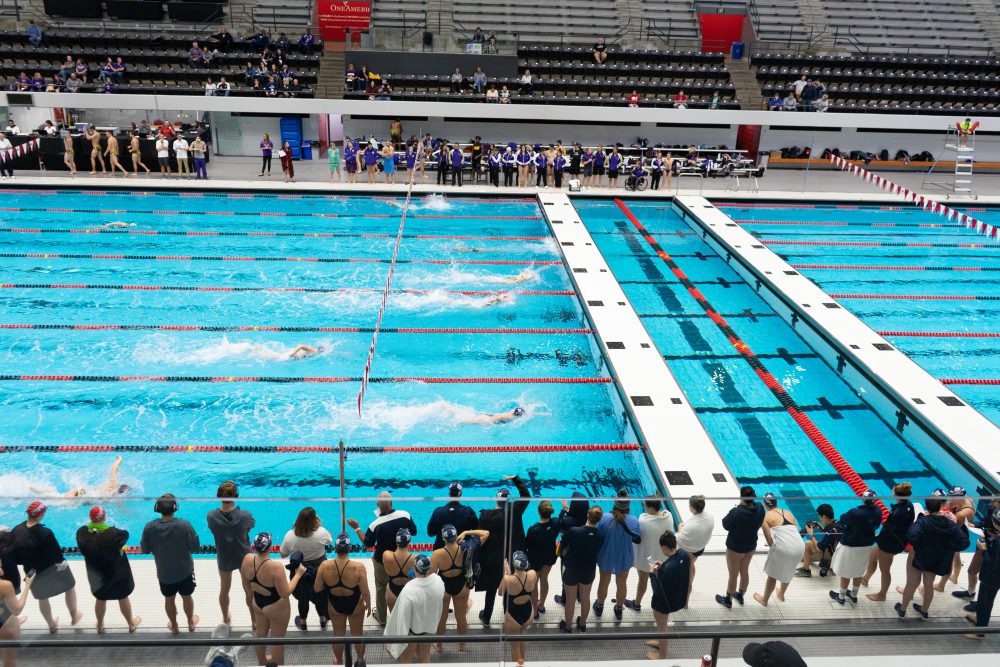 The women’s swimming team competes in a meet in 2019. Collegian file photo.

This week, sports reporter Katerina Anderson sat down with four first-years on Butler’s women’s swimming team. Three out of the four of them are from out-of-state and two out of the four despise country music.

Alani Hightower is a 5-foot-4 swimmer from Indianapolis. Alani swims the individual medley, butterfly, freestyle and backstroke. Alani is a psychology major and one item on her bucket list is to take a girls trip to Europe. Photo by Bailey Wydra.

Katerina Anderson: How is the upperclassmen and lower classmen team comradery?

Alani Hightower: “They’re amazing and that’s what I came here for. When I look at them I don’t even look at them like juniors and seniors. I just look at them as people that I look up to, but it’s almost like a family thing like a big sister type of thing. Even [with] personal things outside of swimming, like they’re there within the pool, in the weight room, and outside of swimming which is amazing. It’s made our process a whole lot easier.”

KA: Do you have any role models?

AH: “This is probably cliché but Simone Manuel, there’s not a lot of people of color in swimming. Just seeing her do so well and not let outside world stigmas get to her like I think that’s honestly really powerful and I really look up to that, so she’s always been somebody I’ve looked up to. I met her and she’s very nice and everything about her you can tell the way she carries herself on TV but then in person it just like goes very far like she doesn’t act like an ass just because she’s an Olympic gold medalist. Very humble.”

AH: “I would say… nobody judge me for this…a pickle, flaming hot cheetos, and those Arnold Palmer cans or if not them then like Twix but that’s like go crazy.”

KA: How did Butler stick out to you compared to other schools you visited?

AH: “There’s a lot of schools with that DI title… that just want you there for a number or just want you there to swim and swim fast like it’s not just that. The atmosphere, how they treat us as student athletes, like I feel like I could better myself here no matter what the title that we get as athletes. It felt like home and I’m sure when most people commit that’s how it feels but Butler really gives off that at home feeling and that like, ‘I’m here to set you up for life in the best way possible’ and that’s why I chose here.”

KA: How did COVID-19 affect your senior year swim season?

“I didn’t get the senior year that I wanted and the thing is we got back from our pandemic towards the end of 2020 and we’re at the end of 2021 now and still have a lot of work to do, but nobody ever gave up and I respect everybody for that.”

Sophia Guyer is a 5-foot-6 swimmer from York, Penn. Sophia swims the backstroke and the individual medley. Sophia is a business major and one item on her bucket list is to see the pyramids in Egypt. Photo by Bailey Wydra.

KA: Did you always know you wanted to go to a DI school?

Sophia Guyer: “Personally, if I’m being honest, like my freshman year of high school I was like ‘yeah like I wanna go DI’ like my mind was wrapped around this whole concept of DI and then I got into my junior year and you realize the division doesn’t matter. It’s like you put your school first and what you want to do for the rest of your life first and like the swimmings just a bonus. Which is how I saw it and I knew I loved being on a team and all I wanted to do was just be on a team with a family didn’t matter if it was DIII, DII, DI, NAIA, whatever. I knew I just wanted to be on a team and Butler just happened to have that DI title, but to me it’s just a title like just being a part of a family is what I cared about most and I’m so glad I found it.”

SG: “A$AP Rocky till the day I die. I’ve loved A$AP Rocky since like middle school so he’s always been my favorite and will be.”

KA: Do you consider yourself an introvert or an extrovert?

SG: “I’m pretty extroverted, I make conversation with everybody. I’m not afraid to ask questions or get to know people. That’s actually one of my favorite things, just learning more about people. It’s really easy here because everyone here is genuinely nice.”

KA: How difficult has it been juggling both academics and athletics since coming to Butler?

SG: “For me it’s definitely time management, like trying to figure that out because it’s a lot different than high school. In college you definitely have only two or three classes depending on your course load, but the homework is a lot like I know for me I have a lot of reading to do. Waking up early hasn’t been a problem for me because I did that all of high school, so that’s not necessarily the problem it’s more of like trying to find time to settle and do your work and plan out your day. In high school you had you know your normal schedule of an 8 hour day but in college it’s different everyday, so for me it’s more the self discipline of just sitting down and planning out my day.”

Gianna Leffler is a 5-foot-6 swimmer from Mayfield Village, Ohio. Gianna swims the backstroke and the freestyle. Gianna is a business major and one item on her bucket list is to travel to Greece. Photo by Bailey Wydra.

KA: What do you miss the most about your hometown?

KA: Who do you draw inspiration from?

GL: “My grandma who ended up passing away when I was in seventh grade, she was the one that put me in swimming when I was really young and always made sure that I stuck with it even though I did a lot of other sports. So it was kind of random in my family for someone to be a swimmer, like no one else in my family was a swimmer so she always pushed me and she always made sure I had like, the best suits, the best goggles, like none of that matters but she was always there. She was my number one supporter and she always has been even when she passed away and obviously she’s not here to watch me swim in college, but she’d be super proud of me so I always wanna look up to her and make her proud.”

KA: What’s your favorite TV show? What are you currently watching?

GL: “My favorite TV show of all time is Grey’s Anatomy. I’ve watched every season so many times, I could tell you anything about it. I’m not watching anything currently.”

KA: What do you think people underestimate the most about swimming?

GL: “There’s not a lot of people in swimming that are naturally gifted and are able to do the things that we do and that requires a lot more hard work and like technique training that helps us get to where we’re supposed to be. So we have to work 10 times harder than, not saying than other sports, but a lot of us aren’t naturally gifted.”

KA: What has been your biggest adjustment since coming to college?

GL: “I would say for me it’s the timing that’s different. In high school we had athletics after the school day was over. At least in my schedule I have classes before I go to practice and after I go to practice, so swimmings in the middle of the day for me and I still have to do school before and after that so I think the most difficult part transitioning from high school swimming to college swimming is like planning out when you have time to do your homework, go to class, eat before practice, eat after practice, just because for me practice is in the middle of the day when I’m used to it being at the end.”

Avery Piel is a 5-foot-8 swimmer from Red Bud, Ill. Avery swims the butterfly. Avery is a biomedical engineering major and one item on her bucket list is to scuba dive. Photo by Bailey Wydra.

KA: What goals do you have for yourself this season?

AP: “Personally, my one goal for this season is to make a final, like not a final like the best one but a singular final at Big East, which is like our championship meet and obviously improve my times but that’ll come with it.”

KA: What meet are you looking forward to the most?

AP: “My club coach is the swim coach for [Saint Louis University] and I trained with the guys on that team. They trained with our club team over the summer so I’m excited to see them race cause I want them to do well too but it’d just be nice if we beat them.”

KA: Who is your celebrity crush?

AP: “I would say Morgan Wallen, I’m in love with him. Listening to country music with the windows down just reminds me of home too and everybody where I’m from everybody loves him.”

KA: Who’s your number one supporter?

AP: “Mine would be either of my parents. Nobody in my family swam before and even though they didn’t understand it they’ve been super supportive. Obviously, before I could drive I needed somebody to drive me that hour to and from practice at four in the morning, and they were always willing to do that for me and I played other sports too and they were super supportive in that but they knew swimming was the one that meant the most to me and they were always there for me for that. Even outside of swimming they always supported my decisions and tried to raise me the right way and have always been super supportive of everything I’ve done.”