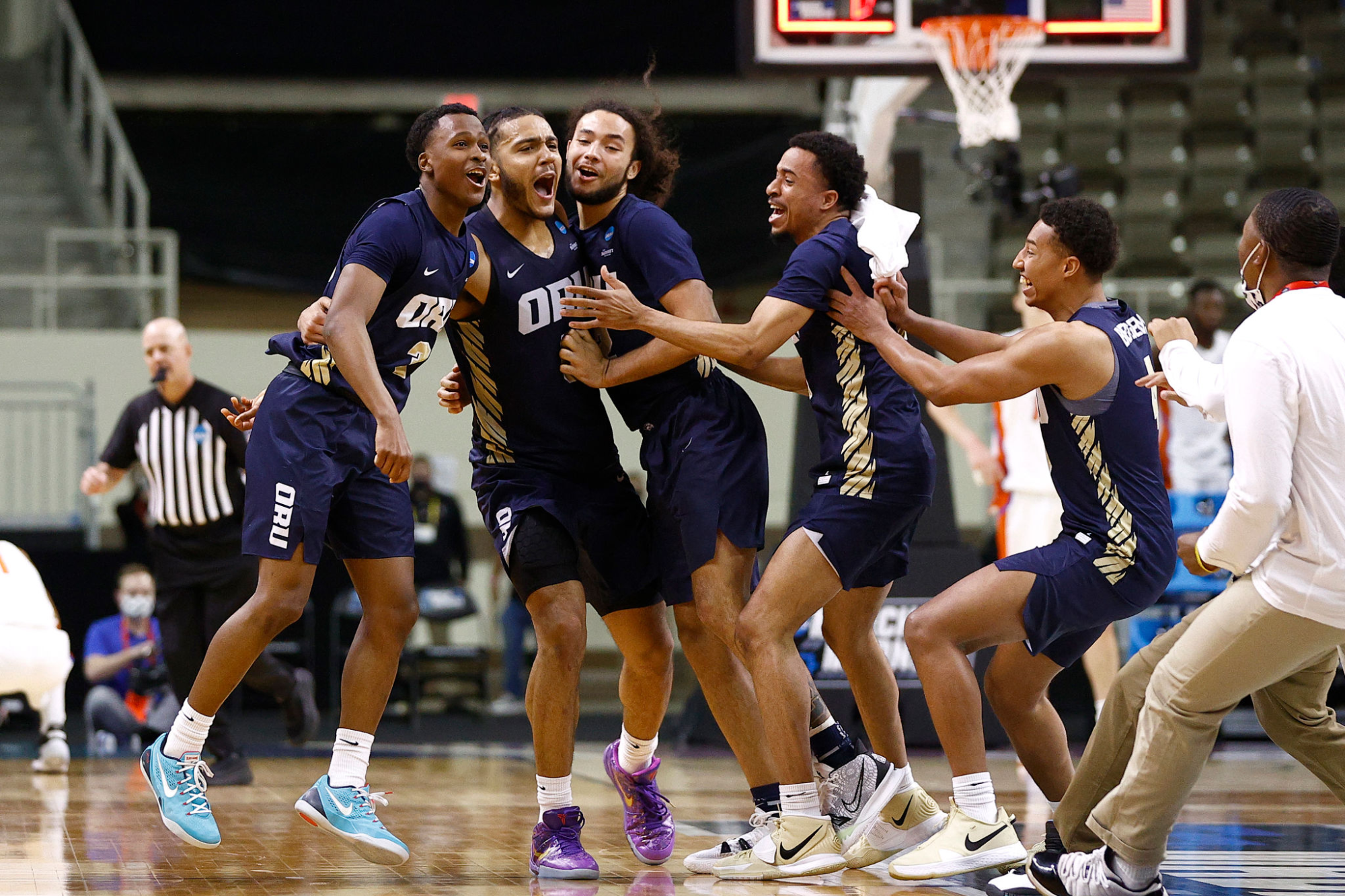 Oral Roberts players celebrate after defeating Florida in the second round of the NCAA tournament on Sunday, March 24. ORU becomes the second 15-seed to make the Sweet 16 in NCAA Tournament history. (Michael Conroy / Associated Press)

March Madness is one of the most exciting sporting events of the year, and this year’s tournament has been an especially enticing one. The COVID-19 pandemic caused the 2020 tournament to be cancelled last March, making this year’s tournament all the sweeter. On top of that, the entire tournament is being played in Indianapolis and the surrounding area, including at Butler’s Hinkle Fieldhouse.

The best part of the tournament is the first and second rounds, and they did not disappoint. With 48 games in four action-packed, upset-filled days, it would be a lie if I said I didn’t spend the majority of my weekend sitting on my couch, eyes glued to multiple TVs in front of me. In case you didn’t spend four straight days binge-watching college basketball, here’s what you missed from the chaotic opening weekend.

With Hinkle Fieldhouse hosting NCAA Tournament games for the first time since 1940, this undoubtedly represents a golden opportunity for Butler. For the two weekends Hinkle is hosting games, millions of people from across the country have the opportunity to familiarize themselves with Butler University and bask in the history of Indiana’s basketball cathedral.

This is also a great opportunity for college basketball fans from across the country to see their team play at a unique arena they would not normally get a chance to visit. A perfect example of this is legendary play-by-play commentator Jim Nantz, who said calling a game at Hinkle would be a “dream come true” in an interview with WISH-TV in January. His dream came true on March 18, when he made his Hinkle debut, calling three games, including the opening game of the first round, Virginia Tech versus Florida.

Although this is clearly an excellent opportunity for the school, it is hard to overlook the controversy surrounding the tournament being played on Butler’s campus. Over 2,000 people have flocked to Hinkle for each of the 16 games they are hosting, gathering in a way that would give Butler students a conduct violation.

It is also worth noting The Butler Collegian was not given any access to Hinkle during this historic event; instead, press passes were reserved for national media who, frankly, don’t quite understand the significance of this event to students and the local community. Although it is awesome that the site of “Hoosiers” is hosting NCAA Tournament games, it is not lost on students that the university cancelled Spring Break to limit COVID-19 spread, yet determined it was safe to host thousands of out-of-state fans. Nonetheless, Hinkle Fieldhouse and five other Indiana arenas hosted first and second round games, giving fans some of the most ridiculous upsets in tournament history.

The most impressive of the bunch is Oral Roberts, a team which boasted a 16-10 record and was the 4-seed in the eight-team Summit League tournament. They defied all expectations when they knocked out No. 2 Ohio State in overtime to become the ninth 15-seed to upset a 2-seed in the first round. They followed up their win over the Buckeyes with another improbable three-point win over Florida and became just the second 15-seed ever to advance to the Sweet 16, following in the footsteps of Florida Gulf Coast in 2013.

The other three “Cinderellas” left in the tournament, all from Power-5 conferences, feel much more in place than Oral Roberts. Although 12-seed Oregon State is in the Pac-12, their success this season has come out of nowhere. In the preseason, Oregon State was picked to finish last in the conference. The Beavers exceeded expectations by heading into the Pac-12 tournament with a .500 record, and then blew those expectations out of the water by winning the conference tournament, beating three tournament teams in a row in the process. The Beavers continued their hot-streak into the first two rounds of the NCAA tournament, beating 5-seed Tennessee and 4-seed Oklahoma State to cement their place in the Sweet 16 and as the hottest team in the country.

Calling two historic programs like Syracuse and UCLA “Cinderellas” may feel a bit odd, but both teams making the Sweet 16 of the tournament as 11-seeds is certainly surprising.

Syracuse, led by legendary coach Jim Boeheim and his sharpshooter son, Buddy, breezed through the first two rounds. Boeheim’s signature zone defense gave 6-seed San Diego State fits in the opening round, and then Buddy dropped 25 points with six three-pointers to knock off 3-seed West Virginia. Coach Boeheim taking a double-digit seeded Syracuse team to the Sweet 16 is not exactly surprising — in 2018, he led 11-seed Syracuse to the Sweet 16 and in 2016 he took the 10-seeded Orange all the way to the Final Four.

The 11-time national champion UCLA Bruins had to play an extra game to reach the Sweet 16, but that extra game may have helped them. UCLA entered the tournament on a four-game losing streak, before edging past Michigan State in overtime in the First Four. Sophomore Johnny Juzang cooked 6-seed BYU in the First Round, dropping 27 points in the upset win following his 23-point performance versus MSU. The only UCLA players to score more points in their first two tournament games? Kareem Abdul-Jabbar and Reggie Miller. Decent company.

In the Round of 32, Juzang and the Bruins made quick work of 14-seed Abilene Christian, setting up a contest with SEC champion Alabama for a place in the Elite Eight. Juzang and the Bruins are hot, so don’t be surprised if they pull another upset over the Crimson Tide and move within a game of their first Final Four since 2008.

Heading into the tournament, the selection committee made two things very clear; the Big Ten was on top of the world and the Pac-12 was far and away the worst Power-5 conference. After watching the first two rounds of the tournament, it seems as if none of the ten members of the committee stayed up to watch Pac-12 basketball this year.

For Big Ten fans, this year seemed like it could finally be the one for a Big Ten team to break through and win their first National Championship since Michigan State in 2000. The conference was lauded all year as being extremely competitive and deep, and after an exciting Big Ten tournament in Indianapolis, the conference was given nine bids to the tournament. This included four top-two seeds — No. 1 Illinois, No. 1 Michigan, No. 2 Ohio State and No. 2 Iowa — the first time any conference has ever achieved that. Despite all the hype, the Big Ten has put up an abysmal performance, even for their standards.

Only one of the nine teams, 1-seed Michigan, made it to the Sweet 16, and even the Wolverines almost fell to LSU.

Michigan State lost in the play-in game to UCLA, and Ohio State and Purdue were both embarrassed in the first round by Oral Roberts and North Texas, respectively. The six other Big Ten teams made it through the first round, highlighted by 9-seed Wisconsin defeating 8-seed North Carolina, handing UNC head coach Roy Williams his first-ever loss in the first round, where he was previously 29-0. Maryland and Rutgers, both 10-seeds, also pulled off upsets versus 7-seeds UConn and Clemson, respectively, but both failed to get through to the next round.

The real surprises came when Iowa and Illinois lost, as both teams looked completely outplayed by their lower-seeded opponents. 8-seed Loyola-Chicago and their top-ranked Kenpom defense kept Illinois in check throughout the whole game, as Cameron Krutwig, a freshman on Loyola’s Final Four team in 2018, stole the show with 19 points, 12 rebounds, five assists and four steals. Although Loyola likely should’ve been given a higher seed, it doesn’t excuse a national-title favorite in Illinois to lose before the Sweet 16. Despite a great performance from National Player of the Year hopeful Luka Garza, 2-seed Iowa got smoked by the athleticism of 7-seed Oregon, who dropped 95 points on the Hawkeyes.

It is hard to explain how a conference so hyped could put out such an awful performance. Did the polls just massively overrate the Big Ten? Did staying in the Indianapolis bubble for multiple weeks wear on the players? Could it be that the Big Ten just drew tough matchups in the tournament? Whatever the case may be, there is no denying that the Big Ten had a tournament to forget.

Despite the lack of belief in the conference from the national media, the Pac-12 have become the big winners of the tournament so far. Although it seems unlikely that any one of them will win the Big Dance, the beauty of March is that anything can happen.