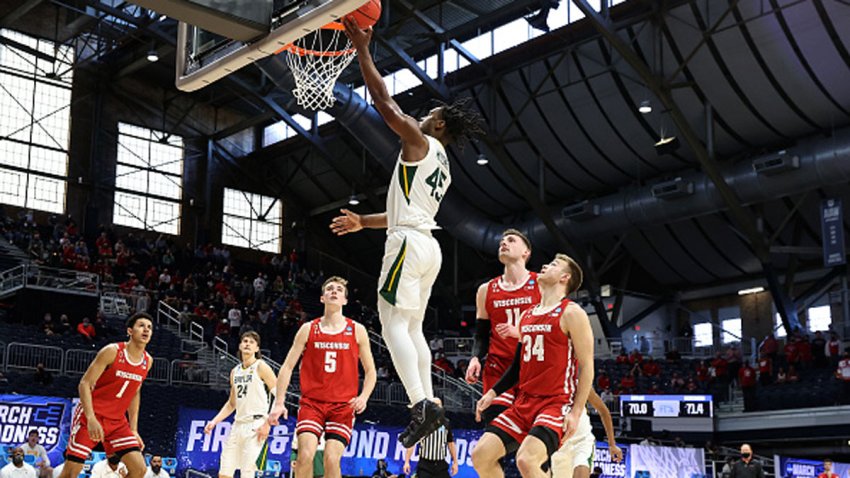 Baylor’s Davion Mitchell makes a layup in the Bears’ 76-63 win over Wisconsin in the Second Round of the 2021 NCAA Tournament. Mitchell and Baylor will play Villanova in the Sweet 16 at Hinkle Fieldhouse on Saturday. Photo by Andy Lyons/Getty Images.

After an NCAA Tournament that has been one-of-a-kind both in its location and its game outcomes, Hinkle Fieldhouse prepares to host four more Sweet 16 games between Saturday and Sunday to conclude its involvement in the Big Dance. Though much of the madness is attributed to the first and second rounds of the tournament, the second weekend boasts plenty of intriguing matchups and storylines still untold. We preview the NCAA Tournament games still to be played at Hinkle Fieldhouse.

Villanova and Baylor kick off the Saturday action from Hinkle Fieldhouse as part of the South Regional. The Wildcats return to Hinkle for the first time since Feb. 28, when they lost to Butler, 73-61. So far, Jay Wright and Villanova have experienced little trouble in the NCAA Tournament even without starting point guard Collin Gillespie, who is sidelined with a knee injury, defeating Winthrop and North Texas to get to this point. Jeremiah Robinson-Earl has been the key contributor through the first two rounds, scoring 22 and 18 points, respectively.

On the other side, Baylor returns to Hinkle after defeating Wisconsin there on Sunday, 76-63. The Bears entered the Big Dance as the No. 2 overall seed in the field and have looked the part through two games. Baylor squashed 16-seed Hartford before edging the Badgers in the second round. Five different Bears have scored in double figures at some point in the tournament, with lanky reserve Matthew Mayer leading the way with 17 points on Sunday. As a result of the unselfishness, Baylor is one of the deepest teams in the country and is expecting to stay in Indianapolis past this weekend.

One of four double-digit seeds to make the tournament, Syracuse is certainly not playing like one. The Orange have been playing some of their best basketball of the season behind their stingy 2-3 zone and hot shooting from leading scorer Buddy Boeheim. On Friday night, Syracuse sprinted out of the gates to handle 6-seed San Diego State in the Midwest Regional. The Orange continued their early-game successes with a double-digit lead over 3-seed West Virginia, before allowing the Mountaineers to come back and nearly take away the game. Buddy, son of head coach Jim Boeheim, has been electric for Syracuse through the first weekend, scoring a combined 55 points in two games. This situation is not foreign to Boeheim’s group either, as the Orange reached the Final Four in 2016 as a 10-seed.

Hot shooting from Boeheim is easier said than done against this Houston team, though, as the Cougars hold their opponents to just 29% shooting from deep, good for top ten in the country.  After Illinois lost, the second-seeded Cougars are now the highest remaining seed in the Midwest Regional and have their sights set on the Final Four. Former Indiana head coach Kelvin Sampson leads Houston into Hinkle following a nail-biting win over Rutgers, 63-60. Quentin Grimes, former 5-star prospect, has scored 40 points through the first two games. DeJon Jarreau, who suffered a hip pointer injury in the opening minute of the team’s win over Cleveland State, will be the X-factor in this game. If he can remain healthy enough to produce, Houston figures to have the advantage to move on to its first Elite Eight appearance since 1984.

When the Bluejays and Bulldogs tip off as the first game on Sunday, expect fireworks. These are two of the best offensive teams in the country this season and are led by quartets of playmakers who can hurt the opposition in a number of ways. Creighton returns to Hinkle Fieldhouse after their 72-58 win over Ohio in the Round of 32. Their most recent trip to Hinkle was a disappointing 70-66 loss on Jan. 16 at the hands of Butler. The Bluejays were without Marcus Zegarowski in that loss to the Butler Bulldogs, and will need him dearly in the matchup with these Gonzaga Bulldogs. Zegarowski has been terrific for Creighton so far in this tournament, averaging 18.5 points and five assists in two games so far.

On the other side of the court, Gonzaga looks to continue its quest to be the first undefeated national champion since the 1975-76 Indiana Hoosiers. The Bulldogs are led by Drew Timme and Corey Kispert, two of college basketball’s frontrunners for National Player of the Year. The duo has averaged nearly 40 combined points per game through the first and second rounds, but it is the depth of the Bulldogs that will be the key over Creighton. Jalen Suggs, a projected top 5 pick, as well as sharpshooter Joel Ayayi and floor general Andrew Nembhard round out the best starting five in college basketball as Mark Few and Gonzaga aim to run through Creighton en route to their first national championship in school history. If you like offensive efficiency, you will be in for a treat as Gonzaga has only failed to break the 80-point mark three times this season.

For Hinkle’s final game as a part of the 2021 NCAA Tournament, First Four participant UCLA takes on heavily favored Alabama in a chance for one of these teams to break a decade-long drought. The Bruins, one of the last teams selected into the field, are playing their best basketball of the season, having won three games over the last week to make it to this point. Mick Cronin’s squad defeated Michigan State in the play-in game, BYU and Abilene Christian over the span of five days to reach the second weekend of the tournament. Johnny Juzang and Jaime Jacquez have been a perfect 1-2 punch for the Bruins, as the duo combined for 50 points in the overtime win over Michigan State on Friday. Although UCLA may have a double-digit seed next to their name in your bracket, this team is full of blue-chip prospects and are playing like a high-major team right now. With a win, the Bruins would reach the Elite Eight for the first time since Russell Westbrook and Kevin Love took them to the Final Four in 2008.

However, UCLA won’t have an easy path. The Crimson Tide are mostly known for their dynasty of a football program, but Nate Oats has come in through two seasons and completely changed the culture of the basketball program around. Alabama features a high-powered offensive attack that considers mid-range jump shots “poison” and runs by committee, not one player stands above the rest. The Crimson Tide scored 96 points in their win over Maryland on Monday, while five different players logged double figures. Jaden Schackelford and John Petty Jr. combined for nine of Alabama’s 16 3-pointers in the win. The Crimson Tide are returning to Hinkle Fieldhouse after their opening round victory over 15-seed Iona and head coach Rick Pitino. With a win, Alabama would advance to its second-ever Elite Eight, with the last coming in 2004.

By the end of this weekend, Hinkle will have hosted 16 of the 67 NCAA Tournament games in central Indiana. The fieldhouse will see four teams punch their ticket to the Elite Eight in a March Madness that will stand alone in history. In 2021, Hinkle Fieldhouse adds a page or two.