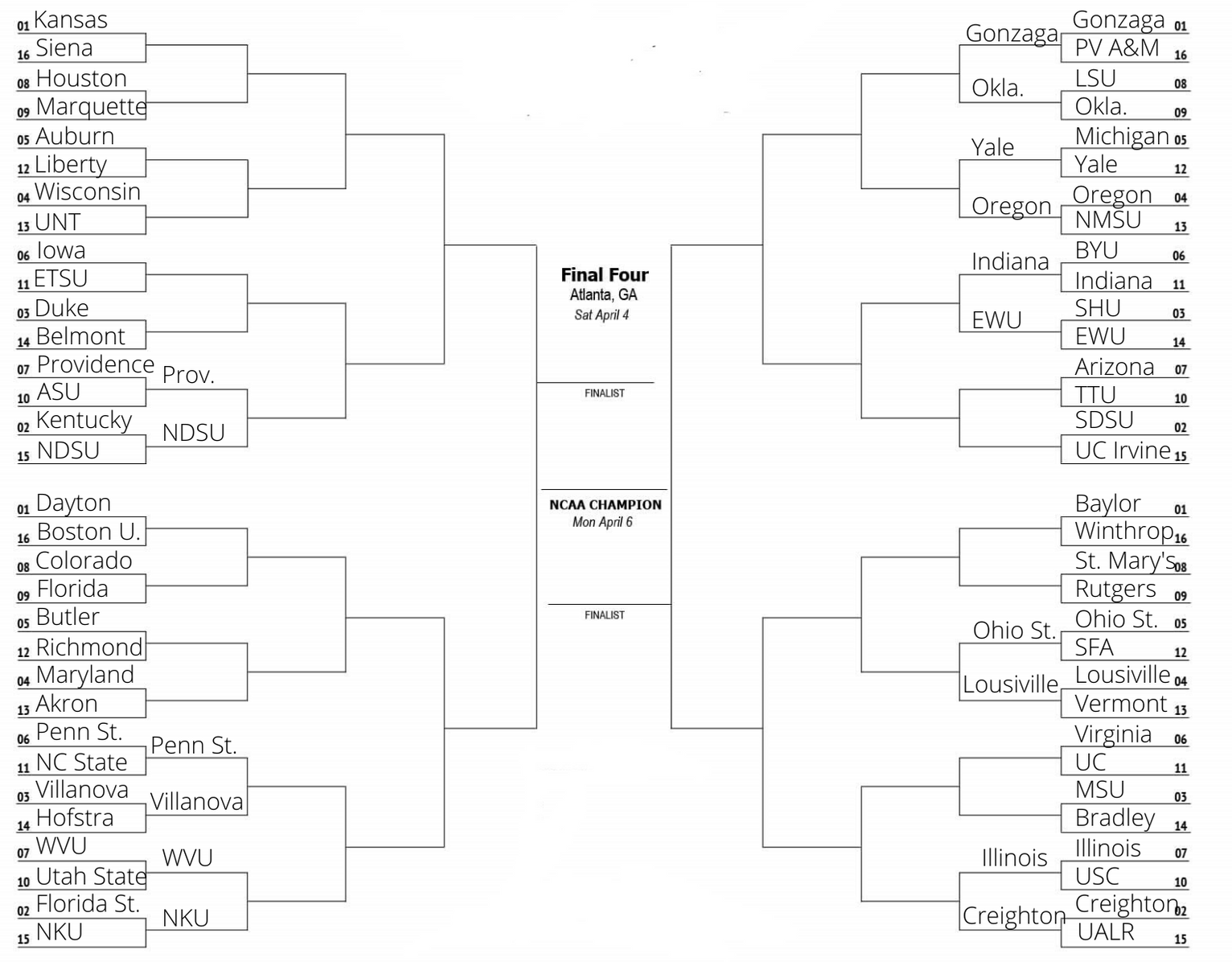 The NCAA Tournament bracket following the Collegian’s simulation of the first day of first round games. Graphic by Joshua Doering.

So, we have had our appetizer, an unassuming quartet of O.K. First Four games in Dayton. Now, though, is the moment we have all been waiting for. It’s the first of the two best days in all of sports. If you used up all of your sick days, what in the world are you doing? Buckle up, because the next 12 hours are some of the most exhilarating television known to man. Just six wins from here to crown a national champion. It’s tourney time.

I can vividly remember each of the first games on Tournament Thursday growing up. A teacher reached a level of coolness that is astronomical if they pulled this game up in the middle of class. Every bracket is perfect, and a large majority are rooting for Chris Mack and the Cardinals to keep that up this year. Tied at 36 at the half, Vermont looked to prove the America East is home to bracket bombs – see UMBC. Jordan Nwora and a double-double from Malik Williams pushed this out of reach for UVM in the second half, however. U of L advances.

A matchup of historic programs with uber-supportive alumni takes place in Albany early Thursday afternoon between Indiana and BYU. Despite the early tipoff for a west coast team, BYU came out firing with 41 points at half to lead IU by nine. However, the Hoosiers stormed back in the second half, outscoring Coach Pope’s BYU squad 45-28 for the upset. Four Hoosiers scored in double figures to earn the win with a likely matchup with Seton Hall looming ahead. It’s Indiana’s first tournament win since they last made the Big Dance four years ago.

The storyline for Creighton coming in was if sophomore guard Marcus Zegarowski was going to be available in this tournament. The Bluejays’ second leading scorer suffered a knee injury in the team’s regular season finale, casting a shadow on Creighton’s chances of going far this postseason. After testing out the knee in warmups, he was good to go and the team never looked back. CU sprinted out of the gate to lead 47-31 at the break. Little Rock had no counter for Bluejay big Denzel Mahoney, who had a game-high 20 points. Creighton advances.

First-year coach Juwan Howard leads the Michigan Wolverines into his first NCAA Tournament appearance as a head coach. Michigan’s tough tests through the Big Ten are supposed to pay dividends in March, but they have to take care of business first with a matchup with Yale out of the Ivy League. With the lead with just over two minutes remaining, Michigan could not put the ball in the hole as a big Yale three from August Mahoney put the nerds up for good. Yale outrebounded the Wolverines 42-28 – enter Taurean Prince stage left – and knocked down their free throws in the end to secure the upset and advance to the round of 32 on Saturday.

One of March’s best moments in the conference tournaments was Sam Merrill’s dagger three to win the Mountain West championship over San Diego State, likely stealing a bid for the tournament. Merrill and Utah State looked to recreate some of that magic here in the first round. Bob Huggins and West Virginia had other plans. The swarming Mountaineers forced USU to just 36% from the field and held one of the nation’s most electric scorers in check. Although not flashy, West Virginia is a dangerous team come March. They await a likely matchup with Florida State in the round of 32.

Beware the Ides of March. Rolling in fresh off of being named Big East Player of the Year, Myles Powell was looking to lead his veteran Seton Hall team to a deep run in March. Eastern Washington out of the Big Sky had other plans. The Eagles held a six-point lead at half and only extended it from there. Myles Powell ends his historic Hall career with a lackluster performance, 7-for-19 from the field, 3-for-10 from 3-point range, and Quincy McKnight was even worse: 1-for-8 from the field. The slipper fits for EWU and they’ll shift their sights to the now-favored Indiana Hoosiers for a shot at the Sweet 16.

No intro. This is what March is made of. Arizona State takes a five-point lead with a minute to go in regulation, but a couple of Nate Watson buckets and a huge AJ Reeves 3-pointer with 17 seconds to go ties us up at 79. Sun Devils run a play, Taeshon Cherry straight away three FOR THE WIN… off the mark. Head to overtime. Now it’s the Friars’ turn to blow a late lead. Up five with two minutes to go, late-game Remy Martin takes over. After Martin and Alpha Diallo trade big time buckets, a Sun Devil dunk ties us again at 94. AJ Reeves for the WIN… nope let’s do it again. A Kalif Young dunk with 1:38 proved to be the last bucket of the game as a gassed Martin couldn’t get anything to go for ASU. A late Luwane Pipkins steal sealed the win for the Friars who must quickly recover before a likely date with the Kentucky Wildcats on Saturday. Whew.

After being on the bubble late in the year, Lon Kruger’s Oklahoma Sooners ripped off big wins in the Big 12 to claim their at-large bid. Their defense came to play Thursday afternoon vs LSU, forcing the Tigers to shoot just 22% from behind the arc. While there are no stars on this Oklahoma team, they support the saying that the team is greater than the sum of its parts. Assuming no miracles happen, and Gonzaga gets past its 16-seed, the Bulldogs should not underestimate this tested Sooner squad.

Florida State head coach Leonard Hamilton is a strong candidate for National Coach of the Year after leading his Seminole squad to an ACC regular season championship. However, the March bug does not discriminate. It has no mercy. The weird thing about this game was that NKU didn’t even play particularly well, shooting just 34% from the field. The Norse somehow outrebounded a much bigger Florida State team and made more free throws than FSU attempted. Those two stats are a recipe for a stunner in March, in front of a heavy pro-FSU crowd no less. NKU advances to take on West Virginia on Saturday. Move over, Eastern Washington.

Thankfully for everyone’s sanity, no madness in this one. Villanova jumped out to an 18-point lead at halftime and barely broke a sweat. Saddiq Bey put on a show for the ‘Cats. A highlight dunk that will surely make One Shining Moment capped an impressive 27-point performance that will have NBA scouts tuning in more closely to Villanova games for the rest of the tournament. Props to Hofstra for making it to this point, but a 25-point loss is not indicative of how much of a blow out this was.

ARE YOU NOT ENTERTAINED? This is what you get when you have a single elimination tournament. Madness ensues. Kentucky is the third top three seed to fall in the last four hours, ruining brackets everywhere. Like Northern Kentucky, North Dakota State was able to ugly this game all the way up and took advantage of the opportunities they were given at the charity stripe, going an amazing 23-for-25. Shockingly, Immanuel Quickley did not have a single assist in this game and Big Blue Nation is sent home. NDSU meets a tired Providence team in the round of 32.

Whispers were rampant in the college basketball world that we’d see another top team fall, as Gonzaga led Prairie View A&M by just four at the break. A steady attack allowed the Bulldogs to run away in front of a near all-Zags crowd in the second half. Mark Few breathes easy but sets his eyes on the Oklahoma Sooners in the round of 32. They will need to cut down on the 28 free throws they allowed to the Panthers if they want to make a run in this tournament.

Kicking off the late-night window was another popular 5-12 upset pick in Stephen F. Austin. In a season where the Lumberjacks knocked off Duke on the road, the country knew that this team was capable of anything. Unfortunately for SFA, so did Chris Holtmann and Ohio State, who made sure to not overlook the Southland champs. The Buckeyes outrebounded the smaller Stephen F. Austin and converted over 50% of their field goal attempts to thwart a valiant upset effort. Ohio State advances to a juicy round of 32 meeting with Louisville. Former rivals in the Big East, Holtmann and Chris Mack meet again.

Riding the momentum from their First Four win in Dayton on Tuesday, the NC State set their sights on Big Ten surprise Penn State. What the Wolfpack didn’t expect, however, was the buzz saw they were about to run in as the Nittany Lions shot 50% from 3-point land and nearly 50% from the field too. After the conference tournaments were cancelled, Penn State’s Lamar Stevens became the program’s all-time leading scorer, leading to a standing ovation from the traveling blue and white. The cat fight for Pennsylvania awaits in the Round of 32 with Jay Wright’s Wildcats looking on.

This late-night tilt was a key battle between two of college basketball’s premier big men in USC’s Onyeka Okongwu and Illinois’ Kofi Cockburn. USC held a slight advantage early in the second half before Illinois ripped off a 15-0 run over six minutes to take a double-digit advantage. The Trojans made some pushes, but the Illini matched every punch and did not allow their lead to be in danger. Brad Underwood leads the Illini to a win in their first tournament appearance in seven years. They’ll face Creighton in the next round.

While a large portion of the viewing population went to bed, hearts content on an exciting first day full of upsets, they likely missed out on one of the games of the tournament thus far. A strong New Mexico State team entered the halftime locker room with a 39-30 lead and pushed that lead to 53-37 at the under-12 media timeout in the second half. The Ducks stormed back but were never able to take the lead until a Francis Okoro jumper with 35 seconds left gave the Ducks a 67-66 lead. NMSU would answer with a Terrell Brown floater to take back the lead. An unlikely hero emerged when Chandler Lawson kicked it out to a contested Shakur Juiston who drills the wing three with eight seconds to go! Aggies do not hesitate and take it right down the court where they kick it to Shawn Williams for the win…..off the side of the backboard. Ducks survive and advance. They’ll play an upset-minded Yale team in the round of 32.

Are you out of breath yet? Me too. But don’t fret, there will be 16 more fast-moving game recaps coming tomorrow for the rest of the field to be set for what should be an exciting round of 32. Stay tuned for the rest of the tournament. This is modified madness.