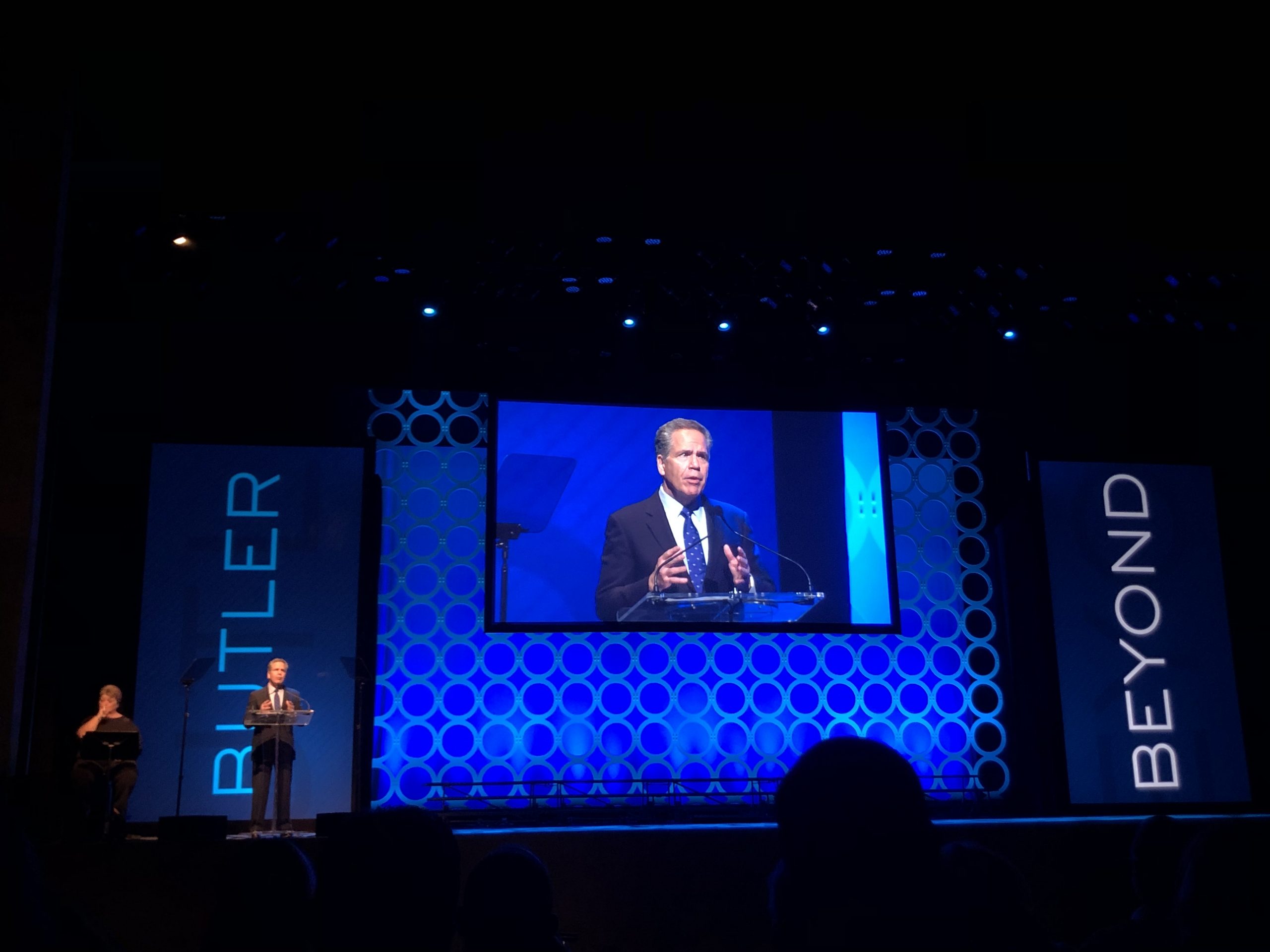 President Danko speaks at the Butler Beyond launch event in October 2019. Butler Beyond has raised $32 million towards scholarships so far. Collegian File Photo.

On Feb. 3, Butler announced that $32 million of the $55 million goal has been raised for student scholarships in the Butler Beyond campaign. The campaign is set to end on May 31, 2022, leaving two more years to reach the goal.

Jonathan Purvis, vice president of advancement, said he believes the goal will be exceeded.

“It is just absolutely the most important part of this campaign,” Purvis said. “That’s because we’ve got to make this education that we provide as accessible as possible to students.”

Butler provided $77 million this academic year for student scholarships. Most of that money comes out of Butler’s annual budget, not from donors.

A third of Butler’s budget is spent on scholarships annually, Purvis said.

The $32 million is a combination of endowed and annual gifts. Endowed gifts are sums donated at one time, but the money is released in small percentages each year, allowing that money to benefit students as long as Butler exists. Annual gifts allow donors to provide small amounts of money each year for a certain duration of time, with all of the money provided going towards scholarship money.

Donors decide what the qualifications for their scholarships are, but Butler encourages them to make the requirements as broad as possible.

This enables the university to provide money to the students who need it the most on any given year, Purvis said. Butler is committed to increasing its scholarship opportunities because of the quality of education that Butler provides and the importance of expanding accessibility.

“We feel great about the quality of education we provide and how we prepare students for the future,” Purvis said. “Part of being able to extend that quality is cost, because it costs money to do that. So then again, that’s why scholarship is important because if it takes ‘x’ amount of money to provide that kind of education, that’s more than we want to have to charge our students fully in tuition.”

Tuition for Fall 2020 and Spring 2021 is set to be about $21,205 per semester for a full time student. This increased by 2.5% from Fall 2019 and Spring 2020.  This is the smallest increase in two decades and the university says the increase is due to investment in higher quality faculty and educational programs.

Talia Slowinski, a sophomore marketing major, is a Butler merit scholarship recipient. She mentioned extra fees, tuition increases and expensive meal plans as extra barriers to students affording a Butler education. Merit scholarships also cannot be applied to study abroad expenses, which can be a hindrance to students.

Slowinski said Butler’s education is so valuable because of the connections it provides to its students.

“I’ve been in Lacy for a year and a half and I recently got an internship through a connection I made here,” Slowinski said. “I don’t know that I would’ve gotten that internship if I was at another school. Like at a Big Ten school, where there are 60,000 kids, they don’t have time to worry about each individual student getting opportunities.”

Several Butler students are recipients of the Lilly Endowment Scholarship, which provides selected high schoolers in each county in Indiana with full tuition at an in-state college or university.

“I just really hope that kids in similar situations or any kids who want to go to Butler University are able to, since it is on the higher end of tuition and it is a more expensive school,” Roberts said. “I just hope that kids have similar opportunities so that they can enjoy their experience here and not be as stressed.”

Alejandra Escobedo, a junior Spanish and psychology double major, is also a Lilly Scholar. Escobedo is a Community Assistant in Ross Hall and sees first hand the financial burden on students and how it affects their education.

Both Escobedo and Roberts said that their decision to attend Butler was largely impacted by the fact that their tuition was covered.

Escobedo said that she would not have even looked at Butler had it not been for the scholarship money she had available to her.

Roberts and Escobedo also recognized the diverse range of opportunities at Butler as a component of its high quality education. Both appreciated the many options of study and extracurricular pursuits at Butler, and the extent to which the university encourages its students to expand their interests while attending school.

Purvis identified increasing scholarship funds as one of Butler’s biggest priorities, even outside of the Butler Beyond campaign.

“That’s part of it too, again, thinking about access broadly: that any student regardless of their life circumstance, that wants to come to Butler that thinks this is a place for them, we want to make sure that cost isn’t a factor to the extent possible,” Purvis said. “We’re not there yet, that’s still an aspirational goal we have, but extending greater scholarship support we know is a piece of that formula, so that cost isn’t a barrier is our goal.”

Butler Beyond began with a quiet phase, during which the university focused on getting money from currently engaged donors. The campaign started its public phase with the Butler Beyond event in October. The university hopes to raise $250 million in total, prioritizing scholarship funds and then working on development of academic programs.