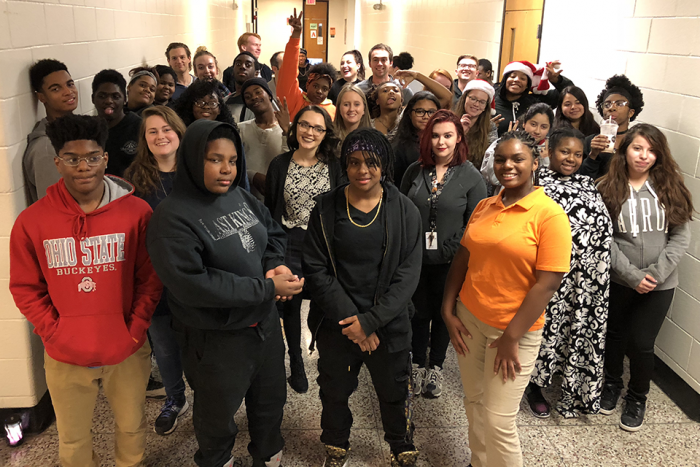 Broad Ripple High School opened in 1886 with seven students. In a few weeks, the high school will officially close, forcing 502 students to new high schools. And the Butler students in the Writing in the Schools after-school program will move to Shortridge High School next semester.

WITS is a class that sends Butler students to a local public high school to mentor children with writing. English professors Chris Speckman and Susan Sutherlin started WITS when Speckman was in graduate school in 2012. Sutherlin suggested Butler students teach creative writing after school at an Indianapolis Public School.

“As soon as she mentioned that, I was like, ‘Yes, I totally want to do that,’” Speckman said.

He was a graduate assistant for the program. But after graduating in 2013, he took over the program. From 3 p.m. to 5 p.m., 35 to 45 students would sit at black marble tables and work on their short stories, poems, plays, raps or even dance routines. This year, it has been closer to 15-30 because enrollment has dropped.

“The goal [of WITS] has always been, first and foremost, to serve,” Speckman said, “and to use the resources that Butler has to serve a need to an underserved population…[IPS schools] are definitely not operating with the same kind of resources as suburban school districts — Carmel, Fishers.”

The program started in 2011 at Shortridge and moved to BRHS, a magnet school, in fall of 2015. Speckman said that because BRHS and Shortridge were almost in the Butler Bubble, it was a great opportunity for Butler students as well.

“The secondary goal was to allow Butler students this opportunity to break out of the Bubble, have another service opportunity, and get to know the Indianapolis community and become better citizens,” Speckman said. “To understand that when you’re an adult, you’re going to be voting in school board elections. And you should have some sense of what policy means and why it’s important.”

Last September, the IPS school board announced that three IPS high schools and one middle school would close its doors at the end of the 2017-18 school year because of declining enrollment. BRHS is currently operating at a quarter of its capacity. Members of the board voted 5-2 to close Arlington High School, Northwest High School and BRHS. In a separate vote, they unanimously voted to close John Marshall Middle School. Only four high schools remain: Arsenal Tech, Crispus Attucks, George Washington and Shortridge.

Sophomore BRHS student Elizabeth Maritinez said that she hoped when she enrolled at BRHS last year that she would get to graduate from the school. She started creative writing for the first time at WITS last year.

“Butler Writers is fun,” Maritinez said. “You get to meet new people. I’m really sad [BRHS] is going to close, because my sister graduated from here.”

She writes about her past mostly. Maritinez said writing changed her life; for years, she had been severely depressed.

“For me, it’s kind of personal,” Maritinez said. “I was suicidal and tried to [self-harm] all the time.”

BRHS has a majority black and Hispanic in population, and the percentage of free and reduced lunches was calculated to be about 71 percent in 2015, according to the Department of Education. Speckman said that for a lot of Butler students, the experience of WITS may be humbling.

“I think it’s easy for people who are more privileged to look at these marginalized populations and see them as ‘others,’ and to further marginalize them,” Speckman said. “When you go to those schools, you see that [BRHS students] have the same passions for reading and writing that you have. They love the same TV shows that you love. They will talk to you about the same basketball teams, they will wear the same sneakers. [This program] opens people’s eyes up to the fact that these kids just want to learn, to succeed, and they want to write and express themselves.”

Third-year Master in Fine Arts graduate student Greg O’Neil took the class as an Indianapolis Community Requirement in fall of 2015. He fell in love with the course and became a graduate assistant the following semester. He helps make sandwiches, talks to kids, run workshops and makes sure everything is “going smoothly,” he said, as things are known to get a little chaotic when energetic teenagers are involved.

“I do it because I like spending time with the kids at the school so much,” O’Neill said. “I find it incredibly challenging, rewarding, fun, funny. [WITS] is sold as a service course, but I don’t know anyone who leaves it feeling like it was not worth their time. But for me, it’s probably the most rewarding thing I’ve done since I became an MFA student.”

Freshman BRHS student Emajyn-Akai Scott has been attending WITS since the first semester it started at Broad Ripple. She has been doing WITS for three years.

Since she has been in the program, her writing has changed. Her mentality is different. She feels she can write about a broader range of emotions. She likes writing about school, her feelings and her “issues.” A big theme in her writing is relationships.

Her favorite part about WITS is being able to experience other kids’ stories, poems, and artwork. One of her favorite mentors is Samantha Tkac, a graduate MFA student.

Speckman is hopeful that he will see some familiar faces next fall. Scott and Maritinez said they will go to WITS at Shortridge. Scott is looking forward to seeing what Shortridge students do in the WITS program.

“They would probably be more exposed to letting out their feelings and writing them down,” Scott said. “They could probably write some really great work… I’m really excited to see what they have to offer.”

Scott had a tip for Speckman and mentors next year:

“Instead of peanut butter and jelly every Tuesday and Thursday, we should all go out and get McDonald’s,” Scott said. “Unless someone don’t have no money, then someone would probably help you out, because we’re all loving students.”