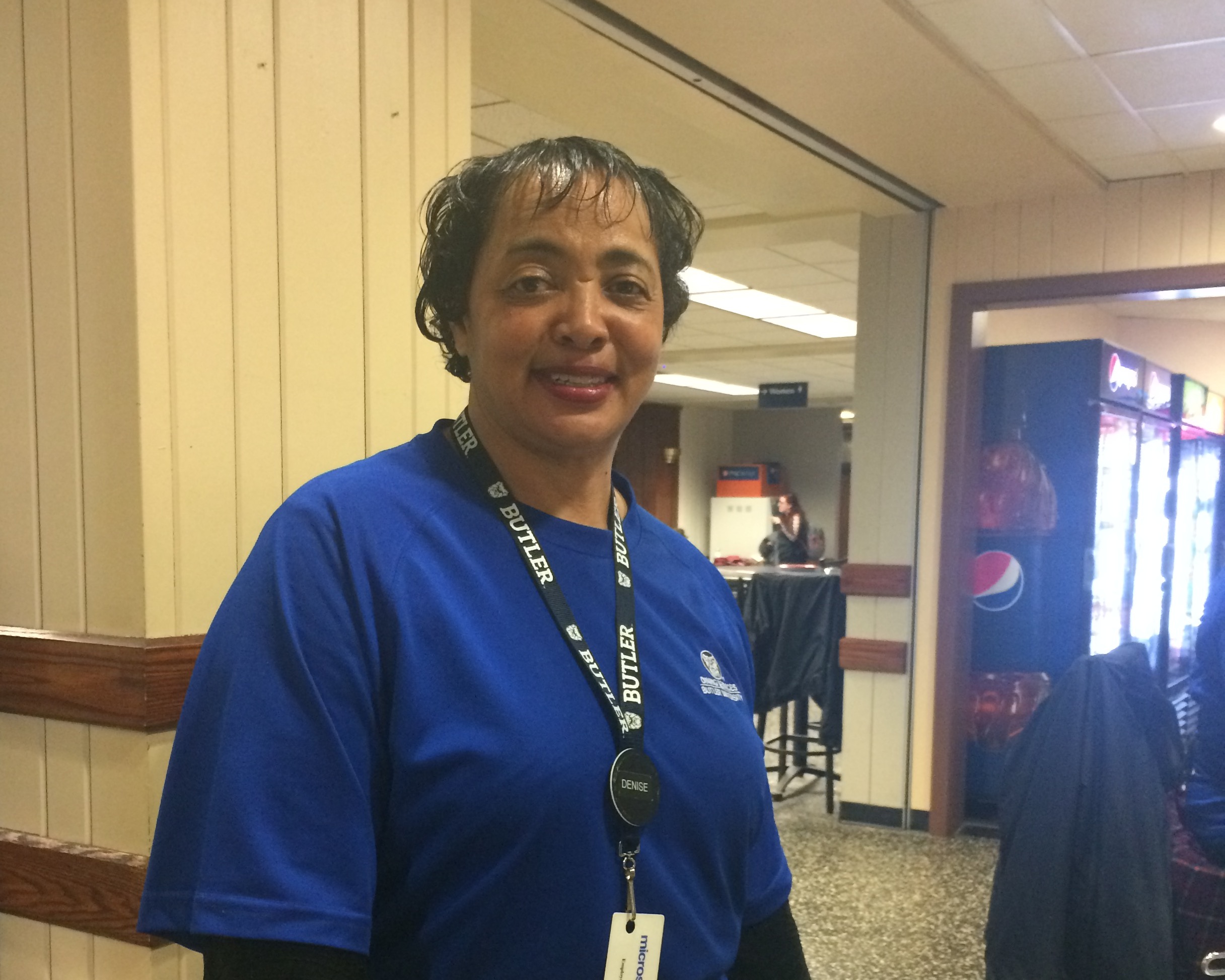 Denise Kimbrough is a frequent friendly-face in C-Club. Photo by Chloe Sell.

Speak to any senior about Miss Denise from C-Club, and they will know immediately who you are talking about. But for first-year and non-Butler students who are not as familiar, Denise Kimbrough has been an Aramark employee at Butler University for seven years. Kimbrough works as a cashier at Atherton Union’s C-Club.

Kimbrough has had some trials, such as becoming pregnant at 19 and losing several family members, but she said she is so strong-willed because of her father.

Her father was from Pulaski, Tennessee. He was in sixth grade when he dropped out of school and worked for what is now called the Navistar International manufacturing company. He worked there for more than 10 years before he decided he wanted his own business, a trash collecting service.

“He only had a sixth grade education,” Kimbrough said. “He could read, he could write. And for him to come here to start a successful business? I applaud him. I really do. When I was younger, I didn’t understand. But it was a blessing, because a lot of people back in the south in the day…didn’t have much. But for him to come from nothing and be successful in his business, and have all his family down there, it was good.”

When her brother and father died around the same time, there was no one to help Kimbrough with the family business, so she tried for a year or so to manage it by herself. But it became too difficult. She lived close to Butler at the time and had the idea to work on campus.

“I used to live right up the street,” Kimbrough said, “And I said, ‘You know what, I just need a little job, not any titles.’”

But that little job has a big impact on a lot of people. Kimbrough’s fellow co-worker Farrah Smith has known her for five years and said they are close.

“She’s my mom, she’s my friend, she’s my confidant,” Smith said. “She’s just really sweet. She treats people No. 1, with the most respect. She treats them kind, nice, and she treats everyone like they are her own daughter or son.”

“I think she really takes her time to support you and get to know you a little better,” Wallace said. “She offers words of encouragement. She’ll always tell you she wants the best for you.”

When Kimbrough was 19 and about to go to college on a scholarship, one of her brothers died in a motorcycle accident. This was a month before she found out she was pregnant. Her parents said they would take care of the baby. The father of her child said he wanted nothing to do with his kid.

“I chose not to go to college because I just felt he wouldn’t be in [my son’s] life,” Kimbrough said. “When you become a single mother, you sacrifice. But I look back, back in the day, [and wonder] ‘Why didn’t I just go?’ But it’s OK.”

She never reconciled with her son’s father. Instead, she has a partner, one who has asked her to marry him several times. She said that she has always refused him because she has seen her brother’s bad marriage first-hand and didn’t want her marriage to be like that.

“If push comes to shove,” Kimbrough said, “if we ever get to talking like that again, I might just say, ‘Why don’t we just get married.’ See what he say… I’m approaching 58 and I’ve done and seen and doing now. That’s not really a factor right now. I’ve done it by myself this long.”

Kimbrough will be 58 this year, and that number is just fine with her.

“I feel good. As long as I can get up and do what I have to do,” Kimbrough said. “Age don’t bother me. Age is just a number.”

Butler University is a primarily white institution, but many of the Atherton and C-Club employees are black, as is Kimbrough. When asked how she felt about this, she said, “To be honest, I don’t see color, because…you cut yourself and I cut myself and our blood is red.”

She said a few black students have told her it would be their last year at Butler because they thought the campus was prejudiced. These students look to Kimbrough for advice.

“I say to people, ‘Don’t give up, see what is going to happen,’” Kimbrough said. “You see a lot of black people, white people getting along, dating, they having kids. Some people don’t like it and they can’t accept it.”

She used to experience racism a few years ago. The first year she was at Butler, some students did not want to touch her hand as she gave them back their change. A few white men in a truck on Sunset Avenue called her the n-word as they were driving by. To that, she waved and said hello.

“When people call you out of your name, you know, you just smile and say ‘What are you?’” Kimbrough said.

“A lot of [black] people retaliate,” she said in response to racism, but “it don’t need to be all that, because when you do that, people get hurt, they get killed.”

Wallace said Kimbrough is very supportive of Butler students, especially those of color. Wallace is black. She compared Kimbrough to a cheerleader, saying she knew she was always rooting for her, which goes above and beyond the role of a cashier. The fact that there is a racial disparity between the Aramark workers and the majority of the students only makes Kimbrough’s happy attitude more important and unique, Wallace said.

“I think that’s what makes her, and all the other workers there, extra special too, because they’re there supporting this majority white population and they can always keep that smile on their faces,” Wallace said. “It really sucks to be at a school that is majority white. I think for students of color, it’s special to see [black workers] there.”

Kimbrough said the best part about her job is interacting with students.

“I can have a bad day and you’d never know it and then the kids come and [say] ‘Hey, Miss Denise,’ and I make their day just as well as they make mine,” Kimbrough said. “They’ll come in and they are so respectful. They’ll say, ‘Good morning, Miss Denise,’ even if they don’t come in and buy anything. Sometimes I can be in a dull, gray thing, and they’ll say that and it lifts me up.”