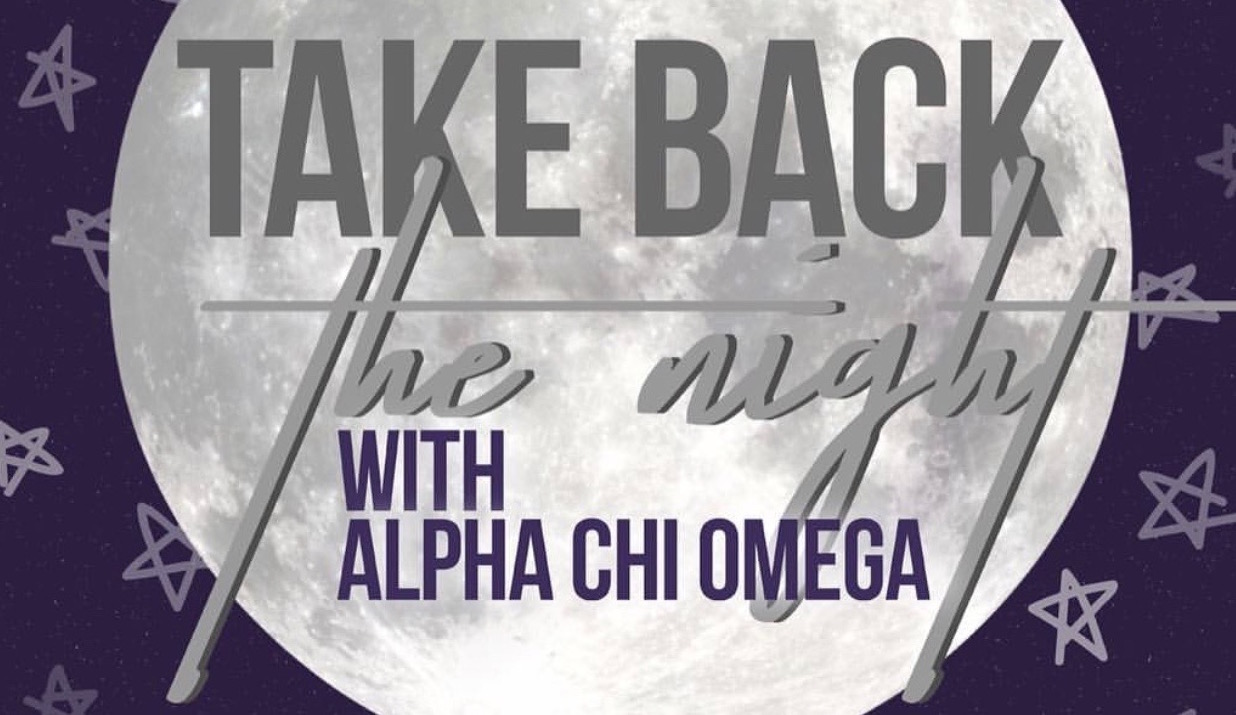 On April 6, Butler students are invited to attend Take Back the Night, an event aimed at ending sexual violence, hosted by both Alpha Chi Omega and the Office of Health Education and Outreach Programs. The event is held during the first week of April, which has been designated Sexual Assault Awareness Month. This is the first year that Butler will host the event.

Beginning in the 1970s, Take Back the Night (TBTN) was the earliest international protest against sexual violence and violence against women, with a mission to create safe communities and raise awareness. Now, TBTN events have been documented in more than 36 countries, more than 800 communities and have reached more than 30 million people.

Julia Bartusek, vice president of philanthropy for Alpha Chi Omega, is bringing the event to Butler’s campus. Bartusek, a sophomore double majoring in peace and conflict studies and human communication and organizational leadership, spoke of her decision to include Take Back the Night as Alpha Chi Omega’s new spring philanthropy event.

“Originally in the spring, we would do Walk a Mile in Her Shoes which is a partnership that Alpha Chi Omega has nationally,” Bartusek said.

She went on to explain that Walk a Mile in Her Shoes had been receiving some pushback for the last few years, mainly due to issues regarding gender inclusivity and the assumption that wearing heels made the participants empathetic with a survivor of sexual violence. After taking over the position in January, Bartusek knew she wanted to make some changes.

“I knew that a new event was something I wanted to do going into position, and after looking at similar events I came across Take Back the Night,” Bartusek said. “Alpha Chi headquarters recommended the event to us as well, as it was on a list of things that other chapters had done.”

Bartusek also realized that another organization was planning the same event on campus, within the Office of Health Education. Therefore the sorority and the members from Health Education have worked together in order to make the event happen.

“While it is it’s own organization, it’s more like a movement,” Bartusek said. “I was in contact with the founder and was able to make the event my own. Their organization is so open to ideas, which I enjoyed. I think it’ll be something different, and something that campus should be excited about.”

The event will take place in the Reilly Room, starting at 6 p.m. From 6 to 7 p.m., there will be various activities such as banner painting, poster making, music, a photo booth and the chance to win prizes through an equal opportunity drawing.

The drawing will include a purple purse, retailing at about $300, as a part of the Allstate Foundation Purple Purse campaign. This is the longest-running national campaign focused on ending domestic violence through financial empowerment services for survivors.

During this time there will be several resource tables from local organizations such as Butler Victim Advocates, The Julian Center, Indiana Coalition to End Sexual Assault, Butler Counseling Services, Center for Faith and Vocation and Stand Tall/It’s On Us.

From 7:00 to 7:30 p.m., the program will host a speaker from the Julian Center and a performance by Freshly Brewed. Winners of the drawing will also be announced. Following this will be the campus advocacy walk.

Bartusek went on to emphasize the importance that events surrounding the education and raising awareness of sexual violence have, particularly on college campuses. She also encourages students to take more action regarding the eradication of these issues.

Since Bartusek said that sexual assault affects 1 in 3 women and 1 in 7 men, and is especially relevant on college campuses, she thinks it is important for college students to get involved in making a difference.

“Honestly, one of the biggest reasons I chose Alpha Chi Omega was because I am very passionate about their philanthropy,” Mann said. “Domestic Violence Awareness is a topic that is hard to talk about but needs to be because of the immense impact it plays in a lot of college student’s lives. As Alpha Chis, we want to educate others on the differences between healthy and unhealthy relationships while offering support to those who need it.”

Take Back the Night derives its name from the idea of reinstating empowerment around a scary or stressful time in one’s life, nighttime being symbolic of that darkness and fear.

Morgan Mikowski, a sophomore double major in marketing and entrepreneurship and innovation, was also not aware of Take Back the Night prior to this semester, but acknowledges that it aligns significantly with the values of Alpha Chi Omega. Mikowski also talked about the impact that Alpha Chi’s philanthropy has had for Butler and the surrounding area.

“I think that between our three main philanthropy events, we have been able to impact not just the Butler community, but the Indianapolis community as well,” Mikowski said. “Since we work side by side with organizations such as the Julian Center and Wheeler Mission, we have seen first-hand the impact these events have on the community as a whole.”

Purchasing a ticket enables entrance into the Reilly Room, along with access to pizza from Goodfellas and a cupcake from Gigi’s Cupcakes. According to Bartusek, 90 percent of the sales will be donated to the Julian Center and 10 percent to the Alpha Chi Omega Foundation.

The Julian Center, located in the downtown Indianapolis area, is the largest organization supporting victims of domestic violence, sexual assault and other life crises in Indiana. Furthermore, Alpha Chi Omega is being sponsored by the Allstate Foundation for the event, where they will match all donations and money raised.

Tickets for the event are $5 and will be sold at Starbucks throughout the week, as well as at the door on the night of the event.