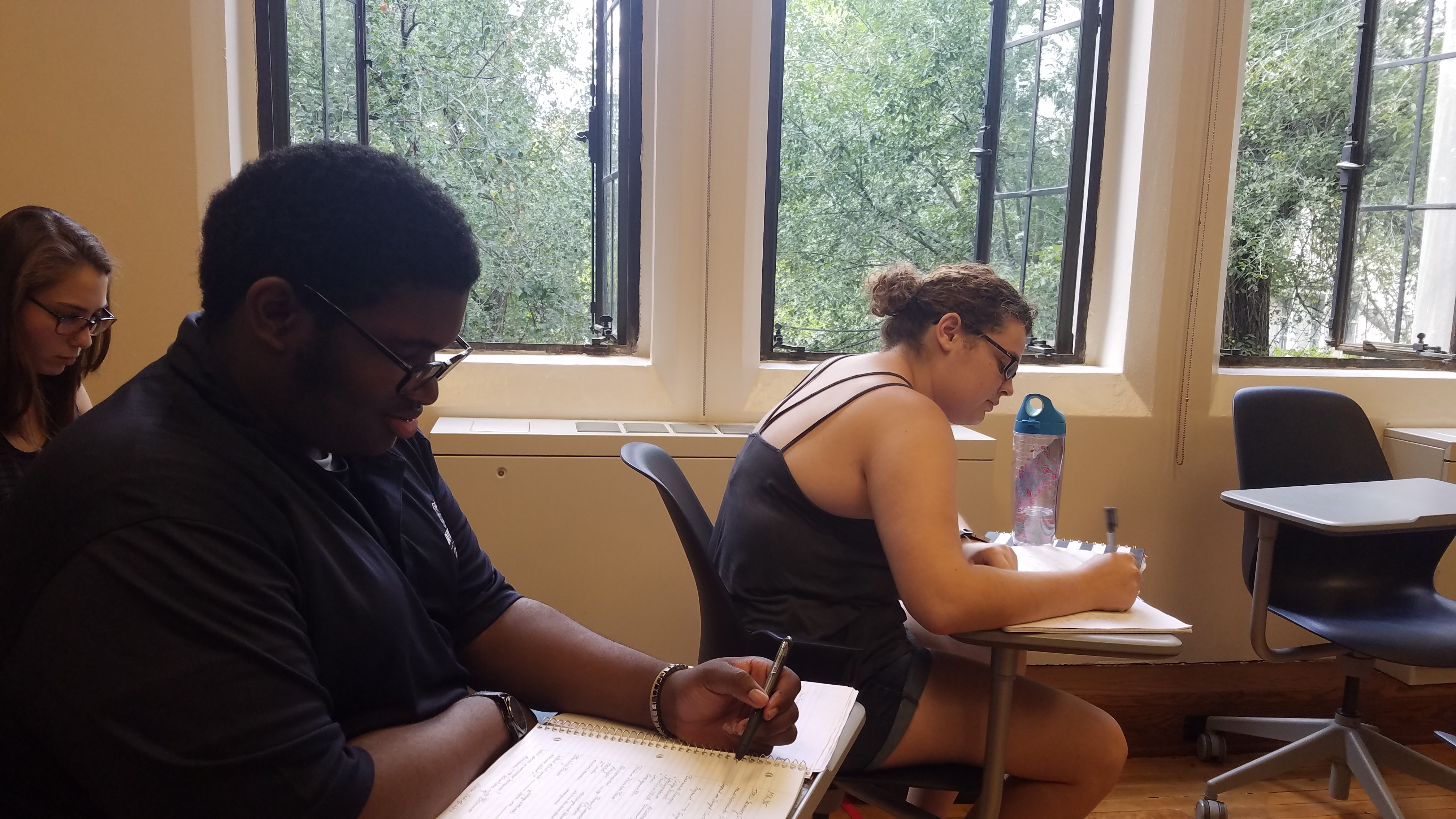 Students in a Jordan Hall classroom take notes with the windows open. Photo by Zach Bellavia.

Irene van Driel, strategic communications visiting instructor, walked into her classroom with quizzes in hand, but said she instantly “felt a stream of hot air.”

At the moment, van Driel did not know there was a cooling issue with all of Jordan Hall. When her students could not find fans from other classrooms to use, she decided to move the class two rooms down, saying students cannot take a quiz when sweat is dripping on their papers. The new room was not much of an improvement, but van Driel said for whatever reason, it was more bearable. Still, it was difficult to pay attention.

“They were trying really hard, but I could see more and more people — also people that really pay a lot of attention — were just tired,” van Driel said. “Literally, their heads were nodding off a little bit. Nothing bad about the students — they tried, but I really think it was the heat. I even had trouble with it.”

The next day, Sept. 19, students and faculty members received an email from Rich Michal, associate vice president of facilities.

The email explained that Butler University is having several issues with the central chilled water plant, resulting in warmer temperatures in all of the academic buildings, Lilly Hall, Clowes Memorial Hall, Schrott Center and Irwin Library.

Michal said three things happened to the cooling system that caused its lack of efficiency.

The gearbox, which controls the motor for one of the three fans, went out, causing the system to lose almost a third of its capacity. Then, they found that dust from the new residence hall construction site settled into the system. When the unseasonably warm temperatures hit too, the system did not have the ability to cool all the buildings.

Michal said they first tried to see if they could bypass the gearbox, because the campus still has three functional chillers. When they could not do that, they tried to clear out the construction dust. Unfortunately, that caused the dust to clog the nozzles of the chilled water plant.

“It was all-hands on deck,” Michal said. “We manually removed all those nozzles and cleaned them out. So the good news is, we got it all cleared out [Sept. 21], and the system’s running pretty well.”

First-year dance major Kassi Tiedjens said dance classes are much worse than her regular classes because there are a lot of moving bodies in a small area.

Austin Long and Becca Orr, both pharmacy fifth year students, said the more bodies in one space, like the Gallahue lecture halls, the worse it is.

“It makes studying really hard because I can’t go to the academic buildings,” Long said, who likes to study in Jordan.

Some professors, like van Driel, have tried to make best of the situation.

Junior strategic communication Marais Davis said her professor even turned off the lights during class to see if it will make the temperature cooler. She said she did not think it helped.

The rented tower will stay until Butler can turn on the heat for cooler temperatures. Once the heat can turn on, Michal said the university can move forward with their plan to replace the whole system. The system right now is old and will be unable to supply cooling to the new school of business and sciences renovations.

“The more critical piece from a timeline standpoint is how soon that it cools off that we can start that work,” Michal said. “We got until it starts to warm up — March, maybe April — to get that chilled water system built and completed. That’s what I’m more worried about. Once we get through this hot spell, then we’re going to be focused on that so next spring, we won’t have these issues.”