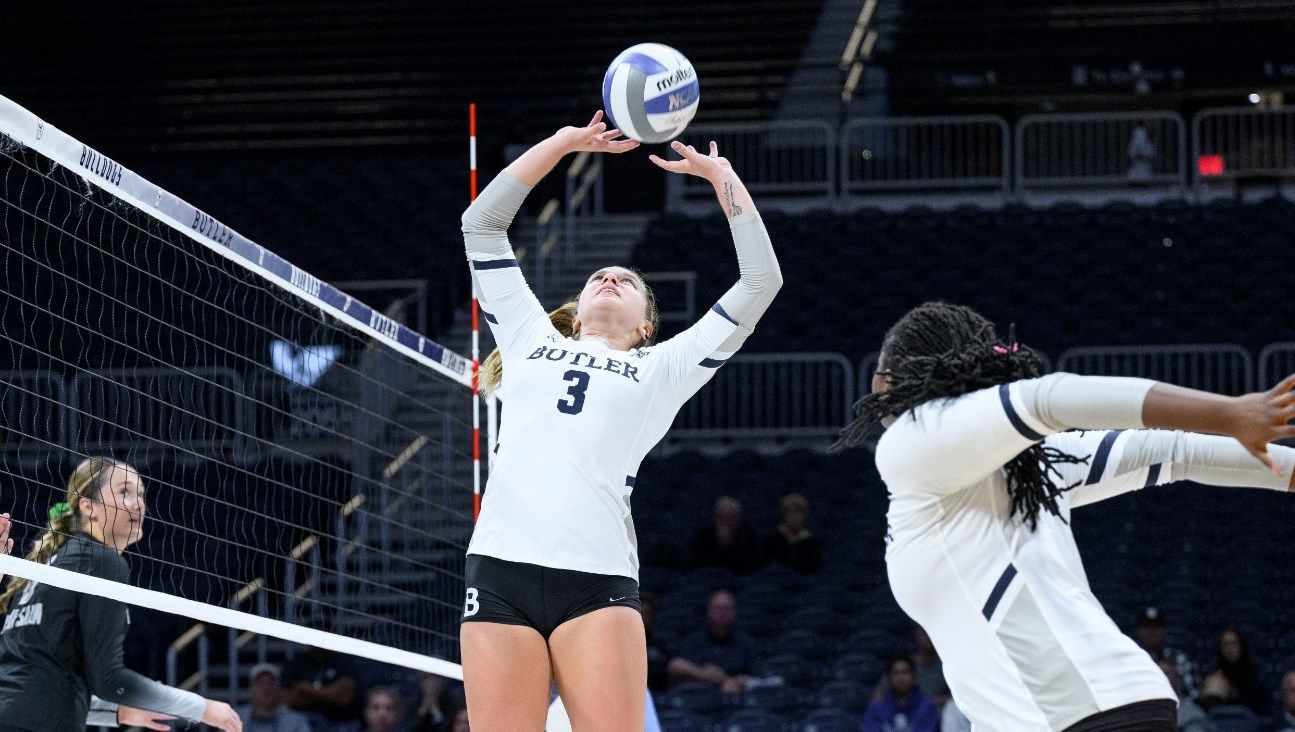 First-year setter Cora Tayor looks to dish out a kill against Georgetown on Oct. 7. Photo courtesy of Zach Bolinger from Butler Athletics.

The women’s volleyball team is nearing the end of the regular season and looking to make a push to solidify their spot in the Big East Tournament.

Over the weekend, the Bulldogs met with Villanova and Georgetown to close out their away  games. It was their second weekend of back-to-back games with the Wildcats on Nov. 12 and then the Hoyas on Nov. 13.

On Saturday evening, Villanova opened the match strong with a 6-0 lead forcing Butler to climb their way back. After multiple runs and trading points, the Bulldogs tied the set at 17-17 off a Wildcat error. Following the tie, junior Amina Shackelford served an ace to give Butler their first lead of the set at 18-17. Villanova would tie it at 18-18 off a kill, but Butler’s late set surge proved to be too much for the Wildcats. Senior Marisa Guisti laid down the kill to give the Bulldogs a 25-21 set win. Senior Megan Sheridan led Butler with five kills in the set.

The second set featured 5-0 runs by both teams to start the set after Butler’s 1-0 lead. After the Bulldog’s 8-6 advantage, the Wildcats went on a 6-1 run to lead 12-9. Butler went on a 3-0 run sparked by a Sheridan kill and graduate student Maddie Renn’s ace to tie the set at 12-12. From that point, the rest of the set was a tight contest until Butler made some breathing room at 23-21. Despite Villanova’s effort to tie the set, two late Wildcat errors would give the Bulldogs an early 2-0 set lead with a 25-22 set win.

Coming out of the break, Butler dug themselves into a hole at 15-6 in the third set. The Bulldogs kept climbing their way back and got within seven at 20-13, but unfortunately would not be able to complete the comeback and dropped the set 25-19. Six Bulldogs contributed to the Butler offense in the set.

Villanova opened the fourth set with an early 6-1 lead. Butler found themselves within three at 13-10, but a 4-0 Wildcat run bumped the Bulldog’s deficit to seven at 17-10. Butler kept chipping away in the set keeping Villanova from running the score, but their effort was not enough as they fell 25-17 resulting in a deciding fifth set. Sophomore Destiny Cherry and first-year Cora Taylor combined for three blocks in the set.

In the final set to 15, the teams were tied at the halfway point at 7-7. Villanova went on a 3-0 run to take a 10-7 advantage. Butler was not able to go on a run of their own, but climbed their way back to within one at 14-13. Villanova’s sophomore Indiana native, Rose Crist, put down the set to secure the Wildcat’s 2-0 comeback.

The Bulldogs looked to bounce back against Georgetown Sunday afternoon in Washington D.C.

In the opening set, Butler jumped out to an early 5-1 lead backed by two kills from sophomore Mariah Grunze, one solo block by Guisti and one combo-block by Grunze and Guisti. The Bulldogs never trailed the rest of the set with the largest lead coming at 20-11. Shackelford and Grunze combined for a block to end the set 25-16. Shackelford connected for six kills leading the Butler offense.

The second set paralleled the first with Butler jumping out to an early 9-4 lead. The Bulldogs held onto their lead despite the Hoyas’ late set comeback at 21-20. Taylor recorded the set point off a kill from senior Jaymeson Kinley to take a 2-0 match lead into the break. Sheridan and Grunze both laid down six kills to help propel the offense.

Hoping to avoid deja vu, Butler went on a 6-0 run featuring two kills from Grunze, two aces from Taylor and two blocks from the Shackelford and Guisti combination. The Bulldogs let the Hoyas have one point before taking a commanding 11-1 lead in the set. Butler continued to put their foot on the gas and took the set 25-16 completing a sweep of the Hoyas.

Grunze, Shackelford and Sheridan all ended the day with 13 kills, and Kinley recorded 20 digs to lead the defense.

With Sunday’s win, the Bulldogs put themselves in position to secure a spot in the Big East Tournament with two games remaining. Butler will close out the regular season at Hinkle Fieldhouse against Providence on Nov. 18 and UConn on Nov. 20.