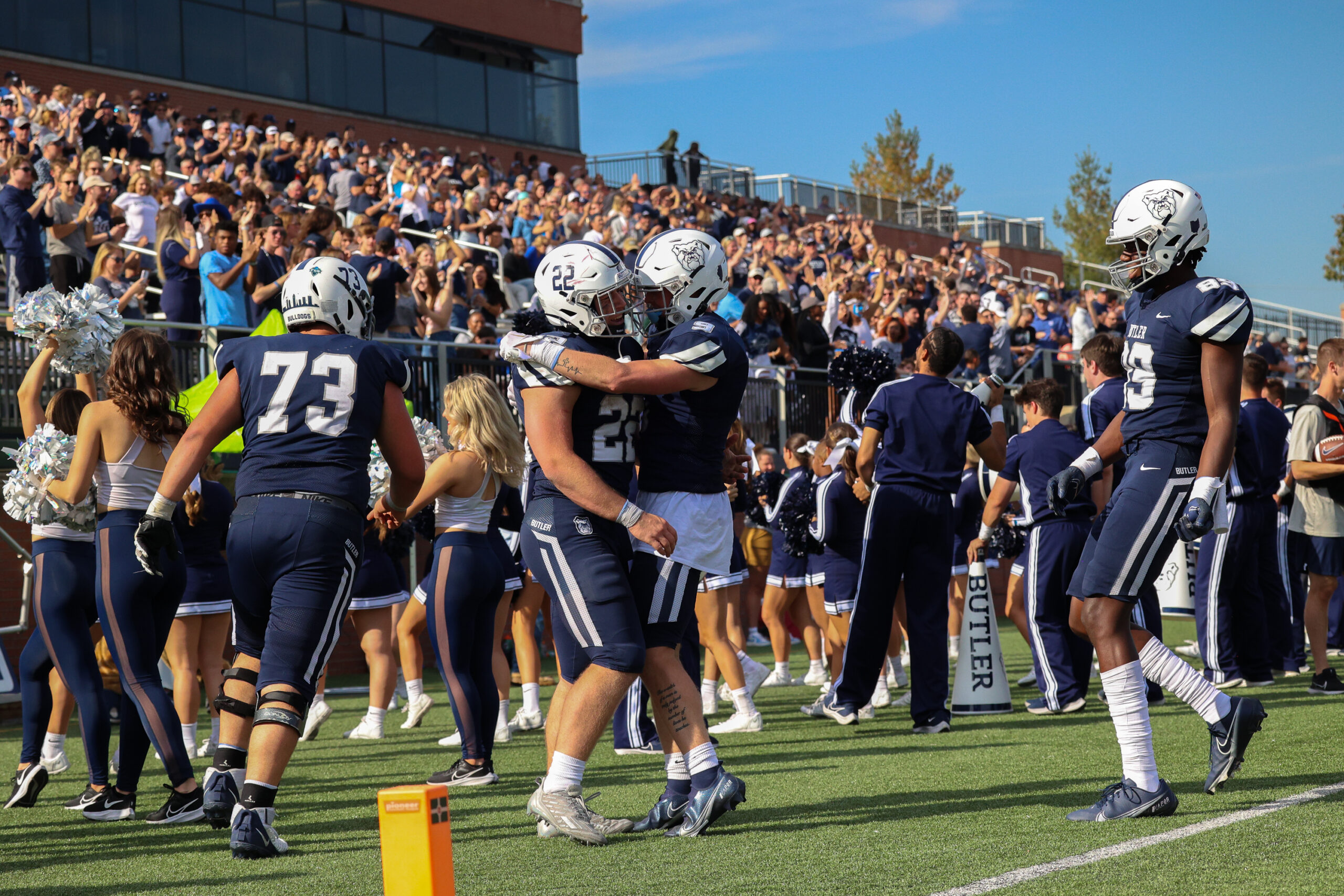 The men’s soccer team lost a road matchup with the Creighton Bluejays 4-2 on Wednesday night. Butler managed to grab an early lead thanks to first-year Joost de Schutter’s first goal of the season via penalty kick. While the Bulldogs held this lead for the majority of the first half, Creighton’s Jackson Castro scored the equalizer in the 36th minute and took the lead in the 57th minute from an Owen O’Malley goal. Even though the Bulldogs were able to tie the game again from a Jack Streberger goal midway through the second half, Creighton maintained their momentum for the rest of the match, outscoring Butler 2-0. With this loss, the Dawgs fell to fourth in the Big East standings with a 3-3-1 conference record and an 8-5-1 record overall.

Members of the Butler women’s tennis team traveled to the University of Tennessee-Knoxville to compete in the ITA Ohio Valley Regionals. Out of the four Bulldogs who made the trip, two advanced past the first round. Making it all the way to the round of 64 was junior Natalie Boesing who was able to beat her first two opponents. First-year Chase Metcalf also won her first round matchup, but ultimately fell in the round of 128. Junior Delaney Schurhamer and sophomore Katie Beavin also represented the Dawgs in the tournament but lost their first-round matchups. The tennis team will wrap up their fall season with the Michigan St. Invitation on Nov. 4-6.

The women’s soccer team drew a very close match against the Seton Hall Pirates with the score ending in a 2-2 tie. Butler struck first as junior Claire Farrington put the Dawgs up 1-0 in the 15th minute. They would hold onto this lead until midway through the second half when Seton Hall junior Skylar Matusz scored the equalizer. Then, in the 79th minute, Butler was awarded a penalty kick and redshirt junior Abigail Isger put the Dawgs back into the lead. However, Seton Hall wouldn’t go down without a fight as junior Brina Micheels scored her first goal of the season to tie the game with four minutes left. The score would remain the same, resulting in a draw. The draw had no change in either team’s spot in the Big East standings: Butler held down the fifth-spot, while Seton Hall remained at the bottom of the conference.

The Butler women’s volleyball team lost in three sets on the road to the UConn Huskies. UConn ran away with the first set, outsourcing the Dawgs by 10 points, winning 25-15. While the other two sets were closer, Butler fell short in each of them — losing 23-25 and 22-25 in the second and third set, respectively. First-year Cora Taylor and junior Jaymeson Kinley’s efforts led the way for Butler. Taylor had 26 assists and Kinley had 18 digs. However, it wasn’t enough to keep up with the Huskies fueled by Caylee Parker’s 16 kills. This game resulted in the Bulldogs falling under .500 for both Big East and regular season play.

The Butler football team continues their winning ways, as they defeated Marist 31-10 to grow their win streak to three games. The Bulldogs were playing from behind early in this one as Marist scored the only points of the first quarter. The Dawgs were able to turn the tide in the second quarter due to a Luka Zurak 35-yard field goal and Joey Suchy 12-yard touchdown run. After Marist knocked in a field goal of their own, the game was tied 10-10 going into halftime. The second half was an entirely different story where Butler outscored the Red Foxes 21-0. Suchy found paydirt two more times – once on the ground and the other on a 16-yard pass from quarterback Bret Bushka. The final touchdown of the game was scored by redshirt freshman running back Kwesi Kyei-Fordjour, icing the game at 31-10. With this win, the Bulldogs improved to 5-2 on the year with a 3-1 Pioneer League record. This also extends the Butler’s Homecoming win streak to five games. Ironically, the last time they lost on Homecoming was in 2016 to Marist, so the Dawgs got their revenge in this one.

The women’s volleyball team traveled to Providence where they defeated the Friars in four sets. The Bulldogs were able to control the tempo of the game very early on, winning the first two sets in convincing fashion, 25-16 and 25-18, respectively. They then dropped a very close third set 25-22. To secure the road win, they once again won a set by over five points with a 25-20 victory. Three separate hitters for the Dawgs had double digit kills on the night: redshirt-sophomore Amina Shackleford (14), sophomore Mariah Grunze (13), and senior Megan Sheridan (11). Butler was also fueled by the performances of Cora Taylor and Jaymeson Kinley, who had 35 assists and 21 digs respectively. They will return to Hinkle Fieldhouse this weekend to host Marquette on Oct. 28 and DePaul on Oct. 30.

The men’s soccer team returned to their winning ways as they won their senior night game against St. John’s 2-1, completing the Butler Athletics Homecoming sweep in all of their matchups. This game got off to a fast start with the first two goals of the match occurring in the first three minutes – just 19 seconds apart. Red Storm midfielder Antek Sienkiel scored the game’s first goal and Butler’s Jack Streberger quickly responded with the equalizer. The score remained tied until the 35th minute where Streberger grabbed his second goal of the match and his sixth goal this season. The score would remain the same throughout the rest of the game, giving Butler the 2-1 win. With this win, the Bulldogs improved to 4-3-1 in Big East play. The Dawgs now look ahead to their next matchup on Oct. 29 where they travel to face off against Seton Hall.

Women’s soccer vs No. 16 Georgetown

The women’s soccer team drew Sunday’s game against the 16th-ranked team in the nation — the Georgetown Hoyas. The first half of this matchup was all Butler. First-year midfielder Talia Sommer’s fourth goal of the season put the Dawgs on the scoreboard in the 16th minute, and redshirt junior Abigail Isger doubled that number 12 minutes later. However, Georgetown flipped a switch in the second half. Hoya midfielder Eliza Turner scored in the 64th minute, and with one minute left on the clock, graduate student Emma Davis scored the game-tying goal. The game finished 2-2. With the tie, Butler’s record went to 4-3-2 in Big East play, and will play at Creighton for their final game of the regular season.