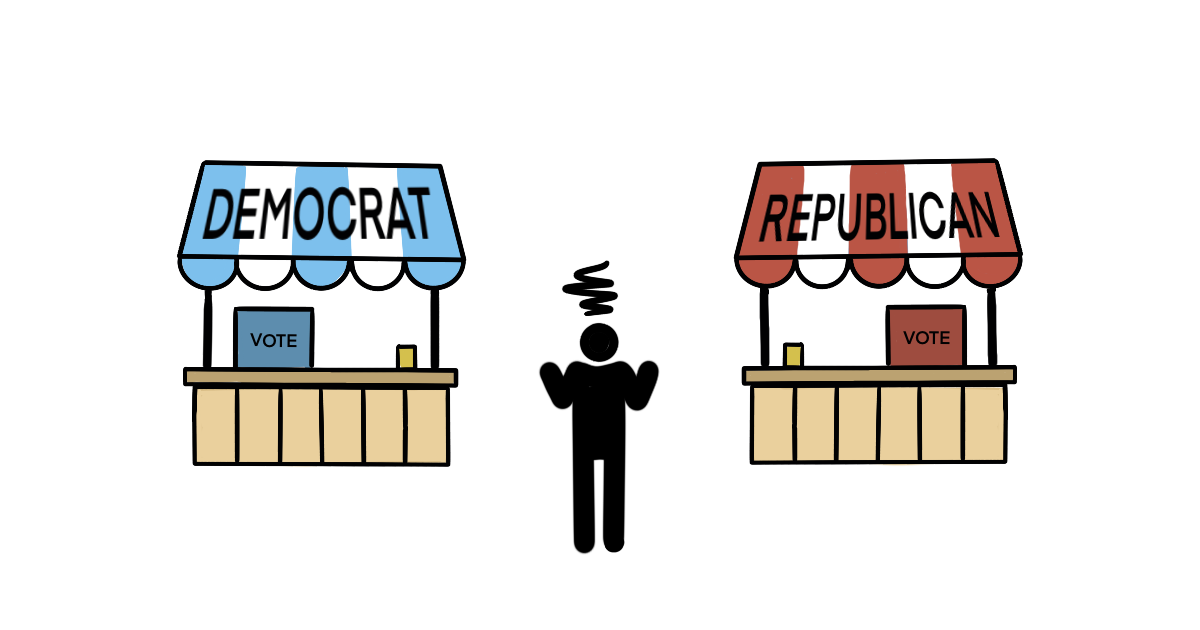 The two-party system has left many young voters disillusioned. Graphic by Haley Morkert.

Leading up to the 2020 election, a plethora of Internet memes emerged, not to promote a favorite candidate, but to encourage people to vote for what many perceived as the lesser of two evils — otherwise known as 46th United States President Joe Biden.

This is a dismal but accurate trend of American politics during the last decade, in which voters are resignedly dragging themselves to the polls with little expectation for an accurate representation of their political beliefs within the federal government. Instead, they are simply opting for whichever candidate’s policies they have a better chance of surviving for the next four years.

Born and raised in such a bleak environment, younger generations are becoming increasingly aware that the two-party system has failed them. But beginning to dismantle this system — which has survived almost since the inception of this country — is a daunting task even for the most experienced activists. As a result, many people who disagree with the current state of electoral politics may feel obligated to continue participating in them anyway, solely due to the absence of any other option.

For instance, at Butler University, we reflect the two-party system in our student political organizations: the College Republicans and College Democrats, respectively. But this isolates a growing number of students from potential political involvement on campus — especially as the binary of Democrat and Republican becomes less and less popular among young voters, who are overwhelmingly gravitating towards the left.

In order to promote these diverse perspectives that a two-party system intrinsically eschews, I believe that Butler should establish a third option for student political involvement that supports more leftist ideologies. This would provide an alternative for people who vote Democrat despite identifying otherwise, and who feel that their voices are not supported in a political system that largely only focuses on preventing the other group from winning.

Although a long-term goal for Butler’s political landscape could focus on founding multiple communities that cater to a wide scope of ideologies, I believe that a specifically leftist organization would address the most immediate need to amplify voices that are incredibly underrepresented in American politics today.

However, while the prevalence and popularity of leftist ideologies has grown, not every college student supports them. In fact, university campuses are often very polarized as people from a myriad of backgrounds and experiences interact and clash in academic spaces.

In order to ascertain whether a leftist group at Butler would be truly beneficial, I reached out to Anna Marcou, a senior double major in English and critical communications/media studies, to hear her perspective on the two-party system — and the potential for additional options.

“I feel like there is the widespread idea that we have a functioning democracy, but I don’t think that’s how things actually operate,” Marcou said. “I think [in] the country as it exists right now … there’s no meaningful way that either party can lead in a way that genuinely benefits the people that live here.”

Marcou, who identifies tentatively as a socialist, added that while she supports the idea of establishing a leftist organization on campus, she believes that it should be open to anyone who aligns with leftist beliefs, rather than making the distinction between specific groups such as communists, anarchists and socialists.

Marcou’s disillusionment with modern-day American politics is a painfully familiar sentiment; I hear it in my classrooms, in my apartment and from my friends on social media. Particularly in the wake of the SCOTUS overturn of Roe v. Wade, this generation of college students appears to be realizing that the state of American politics isn’t just flawed — it’s unsalvageable without massive structural change.

However, while an additional political organization at Butler can’t necessarily be expected to solve these national issues, it could provide students with a safe space to share ideas, engage in grassroots activism and support their communities at a local level.

Mackenzie McQueen, a fifth-year race, gender, and sexuality studies major, envisions in particular an opportunity to encourage reading and discussing political theory that may seem intimidating to students on their own.

“I feel like it could even be like a book club, because I feel like not many people otherwise are going to read theory,” McQueen said. “The ‘Communist Manifesto’ … that’s a short book; the audio book is only an hour. I feel like reading in a group setting would make it less challenging … to talk through these theories and philosophical concepts and work through them.”

Marcou echoed this vision, but indicated that she would like to see more tangible activism efforts as well.

“Historically, other leftist movements have done things like that … the Black Panthers took action within their communities,” Marcou said. “They instituted a free lunch program for Black students, and they functioned as traffic guards for children going to school because the town wouldn’t put in a traffic light. So they did that work in their communities. I think if we had a leftist group on campus…it’d be really cool if their actions and agendas were inspired by other, historically leftist groups.”

This type of grassroots activism isn’t unique to history, either. Present-day progressive activists in Indiana are no stranger to working at the community level in order to improve schools, local businesses, infrastructure and many other programs. By following the examples set by these like-minded groups, much of the work required to build a similar organization at Butler has already been done.

For a country that has spent over two centuries steeped in the two-party political system, any sort of structural change may seem frightening. However, I believe that it’s even more frightening to consider the reality that, if the current system of American politics continues, many people will never feel represented by their government.

In fact, some of those people — such as minorities or historically oppressed groups — will be deliberately exploited and ignored.

Though Sensiba identifies as a leftist and would like to see more representation of those specific beliefs in the political sphere, she also acknowledges that ultimately, the overall goal with these additional organizations should be to diversify politics.

“I have a lot of Marxist and maybe some anarchist ideals, so I feel like that should be represented, and I feel like a lot of people don’t even know that’s an option,” Sensiba said. “And so they’re hesitant, or they’re afraid … but we should be embracing a diversity of opinions and ideals.”

Often, the political world is construed as a space of constant discord among two, starkly different ideological groups. But providing a third option at Butler could finally emphasize the voices and ideas that have been always obscured by reliance on this two-party system. Instead of the post-election gloom that consumed many young voters as they participated in the nomination of a candidate that barely — if at all — represented their views, political processes can be transformed into an opportunity for productive conversation and meaningful change.

“I’ve noticed how disillusioned a lot of younger people are by electoral politics,” Marcou said. “Especially in this last election, it was just about voting for the least bad option — but it’s still an option that we find incredibly problematic and not actually representative of what we want. It can get really disheartening.”

It’s more than disheartening, but students have expressed their support for a third option at Butler. Although dismantling the two-party system of American electoral politics will require much more work beyond the abilities of a single person, organization or even university, the system is capable of being destroyed, and our generation is realizing it. Establishing a leftist organization for Butler students is only the first step in a long but necessary crusade to ensure that all voices are heard, and all people are represented.