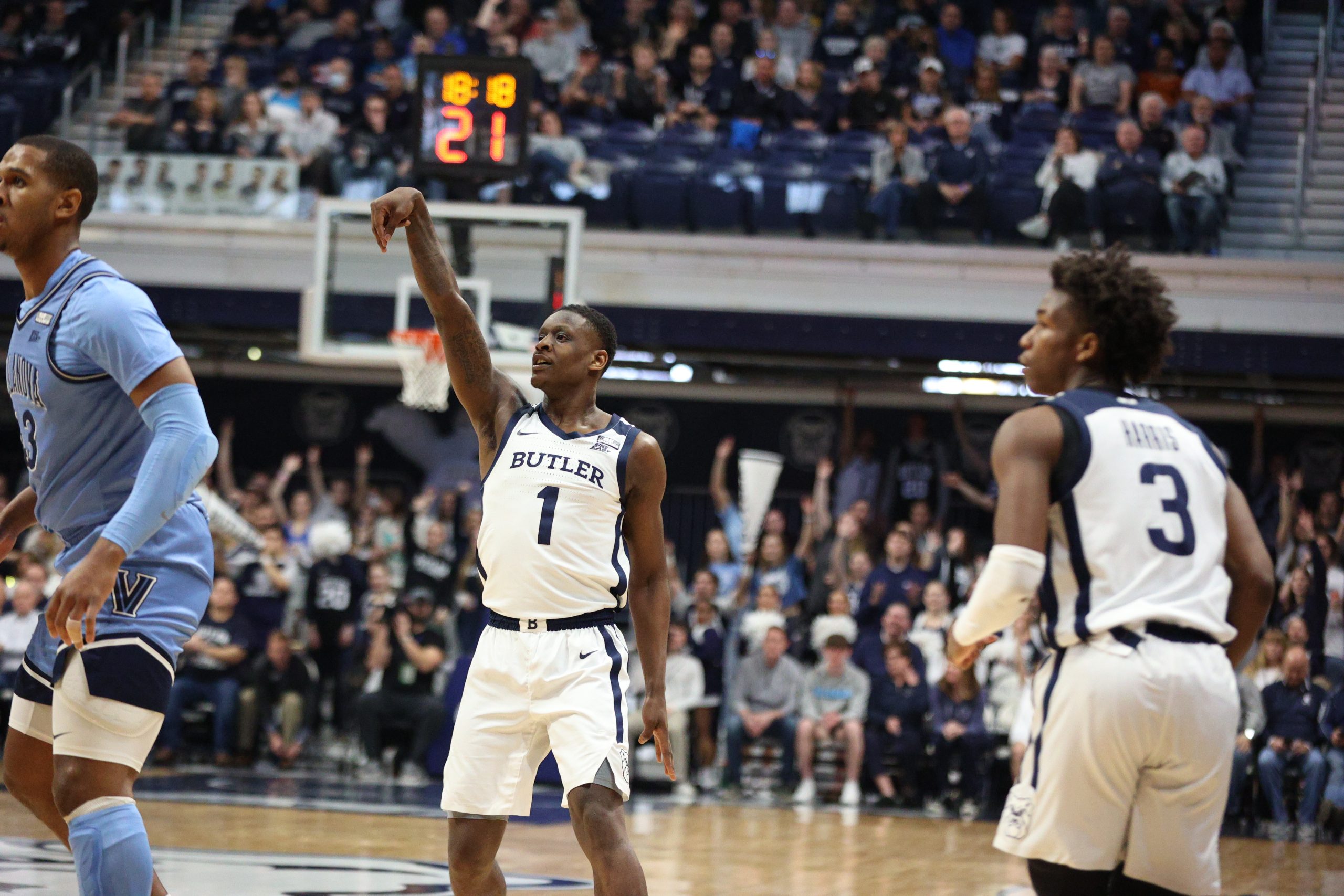 Bo Hodges holds his form after shooting a 3-pointer in Butler’s loss to No. 11 Villanova on March 5. Hodges finished with 12 points and three steals in his final game at Hinkle Fieldhouse. Photo by Claire Runkel.

The Butler men’s basketball team lost their final regular season game of the season, falling to No. 11 Villanova 78-59. This was the Bulldogs fifth consecutive loss, as the team drops to 13-18 on the season — the most losses Butler has had in the last 32 seasons. In the past 30 years, the program has had six losing seasons, three of which have come in the past four seasons.

Chuck Harris led Butler with 19 points and three 3-pointers, and Bo Hodges added 12 points, six rebounds, three steals and two blocks. Hodges only shot 4-15 from the field though, as he and the rest of the team struggled to hit shots throughout the game. Villanova had five players score double digits, led by Justin Moore and Jermaine Samuels with 16 and 15, respectively.

Given Butler’s recent track record against the Wildcats in Hinkle Fieldhouse, there was reason to be optimistic coming into this matchup. Butler had defeated Villanova four of the past five times they played in Hinkle, and each time Villanova was ranked in the AP top 25. However, from the very beginning of the game, it became clear that Hinkle magic was not going to come into play this year.

After Samuels and Simas Lukosius traded 3-pointers in the first three minutes, Villanova ripped off a 20-1 run over the next six. Through those first nine minutes of play, Villanova hit five of their nine 3-point attempts and Butler was just 1-11 from the field. It was a nightmare start for the Bulldogs and immediately squashed any hopes of an upset win.

The remainder of the game was much like the beginning — Butler struggled to do anything positive offensively and Villanova put their foot on the gas. The Wildcats took a 28-point lead at one point in the second half, but the Bulldogs’ deep bench players ended the game on a 6-0 run to make the game — somewhat — more respectable.

Let’s go beyond the box score in Butler’s last game before the Big East tournament.

In what has become the story of the season for Butler, the team once again found it very difficult to come up with positive offensive sequences. While the Bulldogs did generate some open looks throughout the game, most of the team struggled shooting the ball. The team shot a combined 20-55 from the field and 5-25 from three. Butler will struggle to win any game shooting that poorly, especially against a top 15 opponent.

Chuck Harris was the only Bulldog to really get things going, as he scored 19 on 7-13 shooting. Harris has had a confusing season, as he failed to score a point against Marquette on Feb. 26 and then followed that up with his fourth highest scoring game of the season. Harris has had six games this season scoring three points or fewer — including three goose eggs — but has also scored 18 or more points on six occasions. It’s unclear game-to-game which Harris will show up, but when he is playing well, he is far and away Butler’s best scorer.

The rest of the team couldn’t get anything going though. Bo Hodges, Bryce Nze, Bryce Golden, Aaron Thompson and Jayden Taylor combined to shoot 9-36 from the field, a 25% clip, and 1-15 from three. Golden started but only played 11 minutes and did not record a point or a rebound. He also went scoreless earlier this season versus Villanova.

It is no surprise that Butler struggled to score against a stout defense like Villanova, but it highlights a wider problem within the program. Although Harris will have his nights, Butler has lacked a go-to scorer since Kamar Baldwin and Kelan Martin graduated. This, coupled with the slow pace Butler plays with, has the Bulldogs ranked dead-last in scoring among Big East teams, scoring six points per game fewer than second-to-last Creighton. Butler also ranks last in 3-point field goal percentage and second-to-last in field goal percentage. No reasonable fan should expect Butler to be atop any of those charts, but being so inept offensively compared to the rest of the conference is why Butler has fallen to the lowest tier in the Big East in the past two seasons.

After the game, Thompson was critical of not only Butler’s offense, but the effort on defense as well.

“When we started missing shots, they found a way to heat up and that’s when they kind of separated,” Thompson said. “We were a little bit too tied to our offense today I think, in terms of energy and pace offensively. And defensively, I feel like we gave up a lot of easy ones at the basket, there wasn’t enough force when they drove. They were going right through our chest. Everyone was a culprit tonight, including me.”

With DePaul’s loss to UConn, Butler clinched the nine-seed in the Big East tournament and will play Xavier in the first round. Butler knocked Xavier out in the first round each of the past two seasons, but the Musketeers swept the Bulldogs this year. It will be a tough task, but Xavier has been on a lengthy cold streak. The Musketeers have only won two of their last nine games, one of which was against Georgetown who did not win a conference game this season.

That game will open up the tournament at Madison Square Garden on Wednesday, March 9, at 4:30 p.m. If Butler wins, they will play No. 9 Providence the following day at noon. Butler’s only chance at an NCAA Tournament bid is to win the tournament, but a win or two could place the Bulldogs in a lesser postseason tournament like the NIT or the CIT.

After the senior day ceremony, head coach LaVall Jordan told Bulldog fans that their eyes are on the Big East tournament, and he believes this team can win the whole thing.

“We’re gonna go to New York and fight with everything we have to get this thing to last as long as we can,” Jordan said. “And if there’s a group that can do it, it’s this group. There’s something in there that we haven’t seen and we’re fighting every day to get it out.”

The Butler Collegian will be covering the Big East tournament live from Madison Square Garden. Follow @henrybredemeier on Twitter for updates throughout the tournament.