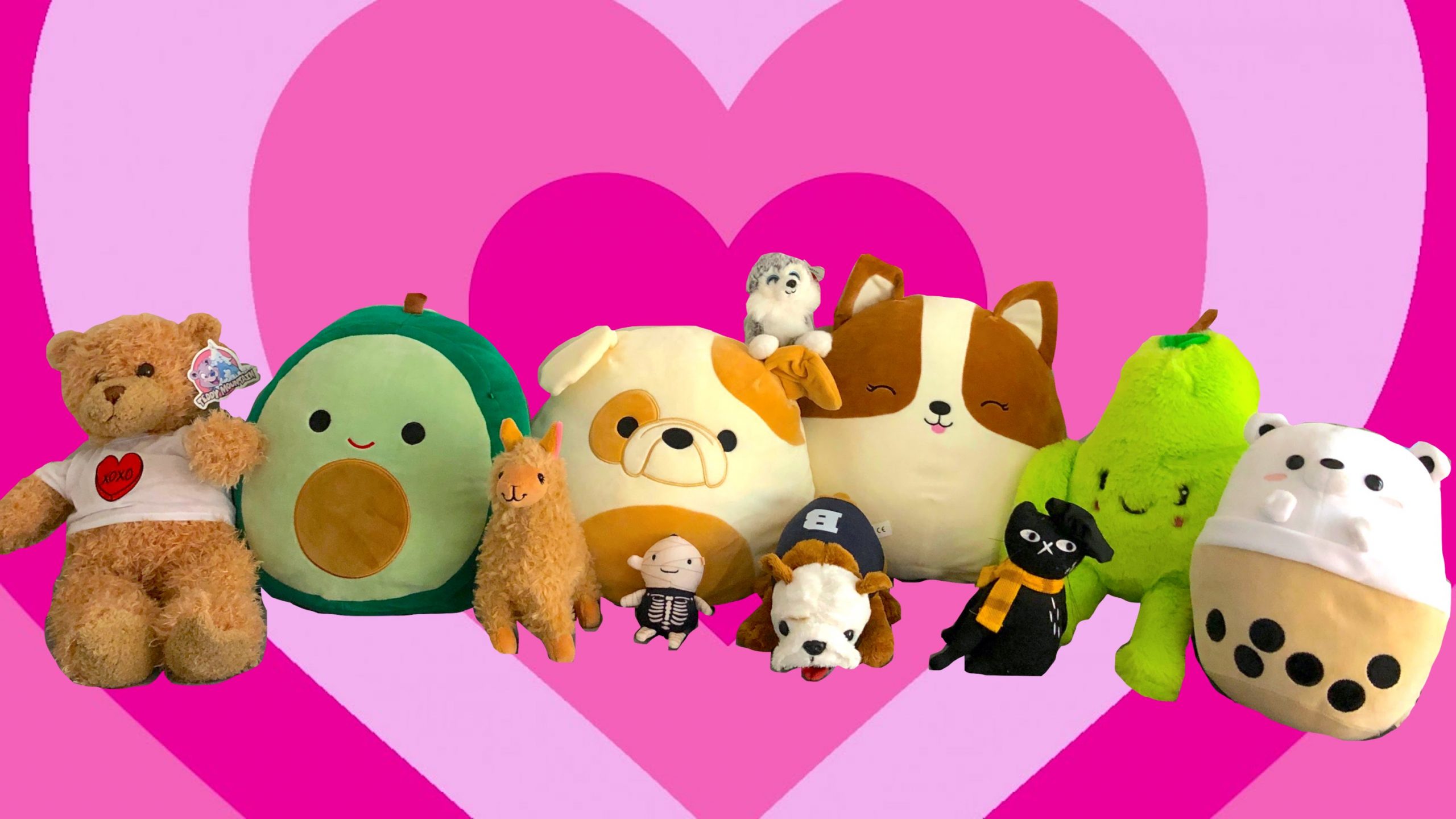 Natalie Link has an assortment of huggable friends in her dorm on campus. Photo courtesy of Natalie Link.

According to a viral TikTok and Tweet, all hot girls have stuffed animals. As a girl who owns a stuffed animal and self-identifies as “hot,” I must say that I am a living, breathing example of the stuffed-animal-owner-to-hot-girl pipeline.

The moment you receive your first stuffed animal, a new-parent glow will illuminate your face and eyes. The inviting glow will attract an infinite number of suitors and model agencies alike. This glow is just the beginning of the hot girl pipeline. Until you mother a stuffed animal, you will never know this sexy glow.

You may be asking yourself how a fabric sack full of stuffing could possibly make a person more attractive. Like you, I once associated stuffed animals with people who just couldn’t grow up. I equated stuffed animal hugging with thumb-sucking. However, these sacks of stuffing are warm, comforting and they make you hotter; there are no cons –– only pros.

“I think having an unhealthy obsession with an inanimate object that brings you comfort obviously makes you more attractive,” Eilers said. “[My] little brown bear emphasizes my brown hair, my brown eyes, my Puerto Rican features. It’s just science … I can feel it in my bones. I think that it’s true. It’s my truth, so it’s true.”

Eilers’ science may not be exact, but her observation is a common one. I have had Cuddlebear –– my own stuffed companion –– for the past four years. In those same four years, I am confident that I have grown significantly more attractive and confident, so in this case, correlation does equal causation.

“I feel like every hot girl has stuffed animals,” Link said.

Cuddlebear enjoys the Irvington views while awaiting my return from class. Photo courtesy of Hallie Anderson.

While everyone with a stuffed animal is, according to Eilers and Link, scientifically and irrefutably hotter than the average person, the stories of all stuffed-animal-havers vary. Some received stuffed animals at birth, while others have been collecting them over the years. Some people have only one cherished plushie, while others have dozens from ex-boyfriends, ex-girlfriends, family members or friends.

I received Cuddlebear about four years ago. He is quite obviously a Christmas bear,  accessorized with a red and black plaid scarf. Cuddlebear is chunky and huggable and has holes on his paw and in his armpit. He is the perfect cuddling size — hence his name — and while I usually neglect him throughout the day, I can’t fall asleep without holding him.

Jackie Andrzejewski, a junior creative media and entertainment major, has a similar story. She received her dear Build-A-Bear green frog, Puddles, almost three years ago. They have been inseparable ever since.

“[Puddles] is what I needed to center myself,” Andrzejewski said. “He goes with me everywhere.”

As Andrzejewski drove home in the horrible icy weather earlier this month, Puddles was in her lap the whole time. Andrzejewski believes she never could have made the trek without his fluffy green warmth in her lap.

Our stuffed support systems bring us through the darkest of times. Andrzejewski was quite literally driving in the dark, and Puddles carried her through. These little creatures also remind us of the good times as much as they help us through the bad ones. They can represent a happy occasion, like how Cuddlebear reminds me of Christmas, and they can also remind us of the loved ones who gifted them to us.

Kyle Kane, first-year political science and history major, thinks of his long-distance girlfriend when he sees his stuffed animals. She has given Kane many stuffed friends over the years, but Dennis the Squishmallow is Kane’s favorite of the collection. While he is more of a casual keeper of stuffed animals, Kane had some direct advice for those who hate on his fluffy friends.

“Put your energy somewhere else,” Kane said. “Go hate racists. Go hate homophobes. Why do you hate me for having a stuffed animal? I feel bad for your mother. How would she feel knowing that you put so much hate out into the world for such little reason?”

Luckily, Kane has yet to encounter a hater on campus, so his response has not been employed. However, if you would like to diss someone for having a stuffed animal, I would choose anyone but Kane, who remains prepared with that lethal retort.

Eilers also feels passionately about warding off the haters. After investigating the root of their hatred, Eilers has formed yet another hypothesis, and it’s quite simple.

“They hate me cause they ain’t me,” Eilers said.

I, too, would bully those who had a gloriously huggable floof like Cuddlebear if I didn’t have one for myself. Jealousy can truly bring people to extremes.

Luckily, it seems that Butler’s stuffed animal community is welcomed by other students. Much like Kane and Eilers, Link and Andrzejewski are also passionate about defending their loved ones against haters. However, they also agreed that they had not experienced many haters on Butler’s campus. Link believes this could be because of Butler’s strong stuffed animal culture.

“I feel like Butler has a big thing for stuffed animals,” Link said. “I mean, this Friday night they’re doing a Butler stuffed animal event. And guess what? I’ll be there.”

Link also pointed out the bookstore’s abundance of Butler Blue IV stuffed animals and plushies as being symbolic of Butler’s thriving stuffed animal culture. Andrzejewski sees students’ positive outlook on stuffed animals as a more recent cultural shift as a result of quarantine.

It’s true. Many made the jump to parenthood over quarantine –– stuffed animal parenthood, that is. These people now reap the benefits of being more attractive than the average person. Perhaps this culture of stuffed animal support could not have been possible without the pandemic and lockdown. Humans cling to comfort in times of uncertainty, and Cuddlebear certainly served as my comfort during that difficult time.

So if you’re thinking about taking a risk, being a hot girl and feeling loved, get a stuffed animal. If instead, you choose to hate on those who do, Eilers has a suggestion for you.

Get a stuffed animal, but if you choose not to, don’t trash talk mine.