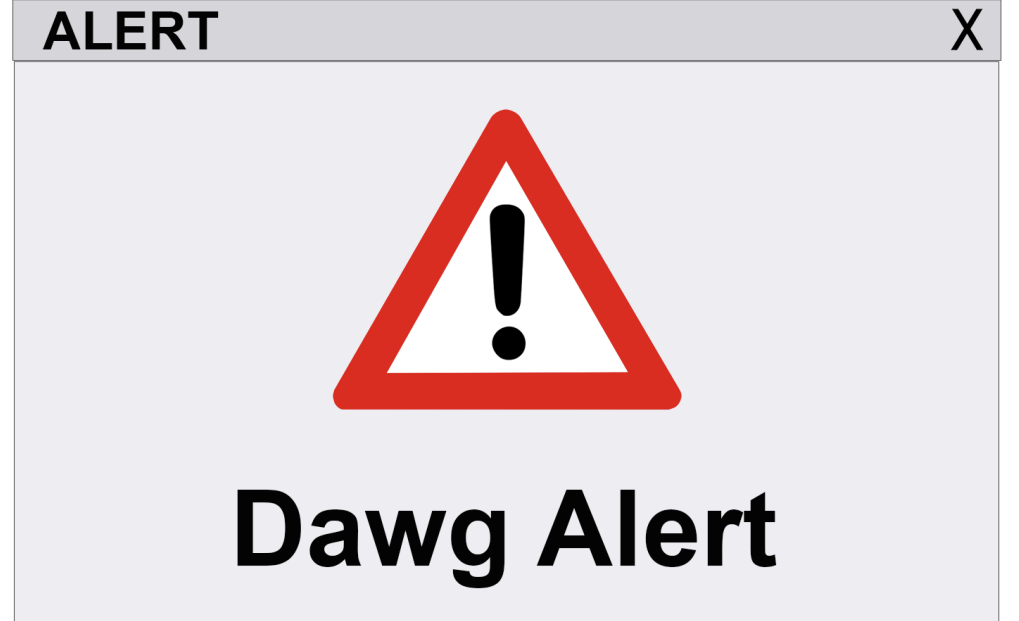 16 Dawg Alerts, Butler’s emergency notification tool, were sent to the Butler community in the past two weeks. These included alerts surrounding an IMPD suspect on campus. Graphic by Abby Hoehn.

In the last two weeks, from Jan. 26 to Feb. 8, students, faculty and staff have received 16 Dawg Alerts. Used as a campus wide notification system, Dawg Alerts could be sent out to inform students in the event of a campus emergency, weather delay or campus closing.

The Clery Act mandates all college campuses to have an emergency notification system for situations that pose a health or safety risk for students.

Recent Dawg Alerts have included an administrative notification for a change in the Dawg Ride vehicle, a campus closure notification due to snow and a shelter in place notification.

The Butler department of public safety sent an email out about the events that had occurred a few hours after the pursuit. A suspect believed to have been involved in a theft entered campus on foot and was apprehended by a BUPD officer between Robertson Hall and Gallahue Hall. The email said the suspect was unarmed and never entered any buildings on campus.

Sophomore criminology and psychology major Ash McIntosh was going to work at The Center for Urban Ecology and Sustainability farm in I-lot when a man approached her on the sidewalk in between Fairbanks and Gallahue.

“The man looked extremely out of place,” McIntosh said. “He had baggy sweatpants, a red shirt and a black jacket. He was walking in the grass then walked up to me holding a wad of cash and told me he would give me the money if he could use my phone to call his mom. I told him I was running late to work and needed to go, but he kept pushing. He told me he could just give me the phone number, and right away I knew this was the guy they were looking for.”

McIntosh said the only message she had received when the man approached her was the original alert warning saying BUPD was assisting IMPD East of the intramural fields. The alert to shelter in place had not been sent yet.

“There was no one else in the vicinity so I told myself to stay calm and do what he wants,” McIntosh said. “I told myself to assume he was armed and that I could be in danger. He gave me the phone number and kept saying that I needed to send his exact location to that phone number, which was supposedly his mom. I told him that I needed his name just in case I got a call back. I dialed the number and no one answered which was great because then I could save the number to my recent call list to keep hold of it. I faked the phone call and went down the I-lot stairs pretending to talk to his mom.”

Chief of Public Safety John Conley said Dawg Alerts are sent to help inform people what is happening on campus, but there is no way to ensure all students see the alert in time.

“Nothing is a cover-all,” Conley said. “A good example is last week’s Dawg Alert regarding IMPD … I was in the center of campus, making sure that we didn’t have a suspect come up to the back of campus and enter a building. There were just tons of students out walking that either never got the alert, or their cell phones were turned off, or something. So, I can’t really say there’s one cover-all and I think that’s why it’s good that there are multiple means of delivery.”

Dawg Alerts can be delivered in three ways – email, phone and Alertus Desktop Notifications. Although text messages typically reach students the fastest, the Alertus notifications ensure that all faculty and staff are notified — even when their cell phones are off.

Junior pharmacy major Avery VonDielingen was in between classes having lunch at her sorority house when she got the original Dawg Alert about IMPD on campus.

“It would have been nice to know where we needed to stay away from on campus,” VonDielingen said. “At that point they probably could not have given us as much information as they were trying to figure it out for themselves.”

Conley said Dawg Alerts can typically be written in a matter of seconds because BUPD uses pre-written templates. For example, there is a template for weather alerts that only requires the input of a few pertinent details before it is sent.

Sophomore marketing major Audra Camadeca was in an accounting class when the Dawg Alerts were sent out. Camadeca, along with other students in her class, felt that greater precautions should have been taken to make sure students were kept safe.

“Our professor did not want us to lock the door because of the sign above the door that said not to touch the dead-bolt,” Camadeca said. “Kids locked the doors anyway because we all did not really know what was going on. I feel like they should have given us as much information as they could have in that Dawg Alert. Nobody even told us what shelter in place really meant.”

On Jan. 27, a couple of days before Dawg Alert was used for the IMPD chase, an administrative Dawg Alert was sent out about a change to the Dawg Ride vehicle stating, “Administrative Alert: Until further notice, All Faculty Staff and Students, the Dawg Ride will be a sports van for information.” Over an hour later, another alert was sent to clarify the meaning of the first alert.

Conley said that, over the past few weeks, he has heard that students are irritated by the high frequency of Dawg Alerts. He is currently trying to find a way to minimize student distraction and irritation so that when Dawg Alerts are sent, students pay adequate attention to them.