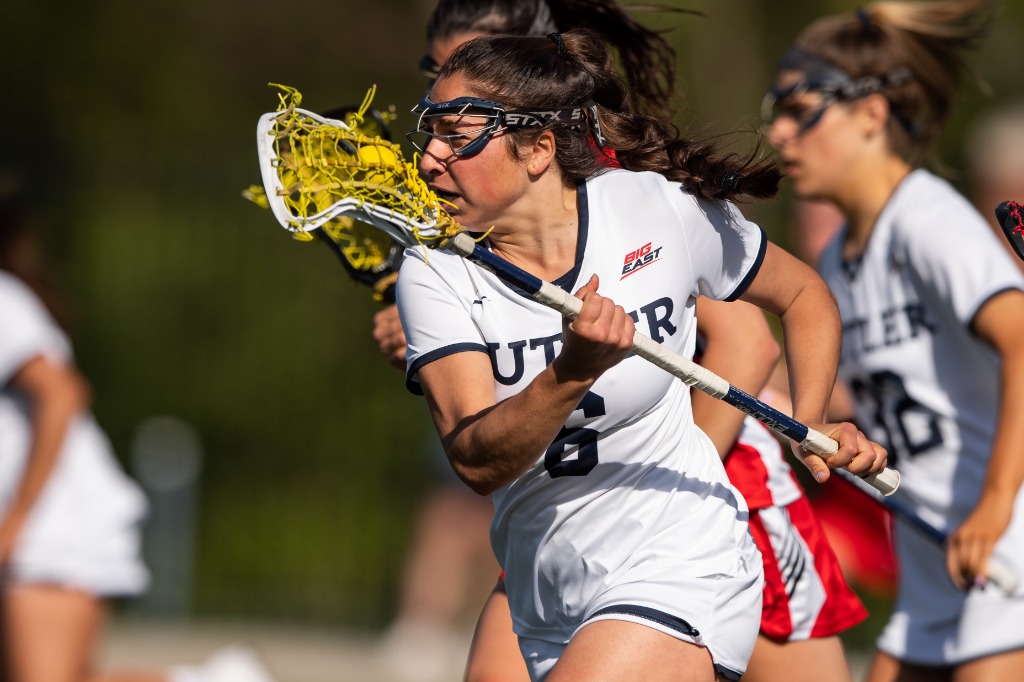 Midfielder Elizabeth Davide rushes towards the ball during a matchup against Denison University on April 14, 2021. The Bulldogs went on to win the matchup 12-9 for the team’s only win of the 2021 season. Photo courtesy of Butler Athletics.

The Butler lacrosse team will begin their first full season since 2019 on Saturday, Feb. 12, with an emphasis on building team chemistry and having consistently strong play all over the field.

Last season, the Bulldogs had their first game postponed and were never able to build momentum in a tough schedule — where they finished 1-11. While they did play more games last season than in 2020, they were still affected by COVID-19 by playing a majority Big East schedule.

The head coach for the Bulldogs, Cecil Pilson, will be entering his sixth season in charge. Pilson led the team to their strongest finish in the 2020 shortened season. The team set a program record of five wins — including winning their first season opener in team history. Pilson explained how the 2021 season was difficult with eight out of the 12 games being conference games and how he was looking forward to the impact of more games on the schedule.

“We are really excited about having a non-conference slate again,” Pilson said. “It is very helpful for any team to be able to play a lot of teams before you dive into that conference play.”

The ability to play those extra games can also help a team build confidence and show off its depth. Pilson said that depth is important especially for a team like the Bulldogs to have the ability to gain possession on the face-off.

“This year I think we are really deep in the midfield,” Pilson said. “It will be very helpful for taking the draws and getting the ball on both sides of the field. If you are going to have a space that’s deep in the college game, the midfield is the area you need it.”

In the midfield resides junior Kayla Kielbasa, who led the midfield in points a season ago with 12 and finished top five on the team in goals with eight. Another midfielder to monitor is senior Lindsey Schreiber who started in only one game, but played in all 12. She was second in points at the midfield position and tied for the third most goals on the team with 10. The midfield is also reinforced by the return of senior Ellie Eisenklam. She missed the entire 2021 season, but played in all seven games in 2020 and is a boost for this team.

While the team improves on the field with Eisenklam’s return, they also gain her leadership ability off the field, as she was named one of the three team captains. The three captains are Eisenklam, senior defender Sarah Dickinson and senior attacker KK Callaghan. Eisenklam and Callaghan both have the experience necessary to be part of the leadership committee for the team.

Callaghan started in eight of the 12 games during the 2021 season and was the team leader in points with 15. She finished second on the team in goals with 11 and finished tied for second on the team in assists with four. She and her other captains want to emphasize the importance of team culture this year since it is a new season.

“We really wanted to change the culture of the team with new goals and a ‘nothing to lose’ attitude,” Callaghan said. “We were recruited to help make this program into what it needs to become and we can do that this year.”

Callaghan is also excited about a larger season schedule after the difficulty of playing a condensed Big East schedule.

“They had us playing two games in a weekend,” Callaghan said. “No lacrosse player should have to do that. This year we are ready to go [and] all 10 seniors are ready to play.”

The Bulldogs will need to be perform and will certainly be tested with this schedule. The first of the notable non-conference opponents is Central Michigan, who finished 9-6 last season and 7-2 in the MAC conference. The following game will be against Louisville, who finished 5-11 last season. However, 12 of their games were against ranked opponents and they are in the ACC, which saw seven teams finish in the top-25 of the RPI rankings last year. Louisville is much better than their record indicated and will be a very difficult team to beat.

The Bulldogs are eager to improve on last season’s pitfalls and Eisenklam is looking forward to getting back on the field.

“I am beyond excited to get this season started and prove ourselves in our out-of-conference and Big East games,” Eisenklam said. “It was truly a privilege to be voted as one of the captains of this year’s team.”

Eisenklam and the other captains know their responsibilities for setting the tone. They also know that their team has the potential for big things and are on a team that cares about each other.

“I am looking forward to being part of a very talented team who just love to play the game,” Eisenklam said. “We have an amazing group of girls who encourage each other to be better every day.”

Part of this talented team are 11 freshmen with three attackers, four midfielders, three defenders and one goalie. The area of the field to watch with the freshman will be the defense. The defense lost seven seniors from last year, so the trio of Kiersten Farley, Katie DeShan and Meaghan Trainer might be pushed into early action.

The Bulldogs season opener will come on Feb. 12 when they travel to Kent State to face the Golden Flashes. The Bulldogs will remain on the road until March 6 for their home opener against Detroit Mercy.