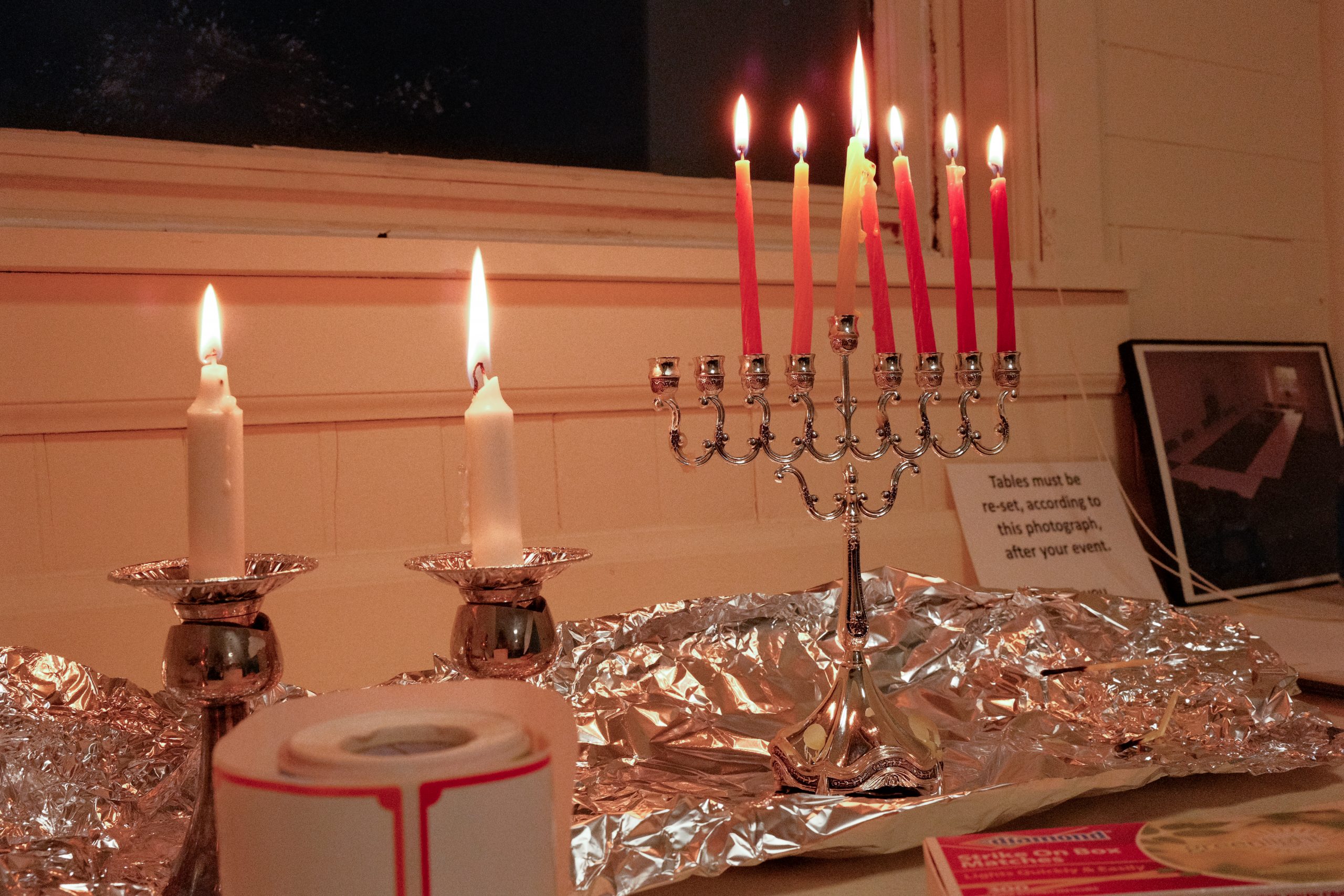 Festivities and decorations for the CFV Hanukkah celebration held on the evening of Dec. 3, 2021. Photo by Julian Cirnigliaro.

From Nov. 28 to Dec. 6, many Butler students celebrated the Jewish holiday, Hanukkah. This year, the holiday fell during one of the busiest times of the semester, requiring students to find a balance between their Hanukkah celebrations and keeping up with their classes. Despite this difficulty, Butler students still found many ways to celebrate the special time this year.

One of the major traditions of Hanukkah is lighting one candle on the menorah each of the eight nights, signifying the amount of time candles outside of the Second Temple in Jerusalem miraculously remained lit despite a low oil supply. For upperclassmen who can have real candles in their residence, this is not a difficult tradition to celebrate. However, for those living in dorms where candles are not allowed, it is not as simple.

First-year history major Maya Sharon said she has a light-up menorah she has been using to celebrate. Sharon explained that she has been calling her family every night and “lighting” the candle on her menorah as they light a real one at home.

Senior psychology major Julianna Neuger now lives in a house where she can light a real menorah. However, she remembers the struggle of not being able to do so in her dorm as a freshman.

“I remember being a little bummed because I like lighting the menorah,” Neuger said. “It’s really pretty, but my parents found … a light-up one that’s battery operated. It’s not the same, but I mean, it’s something.”

Traditional food is another important aspect of Hanukkah celebrations that not all students have access to. Potato latkes and sufganiyot, or jelly-filled donuts, are both commonly eaten as part of Hanukkah celebrations. Senior communication sciences and disorders major Molly Stern said she and Neuger, her roommate, planned to make latkes together.

For underclassmen without a kitchen, Butler Dining helped students celebrate by serving latkes and sufganiyot. Neuger remembers that during her freshman year, they also served challah, a special type of bread that is popular in Jewish culture.

Additionally, a fun way for Butler students to celebrate the holiday together was at a Hanukkah party on Friday, Dec. 3, hosted by Butler Hillel, a religious organization for Jewish students. At the party, students were served a Hanukkah Shabbat dinner and went through customary blessings over the food and the menorah. They also played dreidel and wrote cards for a child at St. Jude Children’s Research Hospital.

“It was just kind of a fun event for everyone to get together and just enjoy a meal together,” said Butler Hillel President Lauren Carrier, a senior finance and economics double major.

For Neuger it was “a little hard to balance” both studying for finals and celebrating Hanukkah. Stern agreed, noting that she tried to find time both for getting her work done and taking the time to relax and celebrate, even if it required doing things a little differently than she might at home.

“Even though you’re supposed to probably light the candles at a certain time every night, [I have] kind of just [been] pushing it around to kind of work with my schedule,” Stern said.

Sharon similarly noted that she had some challenges with trying to find a time to FaceTime her family and light the menorah, given busy schedules and a time difference between Butler and her hometown.

“That’s just been the biggest thing, is making sure I can call them,” Sharon said.

Sharon explained that this year was the first time she had not spent Hanukkah with her family, so making time every evening for this call was important to her. Luckily, she mentioned that since Hanukkah started on the Sunday students returned back from Thanksgiving break, she was still able to spend some time celebrating with her family before heading back to campus.

Carrier also noted that Rosh Hashanah and Yom Kippur are more of the main religious holidays for Jewish students, rather than Hanukkah. Since Hanukkah does not have as many traditions as these other holidays, she said it has not been too difficult for her to celebrate along with the approach of finals.

“It honestly just kind of adds a nice component to the day to just take 10 minutes and focus on … a spiritual aspect, and then continue on with your day,” Carrier said.

Still, celebrating any holiday during the approach of finals week is not ideal, but Butler students found fun ways to celebrate.