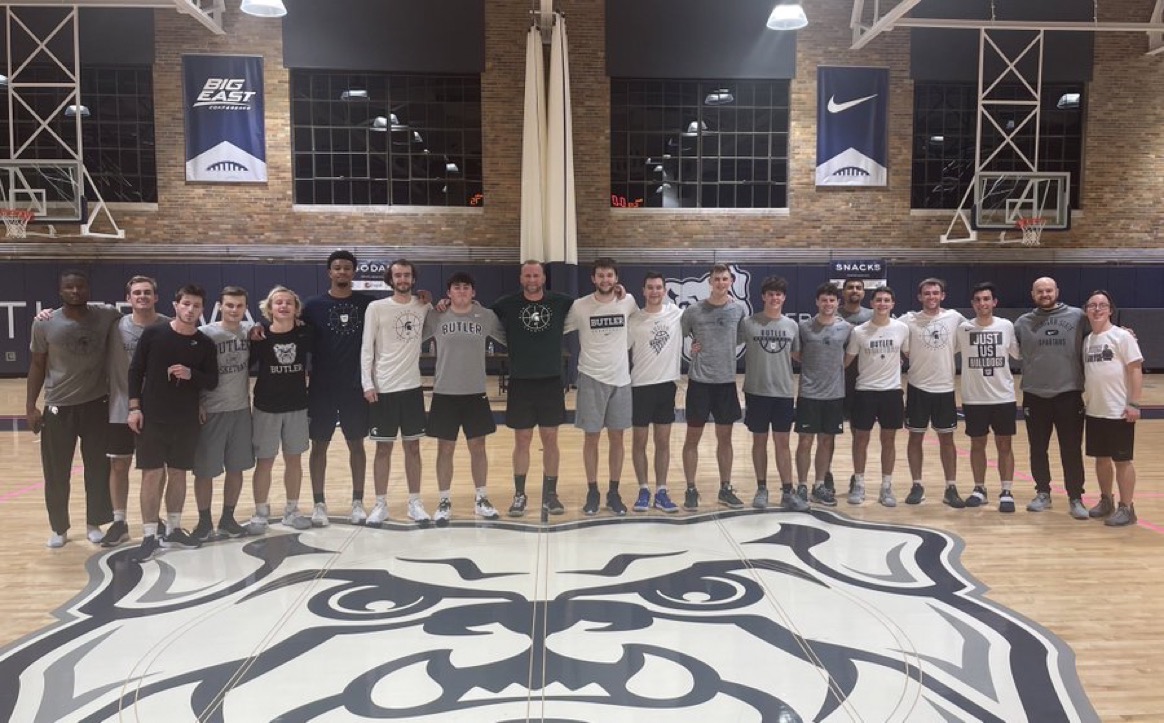 Butler and Michigan State men’s basketball managers after a friendly exhibition matchup between the programs on Nov. 16. Photo courtesy of @ButlerManagers.

The Butler men’s basketball program is a staple in the city of Indianapolis and has a loyal Bulldog fanbase, receiving constant support and dedication from the Butler community  — especially from their student managers.

Sports reporter Katerina Anderson sat down with three of the managers on the team. Two of them are sports media majors and one of them has had family members that have played basketball at the Division I level.

Jacob Lindsey is a junior sports media major from Fort Wayne, Indiana and a member of Lambda Chi Alpha fraternity. Lindsey grew up playing basketball and soccer and continued his relationship with basketball into college by becoming a manager at Butler.

Lindsey heard of the position in high school while one of his friends from his basketball team was being recruited by Butler. This was the opportunity of a lifetime, as Lindsey grew up a Butler basketball fan and has always wanted to come to Butler from a young age.

Lindsey applied to become a manager in 2019 and has been a part of the team ever since. Lindsey believes that what makes Butler basketball special is the respect given from top to bottom among the program .

“Butler really takes care of their own people,” Lindsey said. “That goes from the players and the staff all the way down to the managers. I think Butler has a really good track record of managers getting jobs in sports.”

Lindsey said his dream job has always been to coach college basketball and aspires to have any type of career in the basketball industry. He believes that managing is a great way to gain experience and make connections for the future.

Jack McHugh is a sophomore sports media major from Manasquan, New Jersey and a first year men’s basketball manager — due to COVID-19 hindering any new managers from being hired last season. Since his high school did not have a basketball team, McHugh got involved elsewhere by coaching eighth grade basketball. He said it’s the sport he enjoys watching and playing the most.

When asked what the program looks for in managers, McHugh said a genuine love and interest for the game is essential to being a Butler basketball manager — due to the amount of work that the job entails.

“They look for someone that’s willing to do the dirty work and just always be there because it’s kind of a grind,” McHugh said. “ If you’re not there and if you’re not dedicated, then you’re not going to make the most out of the opportunity.”

McHugh said he has always wanted to work in sports and hopes to become a director of operations or basketball analyst in the future for a high-end Division I team. With this goal in mind, he decided to become a manager — citing that he would need to work his way up the ranks to get where he wants to be. McHugh believes that starting out as a manager will put him on the right track towards achieving this goal.

Kai Bates-Diop is a junior psychology and Spanish double major and sport coaching minor from Bloomington, Illinois. Bates-Diop grew up immersed in college basketball with both his dad and older brother having played at Division I institutions — Creighton and Ohio State, respectively.

He was set to follow this same path up until his sophomore year of high school when discovered that he had a heart condition known as hypertrophic cardiomyopathy. This means that his heart walls are thicker than normal making it harder for blood to be pumped. Due to his condition, Bates-Diop had to give up on the idea of playing basketball in college.

“The next best thing for me was to figure out how else I can get involved,” Bates-Diop said.

This led him to look into managing in order to continue his love and dedication to the game. He describes himself as “a fly on the wall,” using his position as a way to help him grow his understanding of this level of basketball. Managing has taught him how to work better in a team environment, good communication skills and how to adapt to whatever situation he could possibly be thrown into.

Bates-Diop recommends to anyone who has a passion for the game like him to consider Butler.

“If you want to be a part of any or if you have any interest in college athletics, a place like Butler is definitely a good place to start,” Bates-Diop said. “It gives you that kind of more intimate environment to build those relationships. So I feel like that’s definitely something unique.”

Bates-Diop plans on attending graduate school to pursue a master’s degree in the realm of psychosocial aspects of physical sports. His eventual goal is to enter the administrative level of college athletics and become a director of basketball operations at a large institution like Michigan State or Oregon State.