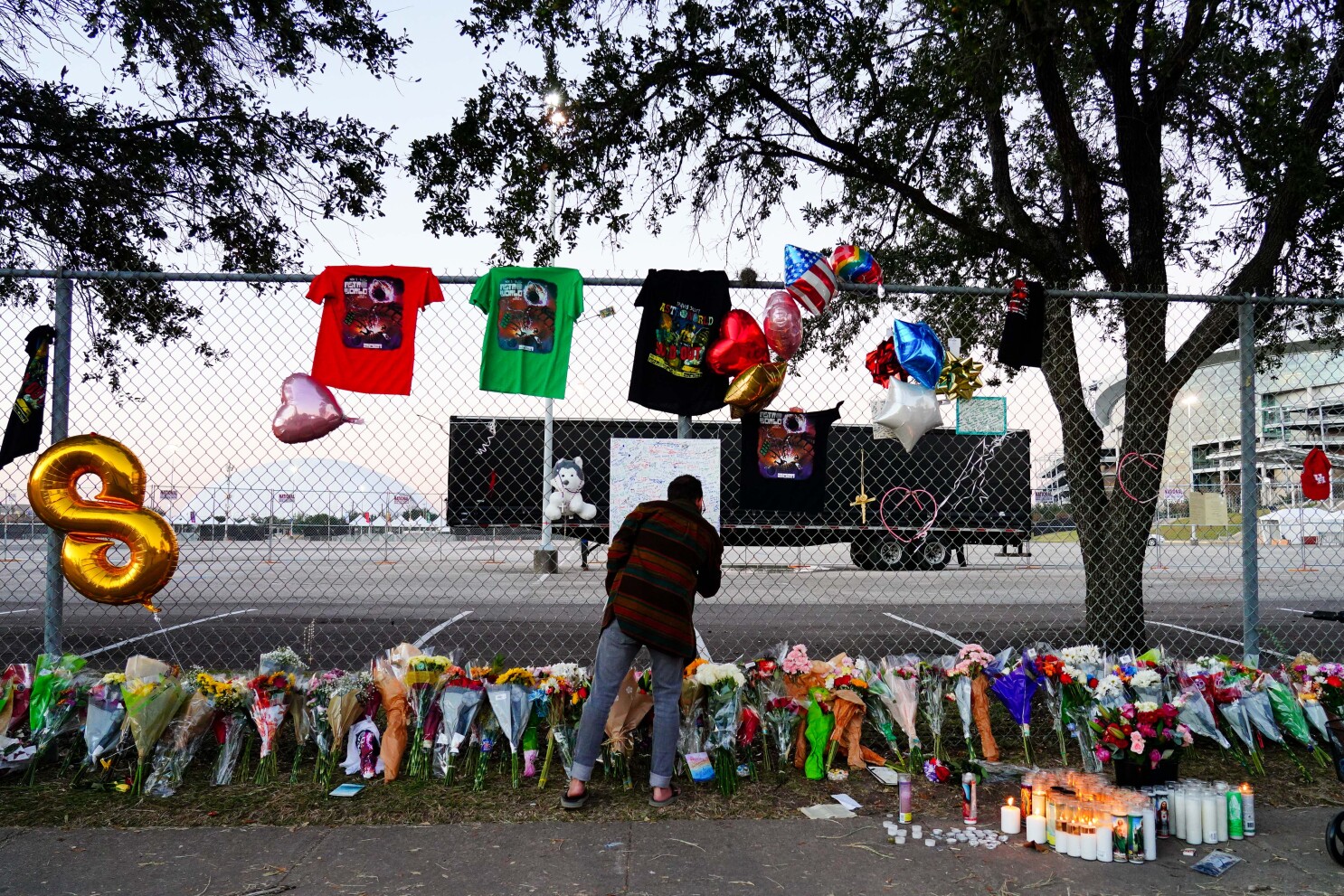 People leave flowers, shirts and candles outside of NRG Park where the ASTROWORLD festival was held. Photo courtesy of Los Angeles Times.

Authorities are investigating the events that led to the deaths and injuries including what caused a crowd surge, whether the show had appropriate security and reports that someone was injecting concertgoers with illicit drugs.

Houston police officials estimated there were about 50,000 people who attended the event.

Nate Corrales, a junior management information systems major, recently attended a concert with a much smaller crowd but could still see how an artist with a mosh pit culture — plus a larger crowd — could lead to tragedies such as those at Scott’s festival.

“So I recently went to a Trippie Redd concert, and it was probably like 4,000 people there and I remember being in the pit and thinking, ‘yeah this is intense,’” Corrales said. “Finding water was difficult, and there were about three or four people that passed out during the concert, and so when I heard [ASTROWORLD] was 50,000 people, I was like, ‘holy crap. ’It was easier for us to see people that had issues and for the crowd to be like ‘hey, this person needs help,’ since we were in a smaller crowd.”

Many people aware of the event, and after seeing endless videos on social media, agree that the festival did not have enough security, nor were there enough safety precautions to manage that large of a crowd.

Ellie Flowers, a senior music industry studies major, said the management of the festival should have been prepared for this situation, especially considering the excitement people have after not attending concerts due to COVID-19.

“I feel like when it is a large music venue that is outdoors [and] super crowded [and] people haven’t been able to go to live shows for a year, you know people are going to be rowdy,” Flowers said. “It’s one of those times where [it would be reckless to] have security understaffed in that scenario.”

Corrales feels like there should have been barriers to limit the number of people in one space.

“Personally, I think there should have been barriers blocking off a few thousand people at a time so that you just never have 50,000 people behind you pushing you forward [because] that’s not good,” Corrales said.

The big question now is: who’s at fault? As more information about this tragedy is released, controversial opinions are formed as people look for who to blame. Flowers said it is hard to put the blame on one person. However, she thinks Live Nation is most at fault.

“I probably don’t think you could blame the crowd itself … I don’t know if Travis himself is fully to blame either,” Flowers said. “I feel like if anybody it would be more on the fault of the venue and the promoter, like Live Nation who organized the event, because ultimately you are the ones that are organizing the event; you are the ones who need to kind of plan … you need to be prepared for those types of last-case scenarios.”

Live Nation and Scott are being targeted with more than a dozen lawsuits over the death and injuries at the festival.

CJ Matias, a junior pharmacy major, agrees that the event was not well–managed from what he saw in videos on social media.

“I saw clips of [Scott] performing, and then there are people doing CPR, and I remember there was this video where he was like, ‘who’s telling me to stop,’ and then he just keeps on going while you see people trampled on the ground,” Matias said. “I saw another video of people standing on top of the ambulance — just no regard for security, for the workers or anything. It was just a really poorly managed [event].”

However, this does not mean Scott is off the hook. Matias said Scott should be doing more to raise awareness to what happened at his festival.

“His apology after was so lackluster,” Matias said. “He didn’t really address [what happened] — like he mentioned it, sure, but so many people made memes about [Scott’s apology]. It’s all over Twitter and TikTok, and it was just like he was forced to do it from his manager. It’s like he truly didn’t really care.”

Scott said he will refund all tickets purchased to his ASTROWORLD festival as well as cover funeral costs for all the victims that passed away.

Despite this, Scott is receiving a lot of negative attention surrounding the event. However, Flowers does not think it will drastically impact his career.

“I think his fans are very loyal to him, so I don’t know if we’ll see his career necessarily go down the drain, but I think it’s definitely going to affect how people see him [as] I know for a while after the suicide bomber attacked the Ariana Grande concert in Manchester, a lot of people were kind of associating her with just that tragedy,” Flowers said. “I wouldn’t be surprised if something like this happened with Travis Scott as well.”

Corrales, Flowers and Matias all agree that this tragedy can be a valuable message to future concerts and festivals on how to prepare and manage for these types of scenarios.

“Hopefully, I think this will be a lesson to future concerts and festivals, and it will be kind of a wake-up call to event organizers to be like, ‘oh crap, this stuff can happen, and it does happen; we need to be more aware of these types of things and that they are possibilities,’” Flowers said.