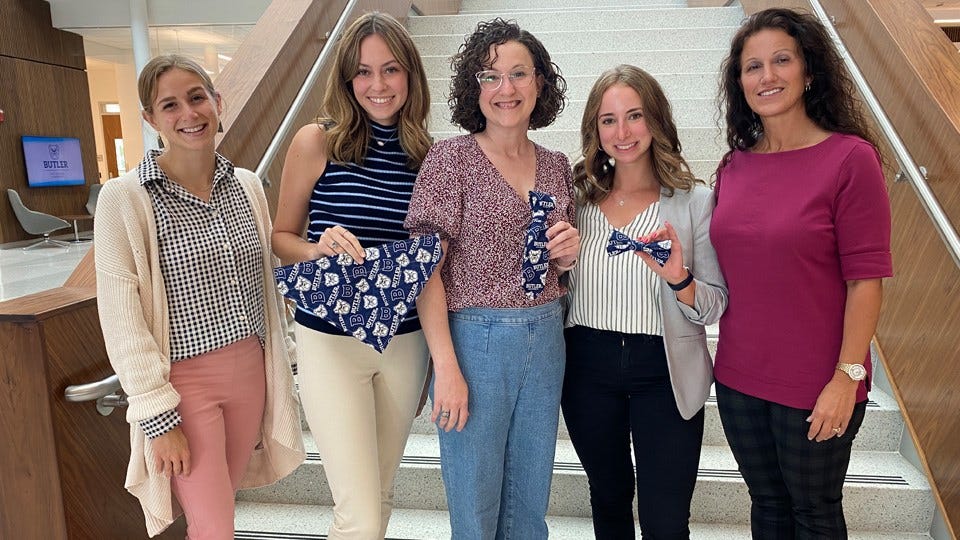 The Launch HOPE Foundation is giving women in marginalized communities a second chance by becoming entrepreneurs. Founded in 2019 by Butler management and marketing professor Kristi Mitchell, the nonprofit mentors and provides funding to women to start their own businesses. Kiki’s Collections, the first business to come from Launch HOPE, debuted their handmade dog and baby accessories on Etsy Oct. 20, 2021.

Mitchell said she and 13 Butler student interns of varying majors and years work to empower women to change the trajectory of their lives.

Launch HOPE currently operates their three-part program in the Hamilton County Jail and the Phalen Leadership Academies. In the jail, the program is used as an incentive and reward for good behavior, and jail staff choose who is admitted into the program. At Phalen Leadership Academies, a tuition-free charter school for grades seven through 12, women go through initial workshops and classes before they are allowed into the program.

Launch HOPE does not currently have an industrial center set up to manufacture products, so current participants go from the entrepreneurship center straight to the business accelerator.  As the second step of the program, Mitchell said she hopes to create a space within the next year with all three aspects under one roof, including the industrial center. Mitchell plans to primarily employ refugee participants to give them the chance to earn income and learn English before teaching them entrepreneurship skills.

Mitchell said she plans to open two more locations in the coming months, one of which will help refugees. Both the jail and Phalen Leadership Academies start with the entrepreneurship part of the program where business skills are taught, and ideas are vetted by Mitchell and the Butler interns. If participants’ ideas are viable, meaning that they are unique enough and have potential for profit, they move to the accelerator part of the program where business ideas are tested further and hopefully go to market. The jail currently has nine participants, and Phalen Leadership Academies has six.

Mitchell said she was inspired to start Launch HOPE after volunteering and teaching entrepreneurship classes at the Hope Center Indy. Mitchell said it struck her then that reentry to what society deems a “normal life” oftentimes is not exciting for women coming from backgrounds of different traumas. Entrepreneurship, on the other hand, gives women a sense of control, and “is one of those things that really anybody can do if you have the right mindset and access to some resources.”

Mitchell said that working hands-on with participants opened her eyes to how much of an impact entrepreneurship can have on women coming from difficult pasts.

“I saw this lightbulb go off with these women,” Mitchell said. “When I first got them … there was just a lot of self doubt. Once we got into the class and I was able to change a little bit of their mindset in terms of embracing the entrepreneurial spirit … That empowerment, and the control you get … it does a lot of good for the soul of a woman who has been through a lot of things.”

Created by former Hamilton County Jail inmate Kaitlin Vanderpool, Kiki’s Collections is the first business to come out of Launch HOPE. Vanderpool, who was released from jail while in the program, was able to get her products on the market within 62 days after being released. Since being free, Vanderpool goes to weekly meetings with Mitchell and the interns to further develop her business.

Junior marketing and finance double major, Ella Kappler, is one of three lead interns for Launch HOPE and said she has been inspired working with Vanderpool.

“[It] has been so cool to have her involved because that’s the biggest thing, we don’t just want to be doing the marketing and be doing the development, we want to help teach her to do that as well,” Kappler said. “It’s her business so we want to make sure that we are allowing her to really have that ownership … She’s been so grateful and appreciative, and has really emphasized like how much this has changed her life … The fact that we can be even a small part of that is just amazing to me.”

Interns are divided into three categories: marketing and communication, fundraising and grant writing and business support. Kappler, one of the two lead interns for the marketing and communication side of Launch HOPE, has interned with Mitchell for almost two years. Kappler said that the experience has developed her leadership abilities and has helped her stand out to employers.

Julia Denkmann, senior finance and Spanish double major and grant writing intern, said she has learned a lot through working with Launch HOPE. Denkmann, who wants to work with a nonprofit after graduation, said teaching participants business skills has cemented that goal for her.

“It’s not just us doing it, it’s actually informing and teaching people who don’t necessarily have a business background on how to go about starting up a business,” Denkmann said. “Seeing the work that I’m doing, that we’re all doing, impact a person is really cool, and you just feel really good about it.”

Mitchell and the interns are currently working to develop a business from Phalen Leadership Academies that will offer housing to special needs adults. The housing plans include ten units, each housing about four people.

Mitchell said she has been in the backseat to her interns who have taken charge of their roles and exceeded her expectations. Along with Mitchell, the entrepreneurs of Launch HOPE speak highly of the interns and their passion to serve.

“All the women we work with just rave about these students and how amazing they are,” Mitchell said. “I’m just so proud of the Butler students because they are absolutely amazing in not only their skill sets, but also their humanity blows me away … They really rally around these women, and I’m so proud of them for that because they are truly changing the trajectory and course of these women in a way that will be felt not only in their lives, but also in their families.”