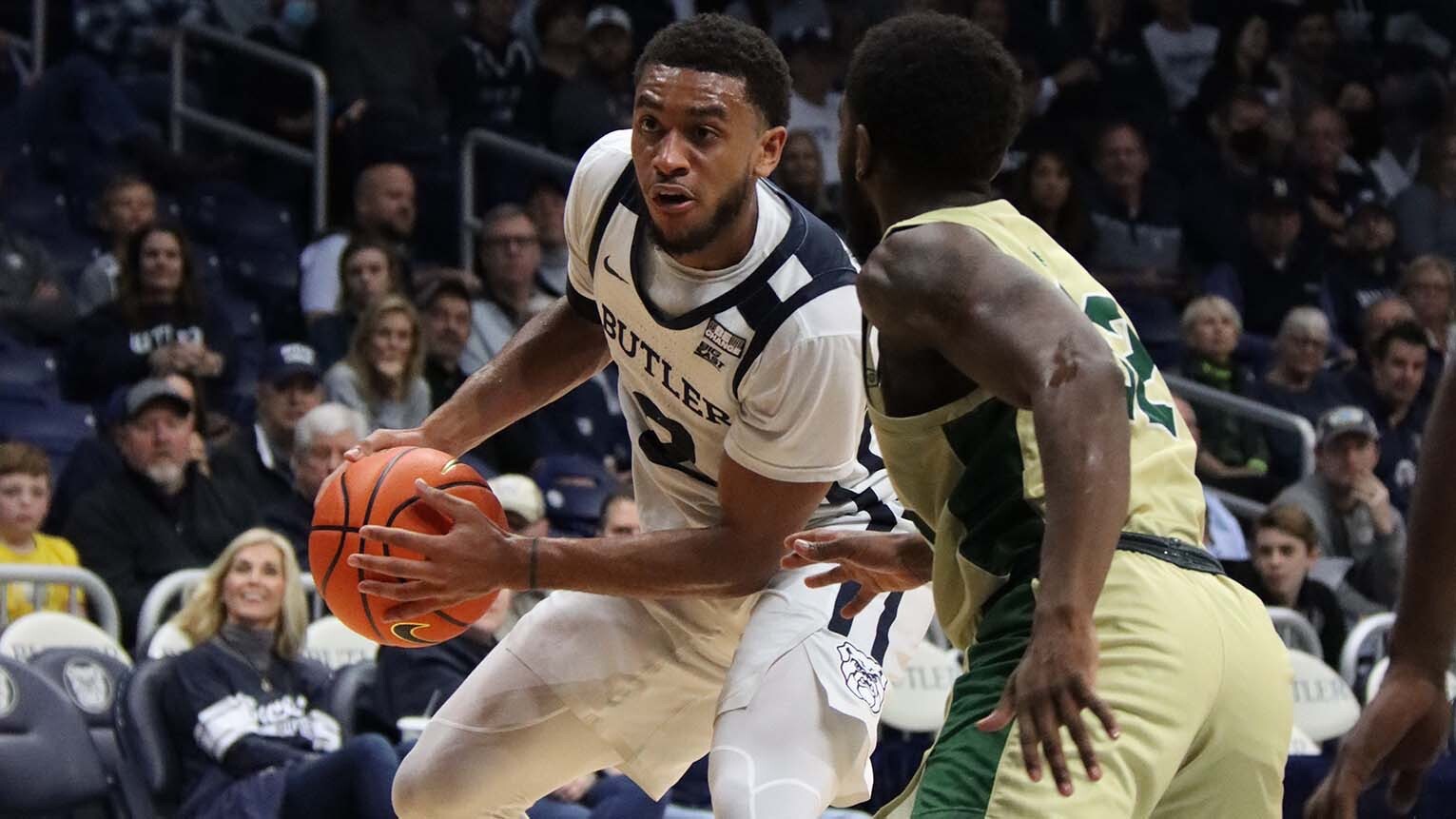 Aaron Thompson being guarded by a Tiffin defender in an exhibition matchup on Oct. 30. Thompson is suspended for the first three games of the regular season for violation of team rules and policy. Photo by Francie Wilson.

The Bulldogs showcased the reason behind their hype this season during their two exhibition games with wins over Tiffin, 94-84, and UIndy, 73-69.

Impressive early outings by veterans Bryce Nze and Chuck Harris solidify the team’s identity, while the arrival of freshman Jayden Taylor provides the much needed explosive playmaking the Dawgs were missing last season. The Dawgs will be using all the momentum they’ve been building this past year against IUPUI to take their first steps on the road to March Madness.

Here are some things to know ahead of the matchup:

Who: Butler vs. IUPUI

The Bulldogs have won their home opener the past 22 consecutive seasons dating back to 1999. Their last loss was by way of Missouri State, who won 72-57 at Hinkle Fieldhouse on Nov. 14, 1998.

The Bulldogs meet the Jaguars for the seventh matchup between the two programs. The Bulldogs dominate the series — winning all six of their previous matchups —  with their most recent win being 80-47 in the 2019-20 season opener at Hinkle.

This matchup against the Jaguars begins a four game home stand for the Dawgs to open the season before heading to the Maui Invitational on Nov. 22. Butler currently stands 59-1 over its last 60 non-conference home games.

The Bulldogs come into the 2021-22 season with the most experienced roster in the NCAA, returning 94.1% of minutes played from last season. Along with most of the roster returning, the Bulldogs add seasoned veterans in graduate transfer Ty Groce from Eastern Michigan and freshman Simas Lukosius who played professionally in Germany prior to coming to Butler.

Meanwhile, IUPUI returns just 32.5 % of the team’s scoring and 49.3 % of the team’s minutes from a season ago. The Jaguars return two starters and seven total members from last year’s squad, all while losing both their program’s all-time leader in rebounding Elyjah Goss and all-time leader in 3-pointers made Jaylen Minnett. Only one current member on their roster, Mike DePersia, played in the previous contest between these two teams in 2019.

The Jaguars are slated to finish last place in Horizon League according to the league’s preseason polls.

Key Dawgs will be absent to the start the season

The Bulldogs will be without a few key players on their roster to start the 2021-22 season.

Just hours prior to the game, the team announced that graduate student Aaron Thompson will be suspended for the first three games of the regular season for the violation of team rules and policy. Thompson will miss the season opener, as well as matchups against Central Arkansas on Nov. 12 and Troy on Nov. 13. Thompson will return to action against Michigan State on Nov. 17.

Redshirt senior guard Bo Hodges will miss the beginning of the season following a tibial plateau fracture in his left knee that he suffered in late August during fall practice. Meanwhile, sophomore guard Myles Tate continues to recover from an ACL injury he suffered in March and will also miss a portion of games to open the season.

Newly acquired graduate transfer Ty Groce is also ruled out for the game. Groce, who has been absent in both exhibition matchups for the Bulldogs, is nursing a knee injury. His timeline for his official debut with the Dawgs is currently uncertain.