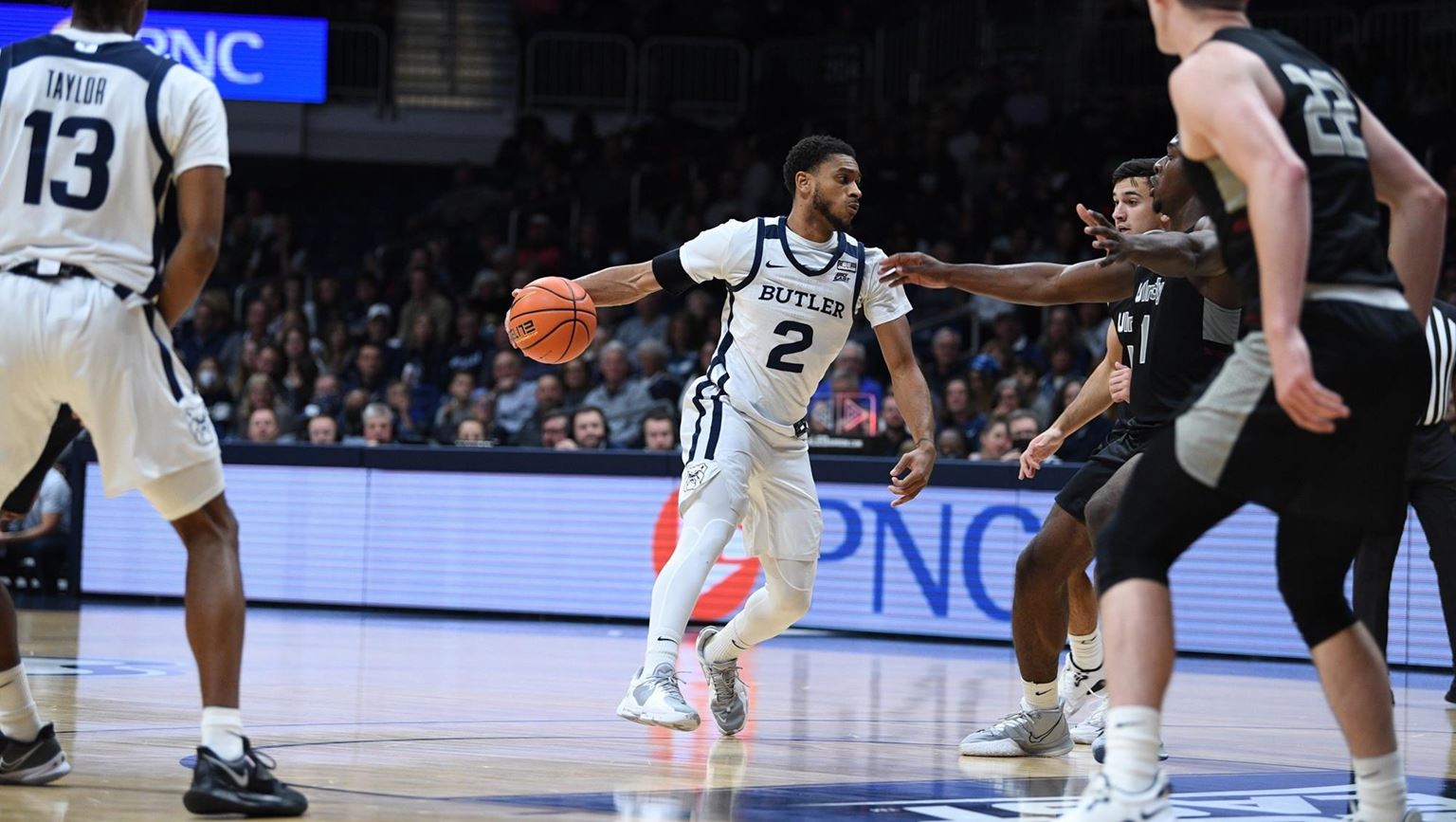 Guard Aaron Thompson dribbles the ball up the court in a matchup against the University of Indianapolis on Nov. 5. The Bulldogs defeated the IUPUI Jaguars in their regular season opener 56-47 on Tuesday. Photo by Francie Wilson.

Men’s soccer upset No. 24 St. John’s 1-0 in overtime on Wednesday, Nov. 3. Forward Hemi Nasser found the back of the net just five minutes into overtime to walk-off with a Bulldog win. Following the victory, the Bulldogs secured a spot inthe Big East Tournament and a rematch with the Red Storm in the quarterfinals.

Men’s soccer beat St. John’s on Saturday, Nov. 6 in a penalty shootout, 4-2, in the quarterfinals to advance to the semifinals of the Big East Tournament. Goalkeeper Gabriel Gjergji made five saves to earn his fifth shutout of the season. The Bulldogs will take on No.2 seed Providence on Thursday, Nov. 11 at 1:30 in Washington D.C.

No. 3 seed Butler women’s soccer was unable to overcome No. 2 Georgetown in the Big East Tournament      semifinals. The Hoyas scored twice early in the second half of the match and the Bulldogs responded scoring once in the second half. Butler had a missed opportunity two minutes later, unable to make a goal that would have tied the game and ultimately fell  2-1. The Bulldogs concluded their regular season 15-4-1, finishing third in the Big East. Although the Bulldogs did not make it all the way in the Big East Tournament, they did punch a ticket to the NCAA tournament and will take on the Wisconsin Badgers in the first round on Friday, Nov. 12.

Women’s basketball defeated Trine in an exhibition game 68-61 on Thursday, Nov. 4. The Bulldogs forced 19  turnovers and came out on the top in points in the paint. Emilia Sexton and Genesis Parker led Butler in points, both ending the game in double figures. They will take on No. 8 Indiana on Wednesday, Nov. 10 for the first game of the regular season.

Women’s volleyball had two matches this week. They took on Providence on Friday, Nov. 5, and swept them in three sets. Butler outhit Providence by over 200 points and outside hitter Brittany Robinson put up 11 points on 10 kills and had two block assists.

Women’s volleyball fell 1-3 in four sets to No. 24 Creighton on Sunday, Nov. 7. Butler is now tied for fourth in the Big East with DePaul. Creighton outhit Butler .183 to .085 and the Bulldogs will return home for two Big East matchups with DePaul on Friday and Marquette on Sunday.

Men’s basketball defeated the University of Indianapolis 73-68 in their last exhibition game on Friday, Nov. 6. Sophomore guard Chuck Harris scored 20 points and forward Bryce Nze had a double-double, putting up 15 points and 11 rebounds. The Bulldogs had 14 assists, five turnovers and shot 53% from the field.

On Tuesday, Nov. 9 the Bulldogs defeated the IUPUI Jaguars 56-47 in their season opener, marking 23 straight seasons the Dawgs have won their home opener. Harris led the team with 16 points, followed by freshman guard Jayden Taylor with 12 points. Nze and freshman guard Simas Lukosius each had seven rebounds. The Bulldogs shot poorly from the field, only hitting a mere 34.1% of their attempts. The Bulldogs next matchup is against Central Arkansas on Nov. 12 at 6:30 p.m.

Women’s swimming lost to the University of Indianapolis 226-81 and to the University of Findlay 202-86. Cami McGrady was named the “Swimmer of the Meet” by Butler’s coach Maurice Stewart as she had a season-best time in the 200 Free and competed at a high level for the Bulldogs in the 100 Fly, 100 Breast, and the 400 Relay. Alani-Hightower-Bend placed second overall in the 200 Back with a time of 2:08.41 — it was her first time competing in this event and she posted a huge qualifying time.