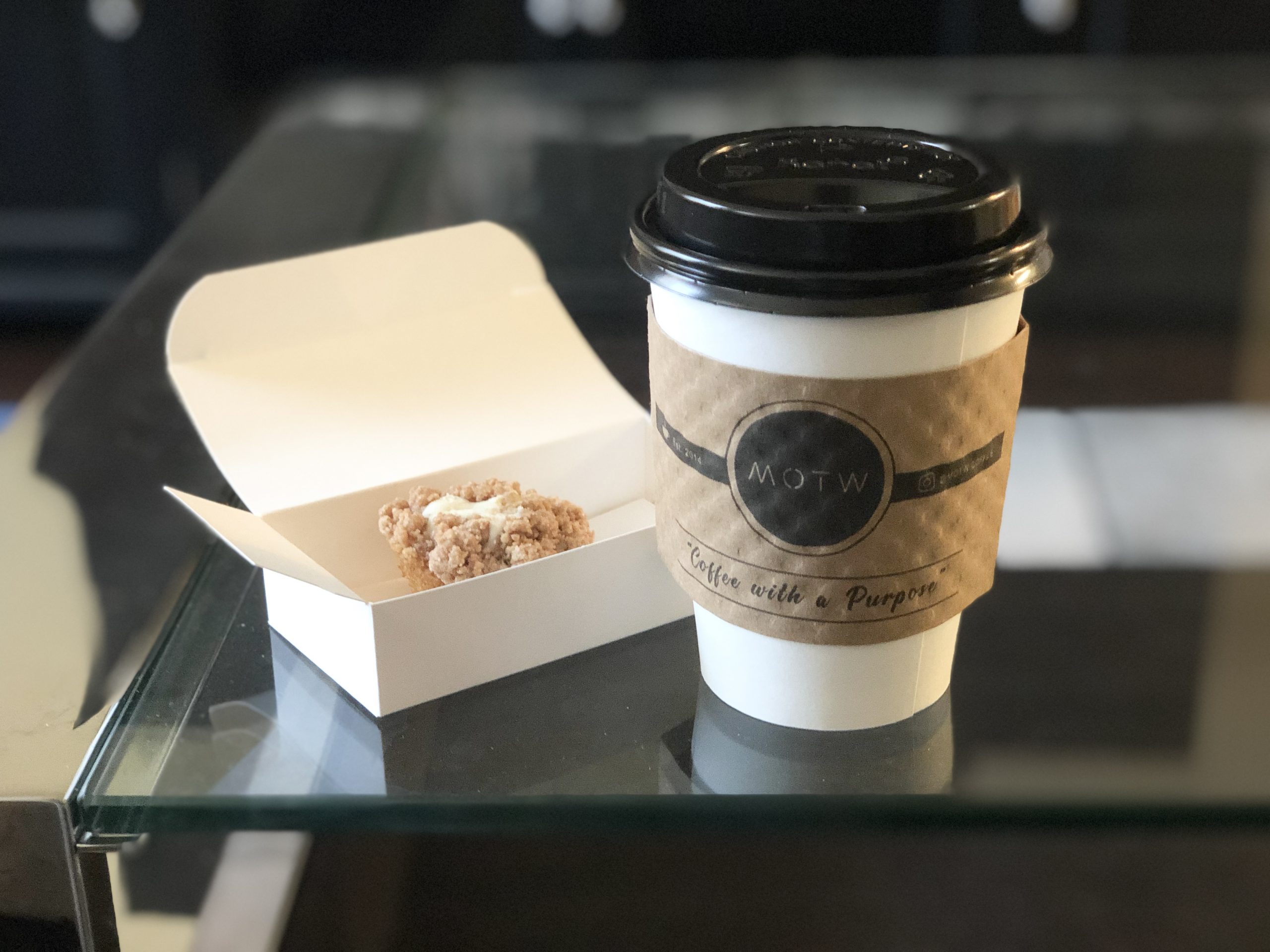 Picture of the yemeni chai and pumpkin pie pastry from MOTW Coffee and Pastries. Photo by Kiran Brar.

MOTW Coffee and Pastries has a rich history of how it came to be, which is why I felt enticed to review this coffee shop. Indiana native, Butler alum and MOTW co-owner Sajjad Shah created an Instagram account called Muslims of the World in his 20s to share stories that resonated and connected with people. The account now has nearly 650K followers. Because of how successful Shah’s efforts were, he decided to create a physical space in the form of a coffee shop for people of all backgrounds to connect.

MOTW Coffee is located on 38th Street — just 10 minutes from Butler’s campus. The coffee shop is located in Georgetown Plaza and is surrounded by a diverse variety of ethnic restaurants and grocery stores.

Walking into the shop, I noticed that there were ample amounts of seating, and the decor was eye-catching. The walls had colorful artwork, and there were also bits of Islamic architecture represented in the form of radiant patterns. Along with tables and booths for people to enjoy their orders, there was a small stage against a faux-grass wall with a couple of chairs for people to sit at. I originally thought that this area was for people to take cute pictures, but I came to find out after my visit that the stage is used for events that MOTW hosts, such as informative discussions with Marion County officials and entertainment performances.

MOTW offers a variety of coffee, lattes and smoothies. I also had a lot of French and Middle Eastern inspired pastries to choose from, but I opted for a yemeni chai and pumpkin pie pastry. I am a big fan of chai, so I wanted to give that a try. After getting a run down of all the different pastries from an employee, I chose the fall-inspired treat because ‘tis the season. It was difficult for me to choose just one pastry because they all sounded so good, but I wanted to fit the fall vibes with the pumpkin pie treat.

As I waited for my drink to be made, I noticed a wall full of pictures that caught my eye. The framed pictures had text underneath them, which and the  explained the MOTW team’s humanitarian efforts of traveling to different parts of the world —mostly Middle Eastern countries — to raise money and provide support.

My yemeni chai and pastry was brought out shortly after reading the frames, so I didn’t hesitate to try the warm drink and fall treat. To say the least, I was in love with this coffee shop after my first taste.

The yemeni chai was extremely good. It tasted just like my mom’s chai, and I might be biased, but I think she makes the best chai in the world. I could taste a hint of cardamom in it, which really elevated the flavor. I normally hesitate to get chai from coffee shops because it usually tastes too sweet, but the yemeni chai at MOTW had the perfect amount of sweetness and spices added to it.

The pumpkin pie bite was also a great decision. The base was fluffy and had an amazing pumpkin flavor. Not only that, it had a coffee crumble topping that added a great flavor and texture to the pastry. I am so glad that I paired that with the yemeni chai.

Not only was my order delicious, but I really like that MOTW takes one step forward to organize different events to engage the Indianapolis community, such as discussions, trips to different countries and other efforts to raise money and awareness. Some of their most recent efforts include a 5k marathon for the crisis in Syria, creating care packages for Afghan refugees and cycling for the crisis in Yemen. I did not mind that my order was a little pricier than the average coffee shop because I knew that my money was going to a great cause. Next time I am missing the taste of my mom’s chai or I just want to go somewhere other than Starbucks to do homework, I know exactly where I want to go.