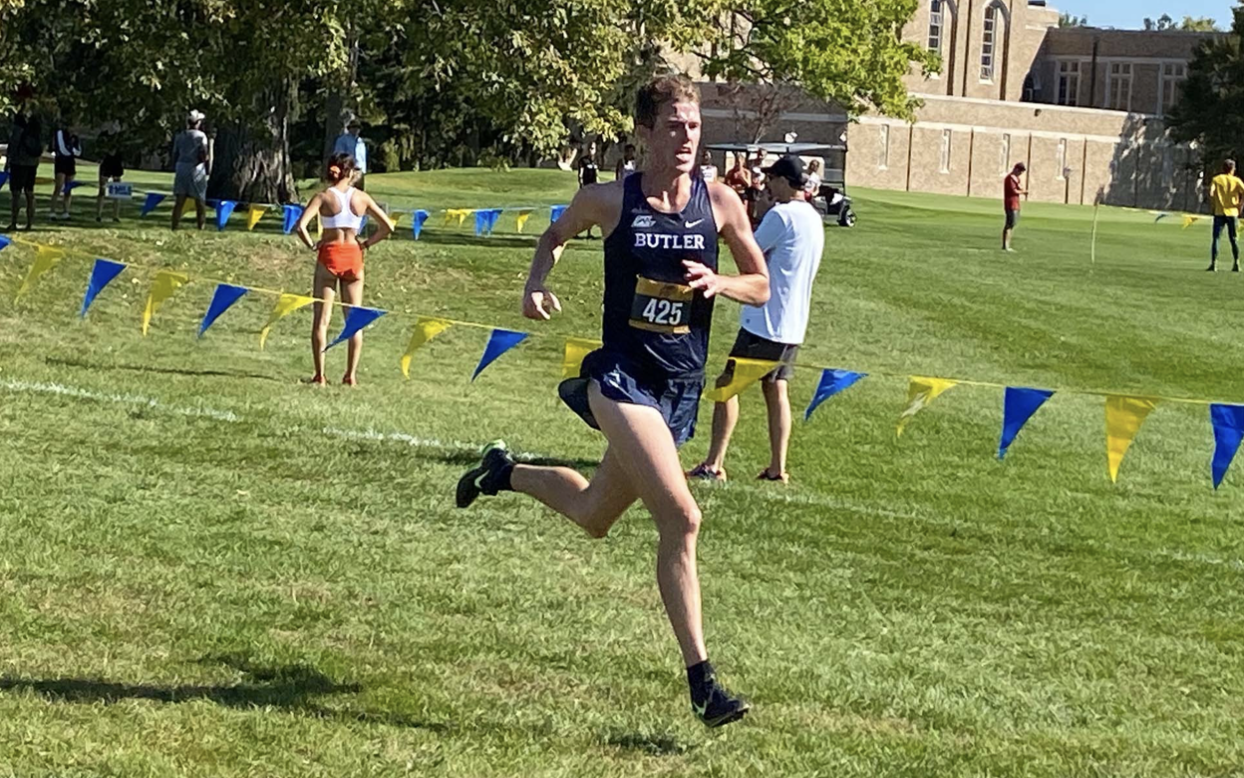 Butler men’s cross country runner Barry Keane on the final stretch of the 8K at the Joe Piane Invitational on Oct. 1. Photo courtesy of Mary Polak.

The Butler cross country team traveled up US-31 on Oct. 1 to South Bend for one of the top national meets of the regular season at the Joe Piane Invitational. Both the men and women competed in the elite “Blue” races, each was loaded with 10 of the top 30 teams according to the USTFCCCA national poll.

The No. 10-ranked Butler men’s cross country team for the 8K race was led by redshirt senior Barry Keane in his season debut — finishing 10th overall in 23:41.7. Redshirt senior Clark Otte followed not too far behind in 30th with a time of 24:07.5.

Next across the line were graduate students Pierre-Louis Debourte and Simon Bedard at 32nd in 24:11.1 and 39th in 24:17.2 — who also made their fall debuts. The Bulldog’s fifth runner redshirt sophomore James Sweeney finished in 66th place overall in 24:42.5.

The men’s team finished third place with a total score of 177 behind No. 19 Furman and No. 25 Michigan.

After back-to-back titles at the previous meets to open the season — Butler Twilight and IUPUI Jaguar Classic — the women’s team faced off on the 5K course in a 25-team field also stacked with a number of top teams.

First across the line for the Bulldogs was redshirt senior Angelina Ellis in 30th at 16:50.1. Redshirt junior Mia Bechkam finished behind her in 44th with a time of 16:57:8.

Crossing the line next were graduate student Kami Hankins and freshman Quinn Shanahan at 73rd and 76th in ​​17:17.5 and 17:18.3. Finishing as Butler’s fifth runner was redshirt junior Maddie McLain in 105th at 17:30.1, respectively.

The Bulldog women placed 11th as a team in the elite meet. No. 1 North Carolina State took home the title followed by No. 3 New Mexico and No. 6 Alabama.

The Butler cross country team returns to action on Oct. 15 at the Nuttycombe Invitational in Madison, Wisconsin.