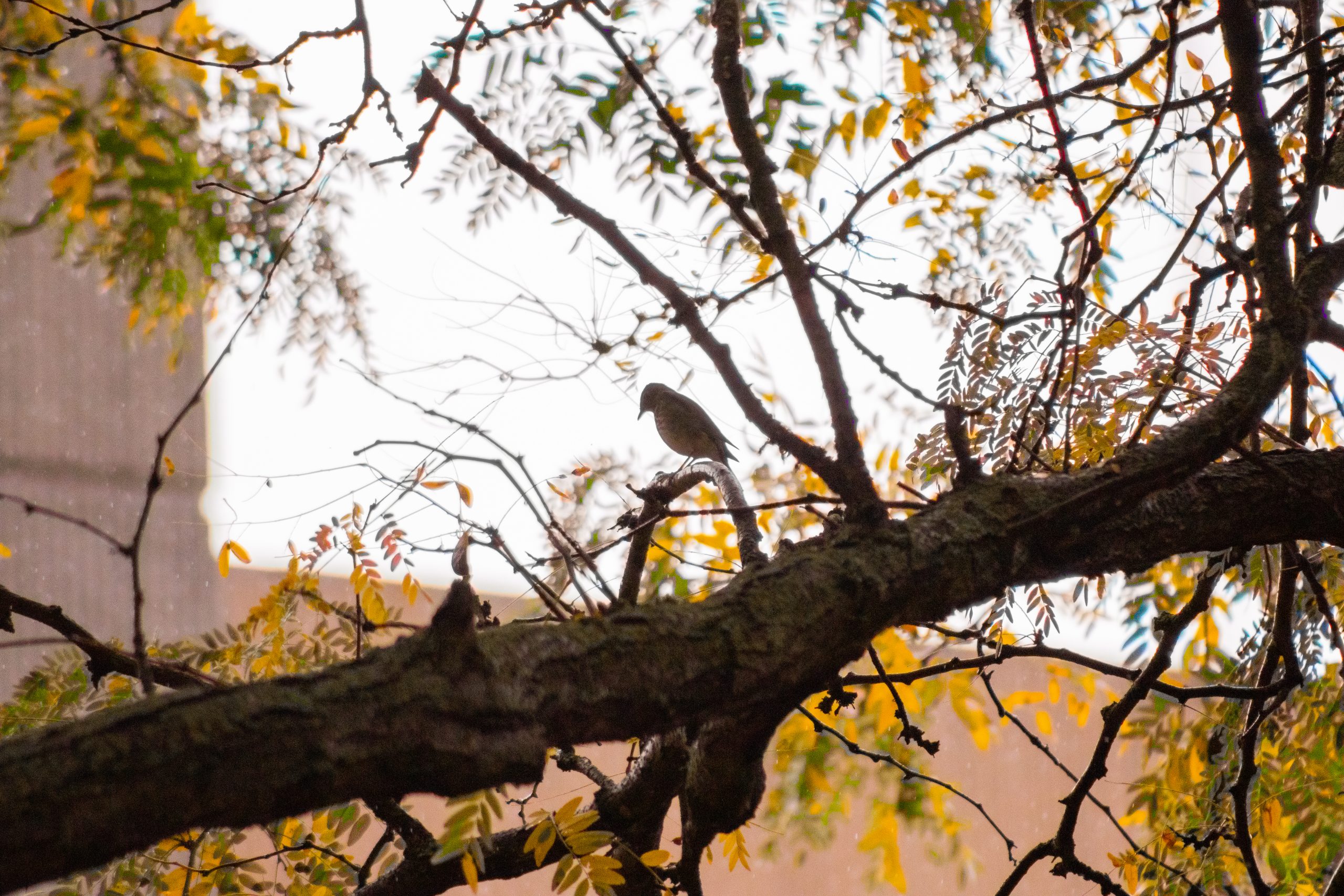 A bird sits atop a tree next to Gallahue Hall on Butler’s campus. Dead birds have been spotted around the area after flying into the windows of the building. Photo by Ben Caylor.

Butler’s campus sits right in the middle of one of the country’s largest bird migratory paths. Birds fly through the campus from Canada towards South America every fall and make the return trip in the spring. However, it seems many of these birds never complete the journey across campus.

Students and professors alike have been noticing the bodies of dead birds scattered around campus this semester. Senior biology major, Anushay Ansari, said she believes it is a big problem at Butler and that many students share that same belief. She said that most of the dead birds she has seen were around the two skywalks on campus.

This theory was backed up by Dr. Shelly Etnier, a professor of biological studies, and Dr. Julia Angstmann, the director of the Center for Urban Ecology and Sustainability, CUES.

Etnier said the deaths occur when birds collide with the large windows on campus. She said that because when windows create reflections, the birds don’t realize that there is a window in front of them. Ansari added that she believes so many birds hit the Jordan skywalk because they can see through to the other side.

Etnier has been studying the deaths of birds on campus for years. She runs a program called Butler Explores Avian Collisions, BEAK, which researches these birds and how we can prevent their deaths. From 2015 through 2019, Etnier and other members of BEAK walked routes mainly around Jordan, Gallahue and Holcomb collecting specimens for research. She said that in 2019 they found 74 dead birds in just the surveyed area and that nearly 50% of them were killed from collisions with the Jordan and Pharmacy skywalks.

Etnier said they would walk their routes during the spring and fall migratory seasons because those are the times that the bird casualties are most common. This is because the birds flying through campus don’t know their surroundings and don’t know the difference between open air and windows.

Butler has made some adjustments to try to eliminate the high number of bird casualties on campus, including bird-friendly glass on the new Holcomb Building. Angstmann said that the glass has small dots on the outer surface of the windows which help ward off birds.

“They don’t obscure our view,” Angstmann said. “But they help to minimize glare and reflection for birds.”

She said that without the glare, birds should be able to recognize the windows and avoid them.

Etnier and Angstmann both hope that the university will eventually implement this glass onto the skywalks as well. Until that happens, however, Angstmann said she hopes the school will look into cheaper alternatives. Angstmann said some options include putting wires or cables over the glass to obscure the birds’ ability to see through the glass. Etnier said they could also put small decals on the skywalks to ward off incoming birds.

BEAK has not been able to survey the walking route around the skywalks since 2019 because of the construction on Holcomb and Gallahue. Etnier said that she will be able to start surveying the area again when the construction to Gallahue, which is scheduled to be finished before the 2023 spring semester, is completed. Etnier and Angstmann both said they are excited to start researching again at that point and are hoping to see a large downtick in bird deaths as a result of Holcomb’s new bird-friendly glass.

With the current and future bird-friendly precautions being taken by the university, there is hope that many more birds will be able to safely navigate the campus and complete their migratory journeys.