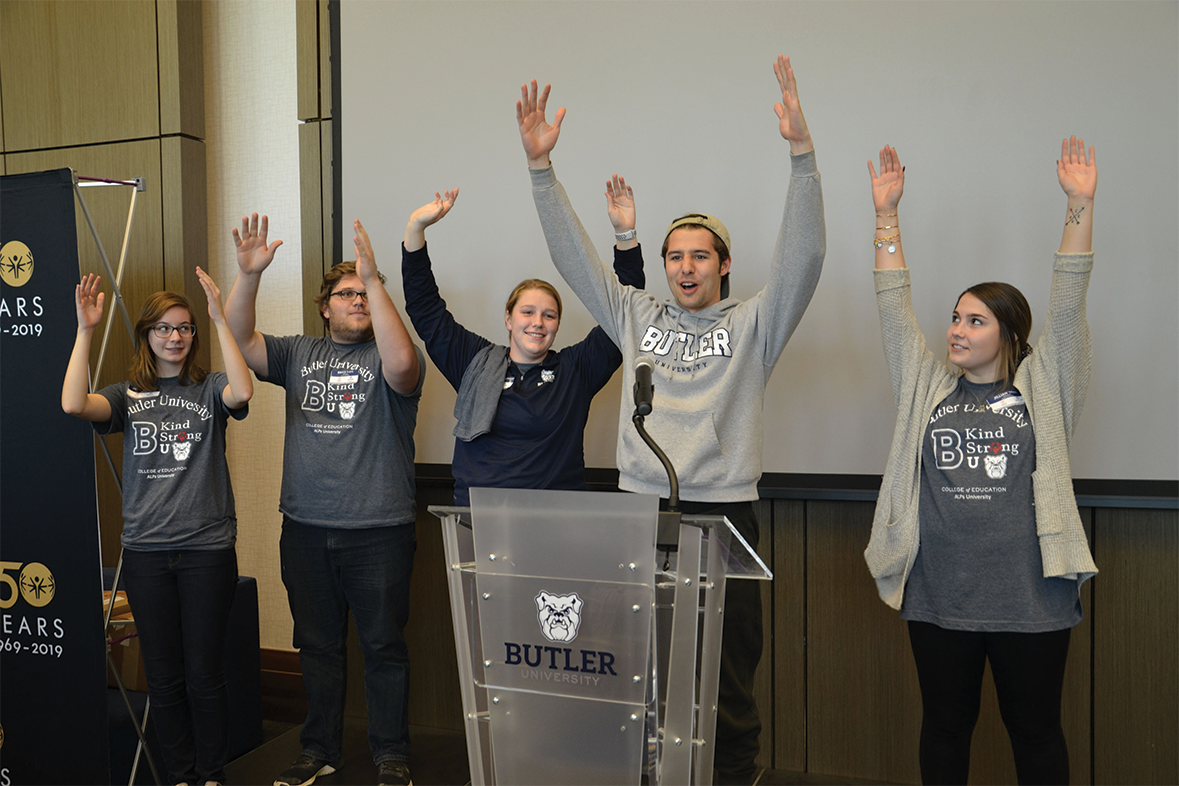 This year’s Athlete Leadership University, ALU, brought by Special Olympics Indiana will be held on Saturday, Oct. 2 and Sunday, Oct. 3 at South Campus. The ALU is a way for Special Olympic athletes to come to a college campus and gain leadership skills.

All students, not only those in the College of Education who help run ALU, can volunteer for this event and socialize with Special Olympic athletes. Volunteers will help athletes navigate campus and work on their specific projects.

Erin Garriott, professor of education, explained that the event is for Special Olympic athletes who are not students at Butler. Garriott said, while she is the liaison between Butler and Special Olympics, every one of her students in Education 242, a class on foundations of special education, will be a part of organizing it. These students help facilitate classroom activities, lead small groups and run technological aspects.

“It’s a typical workshop,” Garriott said. “All the athletes have intellectual disabilities and they’ve signed up for a path of some courses that they will take … [They] register and then they go to a classroom and they work on their classwork and learn how to be a leader in whatever area they’ve chosen.”

Garriott explained that there are many areas of coursework that can lead to certification such as public speaking and organizing. The athletes collaborate on projects with education students to work towards earning their certificates. Athletes can earn these certificates after attending multiple ALUs, Garriott said.

The soccer tailgate on Sunday will give the athletes time to socialize with fellow athletes and Butler students alike. The tailgate is a time to relax, talk and share food with one another, according to Garriott.

One thing Garriott talked about was her passion for working with people who have disabilities. Butler’s campus is lacking in diversity when it comes to students with intellectual disabilities, Garriott said.

“We thought [ALU] was a good opportunity to try to figure out a way to make our campus more inclusive of a group that hadn’t been here,” Garriott said. “So intellectual disability means that there’s some cognitive challenges — maybe a low IQ or lower academic achievement.”

ALU is a way for Special Olympic athletes to be immersed in a college atmosphere while learning leadership skills, Garriott said.

“Typically we’re in the middle of campus, and that’s really intentional,” Garriott said. “We want students to wonder what’s going on, and I’m hopeful that having more experiences and time seeing people with intellectual disabilities on our campus kind of lightens that question of what’s happening.”

The last time ALU was at Butler was before the COVID-19 pandemic. This year, it falls on the same weekend as Family Weekend, so it will be hosted at South Campus instead of the mall at the center of Butler. Junior elementary education major, Abby Carpenter, said this change of location does not change the level of inclusivity and immersion these athletes will get to experience.

Carpenter said she hopes the athletes leave ALU with a sense of empowerment.

“I really like that … Butler’s specifically hosting this because I feel that higher education can be an isolated experience for individuals with disabilities,” Carpenter said. “I think just welcoming the athletes as guests is really important to acknowledge that there are people in the Indianapolis community … who aren’t on the same career path as we are, and that’s totally okay and we can still celebrate that.”

Carpenter also discussed why the ALU means so much to her and the way it can help people recognize experiences beyond Butler’s campus. She talked about how important it is to go in with an open mind and be okay with making mistakes because, no matter what, you’re learning something new.

“I think it’s kind of hard to see [differences in experience] when you are with so many like-minded people on a day-to-day basis when you’re at college,” Carpenter said. “And it’s hard to see the impact that everyone else has on the world instead of just your own.”

Jillian Moss, associate dean of the ALU and 2020 Butler graduate, spoke to how she originally got involved with ALU. Working with ALU as a student at Butler, and now on the organization side of things, Moss said getting to work with the athletes is what keeps her coming back. She said how she often feels people with intellectual disabilities are pushed to the side.

“This is an event where that’s just not the case,” Moss said. ”And I think there’s just a lot of value in what [ALU organizers] do and what Butler students do.”

Inclusivity is very important to Moss, and she said that inclusion is the heart of ALU.

“I think this is an event where you can really see [inclusion] prosper between … everybody from Special Olympics [and] Butler students,” Moss said. “Being able to get that experience — we always say it’s something you don’t understand until you do it, and then you get hooked. Special Olympics is one of those things where you just get hooked the minute that you become involved.”

Sign-ups for this fall are still open, but only a few spots are remaining. If you are looking to get involved with Special Olympics Indiana, ALU does happen again in the spring. Reach out to Erin Garriott if you’re interested.

Carpenter said going in with a positive attitude is all anyone needs to get started, and she believes everyone can benefit from interacting with the athletes.

“I have never met people who are more enthusiastic and driven and kind hearted,” Carpenter said. “I would just love for everyone else to live their lives with the same amount of energy that [the athletes] do.”