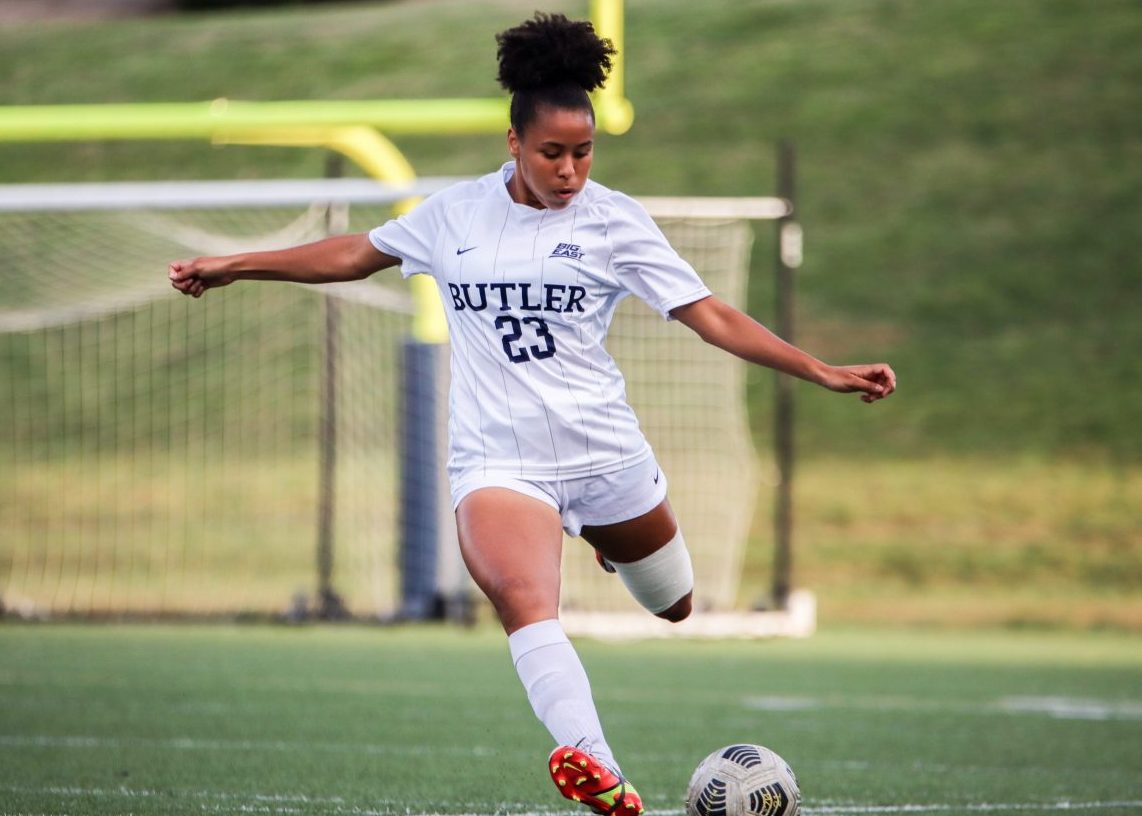 Junior midfielder Aliya Diagne kicks the ball downfield during a matchup against the IUPUI Jaguars on Sept. 2. Photo by Grace Denckhoff.

Co-head coach Rob Alman explained what the loss to Georgetown last spring meant to the team.

“I don’t think they need much extra motivation from us to be honest,” Alman said. “Whenever you lose a game in overtime like that, it’s just a sudden end, and there’s no opportunity to respond.”

Senior midfielder Morgan Kloosterman agreed with Alman, adding they are more motivated by winning a title than winning individual awards.

“The team [is] always looking to up their game, both individually and as a team,” Kloosterman said.

The Bulldogs are extremely motivated for the season, and have already put the loss last spring behind them. The team has also made it clear that a conference title is far from the only thing they are chasing. Simply playing as a team — playing as one — is another goal they have for the season.

The non-conference slate is already underway for the Bulldogs, and the team is off to a hot start with a 4-1 record. Despite opening with a 5-0 loss to Michigan, the Bulldogs have rallied to win four straight games. This includes two consecutive Big Ten opponents in Northwestern and Illinois, as well as a solid 2-1 victory over Utah and a 1-0 win against IUPUI.

This fall, Butler will host Seton Hall, UConn, Providence, DePaul, and Creighton at the Sellick Bowl. DePaul has been a very stable program in the Big East for many years — so the Oct. 17 matchup versus the Blue Demons is likely to be circled in red for the Dawgs.

When asked about what game he was most anticipating, Alman’s response was simple.

“The next game,” Alman said. “It sounds cliché but this group has become so good through the years of not doing anything but being focused on the next game.”

As Alman said, it has become something the Dawgs have followed for some time, and it is clear that it is benefiting the team greatly.

Up next on the schedule for the Dawgs will be a matchup against Wright State on Thursday, Sept. 9 in Dayton, Ohio.