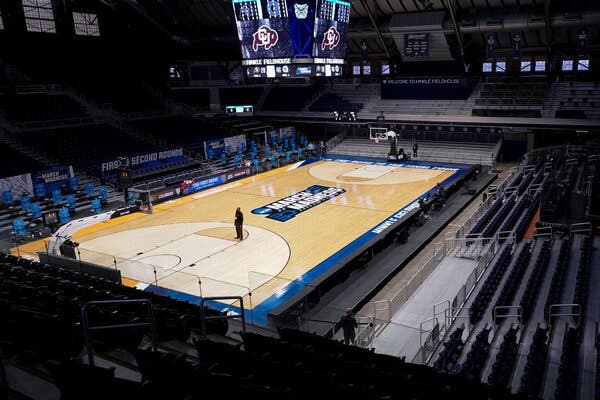 Butler students have the opportunity to produce social media content for the NCAA. Photo courtesy of the New York Times.

With the start of the NCAA March Madness tournament in Indianapolis, Butler has been in full swing to prepare for its part in hosting the event. While Hinkle Fieldhouse has been chosen to host games, Butler students have also gotten involved with the NCAA, which has officially partnered with sports media students to maintain the March Madness social media throughout the tournament.

Students in journalism professor Lee Farquhar’s Sports Newsroom class have been tasked with creating video clips and content for the NCAA’s social media accounts while the tournament is played in Indianapolis. While the partnership between Butler and the NCAA is first of its kind, it seemed like a logical connection to Farquhar.

“We reached out to [the NCAA] right away after they announced that Indianapolis was in talks. We reached out and said ‘hey, we’re here to help,’” Farquhar said. “Butler has a strong relationship with the NCAA with our alumni working there.”

The important aspect of the class to Farquhar is the student impact. In a normal year, the class does individual projects like sports articles, podcasts and other videos, but due the change created by the new partnership, students have had to be creative and adapt this semester. John Flannery, a senior sports media major, seemed to enjoy the new change to the class by bringing up how this year’s class is bringing quality experience he can use later in his career.

“I’ve been able to learn a lot and really apply skills that I’ve learned in the first three years of college to this class and it really made a difference and produced quality content, not only for the NCAA but for my internship that I may be doing,” Flannery said.

For sports media majors, the class is a requirement, but this year the class’ role on the national stage has added a critical layer to students’ learning and ability to think on their feet. Students like Madi Roberts, a senior sports media major, have learned to adapt when their assignments are not clear.

“We had to go in and kind of do like a venue piece hyping up each place, which was a little hard for my group because we couldn’t get anyone from Bankers’ Life to actually send us film from the inside,” Roberts said.

Despite the hiccups, Roberts said the experience has been beneficial, as she has gotten to see how different organizations in the sports world work.

Even though the class is required, some students are taking the class strictly for the experience, and are not even registered to receive course credit. Emma Bronsteader, a sophomore sports media and creative media and entertainment double major, and many other students were brought on by Professor Farquhar just to help produce content, as the class did not have enough students for what the NCAA wanted.

“So, ever since they announced that the entire March Madness was going to be here, I immediately was like ‘I have to do something,’” Bronsteader said. “It’s that exposure to the kind of industry that I want to get into, and people have been posting it and reposting it and I put it on my LinkedIn, so it’s definitely something that I want to follow me in the future.”

Those same videos Bronsteader, Roberts, and many others have worked on have garnered thousands of views and have been seen from all over the country on the NCAA March Madness social media accounts.

While the plan is to continue to produce and create content for the duration of the tournament, students in the Sports Newsroom class will go back to creating media and podcasts again after the tournament final is over, Farquhar said.

Even though the NCAA tournament has yet to be announced for next year, the hope that both Farquhar and students have is that Butler will be able to partner with them again in some capacity.

“I’m hoping to continue this type of relationship with the NCAA, even when March Madness isn’t hosted entirely in Indy — they run championships all year long, and there’s a need for social and digital content,” Farquhar said.

The NCAA tournament lasts from March 18 to April 5 and will be held entirely in the state of Indiana in sites including Butler’s Hinkle Fieldhouse, Lucas Oil Stadium, Bankers life Fieldhouse, Mackey Arena, Simon Skjodt Assembly Hall and Indiana Farmers Coliseum.