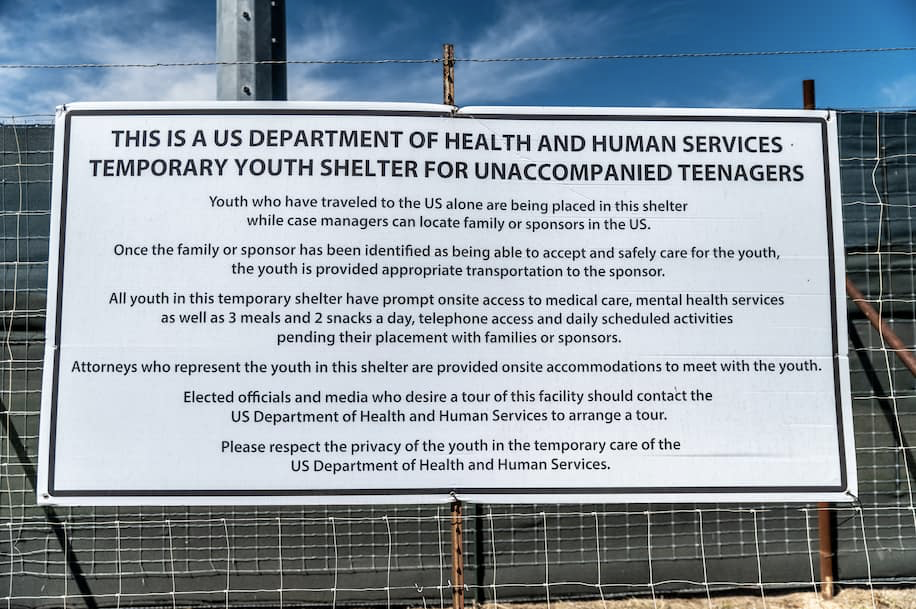 A sign posted outside of the new youth detention center in Texas. Photo courtesy of The Washington Post.

Every four years, presidential candidates in the general election spend a majority of their final months making promises for their “first 100 days.” The evaluation of these 100 days is based on the immense productivity of Franklin D. Roosevelt’s administration to combat the effects of the Great Depression in his first days in office. Despite this being an arbitrary amount of time in which not much can actually be accomplished, voters hold onto these promises, and use them not only to choose a candidate, but to evaluate their leader’s performance.

Cut to 2021, a little over a month into the Biden presidency, as the public is attempting to evaluate Biden’s efficacy based on his ability to fulfill those “first 100 days” promises. Perhaps his most unachievable promise was his guarantee to deport zero immigrants in his first months in office.

Manuel Alarcon Nava, a sophomore multilingual studies major, said the number of deported immigrants is just an estimation made by immigration-focused organizations; the real number of deportations is likely much higher. Alacron Nava also highlighted that Black immigrants have been specifically targeted by Biden-era deportations, most recently to Jamaica.

The moratorium, or temporary legal suspension, on deportations was struck down by a federal judge in Texas. The ruling — while annulling the first 100 days promise — did not require the administration to immediately schedule deportations on such a massive scale. It is unclear whether or not the Biden administration will seek an appeal to reverse the judge’s decision. Nevertheless, Biden’s team announced they will continue to push forward with additional immigration reform.

Not only has Biden’s administration deported thousands, it is also partially doing so by using a Trump-era policy that allows migrants to be turned away at the border due to COVID-19 concerns. The Biden administration has also built a new detention center in Texas to accommodate the overflow of unaccompanied children, which stems from COVID-19 protocol and reduced capacities in other centers.

Nicholas Gomez, a junior history and political science double major, said he was not surprised that Biden did not follow through.

“I think this is just a symptom of a bigger problem in the sense that [career politicians] are going to make a lot of promises that they can’t really keep especially once they get in office,” Gomez said.

In an attempt to recover from the divisiveness of Trump’s presidency, the Biden campaign consistently ran on a platform of “restoring unity” and enabling the American people to trust the morality of their leaders. These are moot talking points if Biden plans to operate as an average American politician and make unreasonable promises. Stopping all deportations demands an immediate cessation of certain policies and readjustment of immigration protocols for ICE, as well as agencies within the Department of Homeland Security. Such drastic change simply is not exclusively within the power of the President to actually put into effect.

ICE has not even adhered to the direction that the President has been able to put in place. Biden has attempted to limit deportations to those who pose a threat or have crossed the border most recently, but this official order did not go into effect until Feb. 1. ICE rushed to deport as many immigrants as possible before the deadline, clearly going against the President’s wishes. The Biden administration is also faced with a vast history of deportation policies and practices, which cannot be undone in a matter of days.

Anna Watson, a junior environmental studies major, said it is difficult for presidents to follow through on every one of their promises because of the nature of American government.

“We live in a slower moving government, especially nowadays with a lot of partisan problems and parties blocking legislation from each other,” Watson said.

If we are to be a “city on a hill” and the beacon of freedom that America has always been touted as, immigration of all kinds should be encouraged. No one should ever be deported unless convicted of a crime, and then through fair judicial proceedings.

Of course, it’s not logical to assume that the United States could function without any documentation of who is living within its borders. Having an accurate idea of who resides in the U.S. and what their needs are will help keep the country running effectively through taxation, governmental representation and the like. However, becoming a US citizen is currently a long and difficult process. One of Biden’s campaign promises on immigration was an easier path to citizenship, so that will be another key aspect of evaluating his efficacy.

Every human being should, as a natural right, be able to move when they feel they are in danger or that their life would be better off somewhere else. Not to mention that the United States has directly contributed to creating systems of exploitation in places like Latin America — systems that exploit cheap labor and expand income inequality globally.

Biden made a promise he would never have been able to keep. I believe that he will push for more progressive immigration policy than what existed under Trump — albeit an easy accomplishment —  but his office simply does not have the capability to end deportations all together.

While certainly the American immigration system needs to be overhauled, starting with ICE, a true evaluation of President Biden’s progress on these issues will have to occur later on in his term. This is not an issue to be solved in the first 100 days.