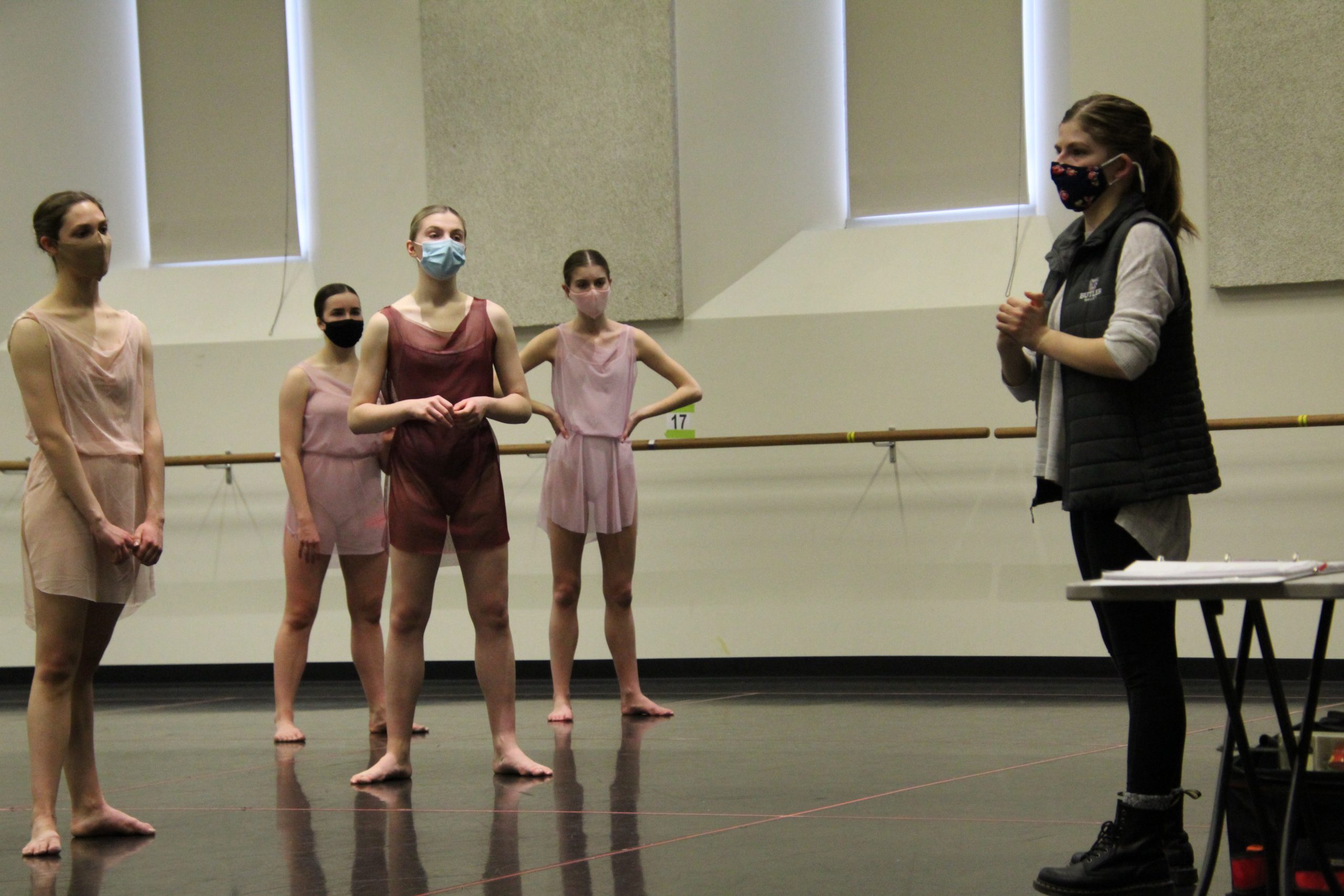 Butler Ballet seniors describe their Senior Choreographers’ Showcase pieces, and the challenges they faced while choreographing. Photo by Claire Runkel.

The Butler Ballet Senior Choreographers’ Showcase will be performed at Clowes Memorial Hall on March 5. The showcase will feature five separate pieces, each with a 12-minute runtime. The entire showcase is choreographed by five seniors in the Butler Ballet program, and each brings a separate take on what they have learned throughout their academic careers.

The showcase is also a culmination of the student’s hard work in their Choreography III class. The entire class centers around the students designing a piece of their choice, complete with their own choreography, costume design choices, compositions and more. The senior showcase is broken down into five main pieces, each choreographed by a different student.

“Firmament,” choreographed by senior dance pedagogy major Jacob Shoup, means the separation between the sky and the sea. The piece will explore the concept of how the sky relates to the earth. Shoup said his piece elaborates on the idea of constellations.

“Humans impose stories on [the constellations], like how those stories develop from just points in the sky,” Shoup said. “So I tried to capture the impression of constellations through movement.”

One problem Shoup faced while creating the piece was an initial lack of music to choreograph the dance to. A friend of Shoup’s composed the music for the piece, which took a while to create. This challenge led to Shoup using a metronome or other compositions to choreograph different parts of the piece. However, it all worked out once the composition was finished.

“Basically, I told him that I wanted spacious music,” Shoup said. “And I wanted it to… give the impression of the sky, and he eventually put out something that I think is really good.”

“Sovereign Song” is choreographed by senior dance pedagogy major Emily Horowitz. The piece explores autonomy and where the line is drawn between fighting for freedom and giving it up for the greater good of society. Horowitz said she was heavily inspired by the conversation surrounding mask mandates during the pandemic.

“I feel like [autonomy] is such a hot topic right now with the mask conversation,” Horowitz said. “There’s an account called MoBBallet on Instagram that talks to Black dancers, and one of them went on for a while about autonomy. That was right around when we were figuring out what to do our pieces on, so I kind of ran with it.”

“By Name” is choreographed by Hope Blackburn, a senior dance performance and English literature double major. It is heavily inspired by another piece that Blackburn worked on, titled “Genesis.” The piece centers around the creation or “beginning” of different things, and “By Name” will share some similarities.

“I decided to make the piece about creation… something that humans can take part in and have been a part of since the beginning of time,” Blackburn said. “It’s all about human creation… human knowledge and understanding love.”

When asked what challenges she faced while creating the piece, Blackburn pointed towards a fear of choreographing without thinking about how others will interpret it. However, completing the piece helped her overcome them.

“I had a lot of fear in the beginning that what I was doing was not different enough,” Blackburn said. “What I was doing… kind of didn’t make sense to me, but I like losing those fears… losing that idea that I had to live up to something.”

“One Dimension in Three”

“One Dimension in Three” is the product of an idea Daniel Scofield, a senior dance and arts administration double major, had from a dance history project he did last year while studying the works of Oskar Schlemmer, a modernist choreographer from Germany. The choreographer attached long rods to different parts of the body to “extend” the body’s physical limits. Scofield is doing the same thing in his piece, but with PVC pipes.

Scofield is excited about the entire piece as a whole, but his favorite part would have to be the ending. The 10 dancers repeat a phrase while intricately moving around the stage.

“When they all do it and they all are holding the pipes… things mashup and move together and it just feels like a working mechanism,” Scofield said. “It’s very satisfying to watch.”

“Pas de Femme” is choreographed by Lydia Wirth, a senior dance performance major, and explores the intersection between classical ballet and feminism. Wirth said classical ballet tends to objectify women, but her piece focuses on empowering them instead.

“I think that women can actually find a lot of empowerment in classical ballet and that we can kind of reclaim it as something that we can use to express our own voices,” Wirth said. “Ballet is very much associated with a submissive kind of woman. Both of the pieces that I did, we’re trying to say ‘no, it can be this really powerful thing for us, too.’”

Wirth and the other choreographers encouraged everyone to come out and see the show, as they have all put an incredible amount of effort into each piece.

The Butler Ballet Senior Choreographers’ Showcase raises its curtain on Friday, March 5 in Clowes Memorial Hall. There will be no in-person attendance for the general public, but a live stream of the show will take place on the Butler Arts and Events Center website.