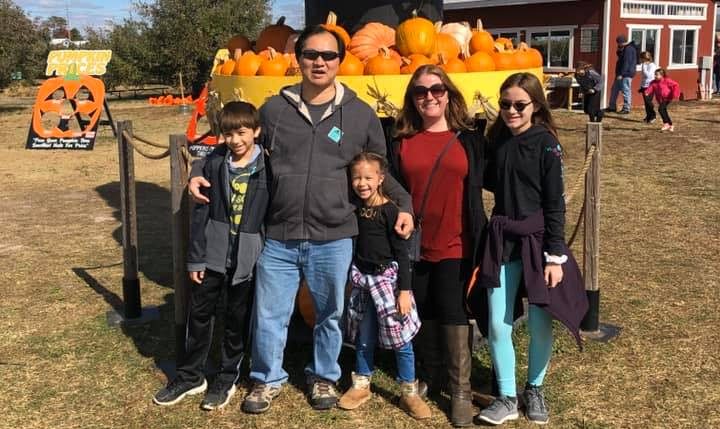 Trien Nguyen pictured with his wife, Judy, and their three children. Photo courtesy of gofundme.com.

When someone passes, oftentimes it’s the small things that people remember most fondly. It’s the tiny acts of kindness, the snippets of selflessness, the passing moments of compassion.

Maybe it was the time when Trien Nguyen went out of his way to stock the new IT fridge with his co-workers’ favorite drinks.

“It’s just the things that you don’t really have to do, I feel like that’s going beyond just being a coworker,” Nick Northcutt, a network/infrastructure operations analyst in Butler’s IT department, said. “He took note of what people cared about, just the little things to make your day better.”

Or maybe it was the time when Nguyen spent a week trying to find his daughter an affordable violin to support her new passion for music. Nguyen came into the IT office and updated his colleagues on the hunt multiple times a week.

“I just think that’s super cool to have a parent that supports their kids and their passions like that,” Northcutt said.

Maybe it was how he passed down a love for Vietnamese food to his children in an effort to share his heritage.

Nguyen, a native of Saigon, Vietnam, was only 46 years old when he died from a COVID-19-related stroke on Dec. 22, 2020. He was hospitalized for four days before passing.

Nguyen was a senior information systems analyst in Butler’s IT department and was pursuing his MBA degree in the Lacy School of Business. Nguyen also had two bachelor’s degrees in computer technology and physics from Purdue University, in addition to a master’s degree in applied physics from Columbia University.

“I think the biggest impact he had on me personally was just the knowledge I was able to garner from him while working together,” Northcutt said. “He has so many years of experience and was so approachable and so friendly that it was a joy to work and learn with him.”

Wade Javorsky, assistant director of IT operations, was Nguyen’s supervisor during his almost three years at Butler. Javorsky said education was extremely important to Nguyen, and he was looking forward to his children potentially attending Butler one day.

Nguyen was married to his wife Judy for 18 years, and they have three children, Alex, Isaac and Evie. He often spoke of being a provider for the family, and appreciated that his career at Butler allowed him to be there for his family, Marietta Stalcup, director of graduate programs in Lacy School of Business, said. Stalcup got to know Nguyen through the MBA program, where she taught him in her fall 2020 Strategic Career Management class.

“[He would say,] ‘Well, I like what Butler offers for me and my family in the sense of stability and security, and I love what I do, I’m really good at what I do, I’m making a positive impact,’” Stalcup said. “So when he talked about his family, it was really all about setting them up for success… it was always about being a good father and a good provider.”

Although Nguyen was sometimes more reserved with his colleagues in IT, Zachary Skidmore, an information systems analyst and team lead, said he loved talking about his kids — that he seemed like a great dad.

“That drive for family was really important to Trien, I think that also informed the way he did his work, because I think Butler felt like a family to him,” Skidmore said. “Whether it’s working with Irwin Library on a special project or just working on something internally in IT, it felt like he had more of an emotional attachment to it.”

Nguyen was also known to his family as the “Family IT Guy,” and would patiently attempt to help anyone with their device troubles.

Nguyen was dedicated to his work in IT, and could often be seen working late nights and back-to-back weekends. He’d work to complete large system upgrades and rolled them out across all buildings on campus to keep the Butler secure. In mid-2020, Nguyen was at the helm of transitioning Butler to a Windows-based system.

Javorsky said Nguyen was willing to jump into any task, even if it wasn’t part of his regular responsibilities or he didn’t have specific knowledge in that area. Northcutt added that he was passionate about scripting to improve and simplify technological processes.

“One of the traits I always look for in staff members on my team is folks who are just naturally inquisitive and want to learn more about things,” Javorsky said. “He wanted to know how things work and wasn’t afraid to take a problem apart, see how it worked on the inside and put it back together.”

In addition to his regular duties within IT, Nguyen helped complete a special project with the Butler library to preserve digital content for Indiana cultural heritage institutions. One colleague — who preferred to remain anonymous — said he was an enthusiastic, understanding supporter of the project.

“Trien had an upbeat and positive attitude which made it a pleasure to work with him,” they said in an email to The Butler Collegian. “Trien’s clear explanations of the technical aspects of a project were especially helpful… Trien was an excellent colleague and will be missed.”

Several of Nguyen’s colleagues and classmates noted how Nguyen always made people feel welcome; he was approachable and went out of his way to help others. Jonathan Gerber, one of Nguyen’s MBA classmates, said he was a light in the classroom.

“He was a servant leader and his legacy on Butler will be deeply missed, but hopefully all the individuals that were lucky enough to know Trien will try to be the type and demonstrate the qualities of the servant leader that Trien embodied,” Gerber said in an email to The Butler Collegian.

In the MBA program, Nguyen wasn’t afraid to speak out and share his opinion in class. His background was different from many of his classmates, and sharing how his personal experiences with the class often led to fruitful discussions, Stalcup said.

“I think the impact is that people really enjoyed having him in the class, they enjoyed getting to know him, they enjoyed his different perspective, they enjoyed that contrarian viewpoint because it helped facilitate their learning,” Stalcup said. “So I think his legacy for my classes is that through who he was, he was able to positively impact the other students and allow them to take more from the class, than they would have had he not been there.”

In Stalcup’s Strategic Career Management class, the first few weeks were spent in breakout room discussions on Zoom. A common activity she conducted was for the students to nominate someone as most impactful, and because of his perspectives, Nguyen was often chosen.

Nguyen left a lasting impact on his colleagues in the IT department as well. Skidmore said Nguyen left a legacy of getting the job done in a way that goes above and beyond.

“It was very inspirational to watch him not just get something done, but make it work so well that I’m like, ‘Wow, when I go to do my thing I have to raise my own bar,’ and everyone around him felt that same good pressure,” Skidmore said.

Nguyen’s lasting legacy represents many of Butler’s values, including a strong work ethic and dedication to helping those around him. During the summer of 2018, the IT department was working on several new projects and personnel changes. Skidmore was on vacation when several things went awry, but he returned to find the situation in good shape, thanks in part to Nguyen diving in to help.

“At that point, I knew we had made a good choice in Trien, because I knew Trien is the kind of guy that I could trust to jump in and make things good to go, and he really helped us through a dark period with that,” Skidmore said. “That’s just one of the most powerful memories I have, if I can try to describe an embodiment of what Butler is supposed to be about.”

If you are interested in supporting the Nguyen family, Southeastern Elementary has organized a GoFundMe.