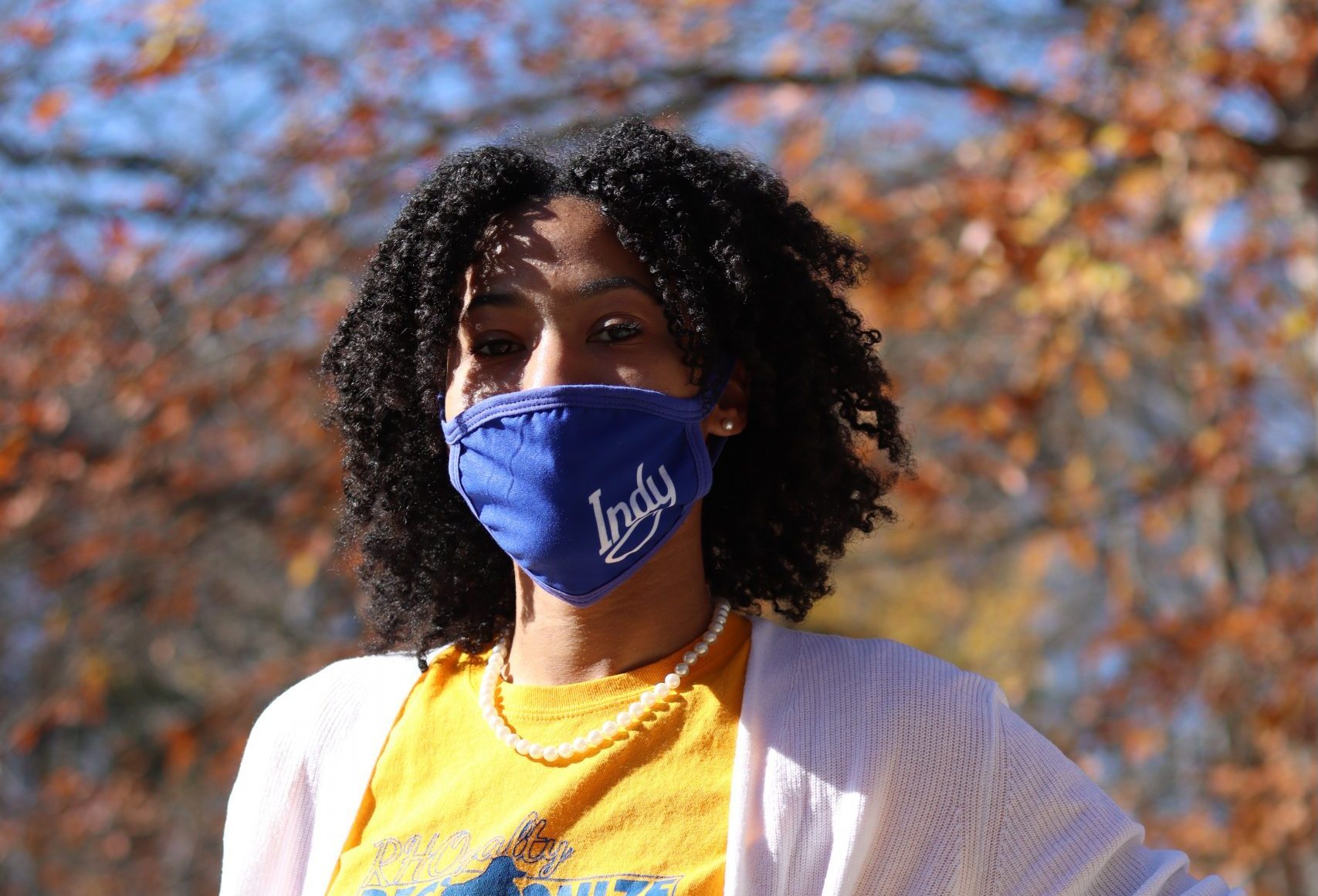 Ivory is a diversity center student coordinator as well as the president of the Alpha chapter of Sigma Gamma Rho, which was founded at Butler. Photo by Xan Korman.

Senior anthropology major Michaela Ivory is dedicated to diversity and the allocation of safe spaces for multicultural students on Butler’s campus. Ivory, who is president of Sigma Gamma Rho and a student coordinator for the Efroymson Diversity Center, looks back on the legacy she will leave on these organizations, and the impact they have left on her.

The Butler Collegian: What is your involvement on campus?

Michaela Ivory:  So right now I serve as the President of the almighty Alpha chapter of Sigma Gamma Rho Sorority Incorporated. It’s a Divine Nine, or National Pan-Hellenic Council organization that was founded on Butler University’s campus in 1922. I’m also a student coordinator in the Efroymson Diversity Center. I’ve been employed down there since the fall of 2019.

TBC: Can you tell me more about the organizations you are involved with?

MI: I’ll start with Sigma Gamma Rho. So I was initiated in spring of 2020, and I became the president after [the previous president] graduated this past semester. I’m currently the only active member of the Alpha chapter, and it’s definitely a lot of work, but it’s definitely worth it. It’s been interesting trying to navigate this leadership position, because I’m really used to working with other people since I was the president of Black Student Union last year.

It’s definitely been difficult, trying to engage with my Sorors [fellow Sigma Gamma Rho sisters], as well as students with potential interest because we’re in a pandemic, and trying to explore this virtual dynamic. It’s new waters for me, being a new initiate of the organization — it’s not like I have anyone ahead of me who has experienced doing things the old way before the COVID-19 pandemic hit. I’m exploring this as a new member from a new perspective, as are several people and organizations across campus.

As far as the Diversity Center, I’m a student coordinator. I would say it’s more to being like a manager of the space, and it’s been an interesting experience. Since the loss of professional staff at the diversity center, it’s given the opportunity for a colleague and I to take on more responsibilities. I’ve been involved more with coordinating the multicultural mentorship program.

TBC: What would you say to students who are on the fence about joining Sigma Gamma Rho, or organizations in the diversity center?

MI: At least for organizations in the National Pan-Hellenic Council, do research and get to know people within the organization, get to know current members. You don’t have to talk about the organization all the time, but you have to understand, maybe what kind of people you may be looking for. But also, if you’re nervous, don’t limit yourself, don’t limit your personality. I know a lot of organizations, at least in the National Pan-Hellenic Council, have certain perceptions and stereotypes. But at the end of the day, you shouldn’t look to fill a stereotype in order to become part of that organization.

TBC: How has your involvement with the diversity center and Sigma Gamma Rho impacted your time at Butler?

MI: Well, with the Diversity Center, I have been spending time there since my freshman year. I entered Butler in fall 2017 and the Diversity Center has always been a safe haven for me. I think it’s really important to have those spaces when you are exploring a new environment. I didn’t know much about Butler when I first attended, or when I was first learning about different colleges and universities [and Butler] wasn’t my first choice. I think because I was able to find comfort in the Diversity Center, it really helped me make the decision to stay here at Butler and continue my education here and see it through.

As for Sigma Gamma Rho, it was those members of the organization who I knew prior to joining and then [continued to help] me on my personal development, personal growth, as a young woman, a young black woman — that definitely has impacted my decision to stay here at Butler. I try to find the good parts, the positive parts and create spaces of comfort for myself.

TBC: Why did you choose to resign from your executive board position in Black Student Union?

MI: I recently resigned as vice president of communications from the Black Student Union. My decision really has everything to do with growth. I recognize the potential for me to

grow within that organization, however, I like to be in spaces where the people around me are displaying genuine efforts to develop themselves and to grow both personally and professionally. I did not witness that from everyone. It’s important to surround yourself with people who don’t always have to share your values, but, you know, maybe at least they have the same drive as you. Same energy, sometimes similar interest. Because I didn’t [see that in everyone], I feel like my growth had been stunted. I made the decision that it was time for me to leave instead of remaining in a position where my growth was uncertain. It was definitely interesting because I was the president last year, and I chose to step back from the presidency and pursue one of the vice-presidential positions because I wanted to spend more time with the Alpha chapter of Sigma Gamma Rho since I would be the only active member.

I just felt like my heart wasn’t completely in it either. I feel like I couldn’t help BSU grow from that position as well as I could if I were still in the presidency. So I’ve taken something off my plate, and definitely [taken away some] stress since I resigned from the position. But I want to direct my focus to still helping the black population of Butler grow and thrive and find comfort, being in this university or find some sort of comfort in the Butler community. I want to make sure that we are thriving, which is why and I’m grateful for so involved with the Diversity Center.

TBC: What do you plan to do after you graduate?

MI: So after I graduate, I’m hoping to do some work with food justice. I’m still learning about it, but I know that Indianapolis has been a prime spot for food deserts, and I have an issue with that. I want to make sure people across the city have access to healthy, nutritious food, because everyone’s health depends on it. That way, I can help develop reasonable solutions, reasonable and equitable solutions for citizens of Indianapolis, to try to eradicate these food deserts. I just want to make sure that we all have access to what we need. But I will be honest, I’m still trying to figure out exactly what I want to do after college. As much as I want to do that, I’m still open to the possibilities of where my life could go.

I’ve been a part of several different groups both at Butler and in the Indianapolis community that have piqued my interest in different areas of life. My plan over all these next couple of semesters before I graduate, [is] to consult those experiences. [I want to] get to the root of what it is that interested me about them, what the particular issues are that these groups concern themselves with, and try to figure out if there is more there for me. And then of course, get connected with the right people to help me bring, whatever my goals and dreams are, to fruition. But I’m not in a huge rush to make anything happen. I’m just exploring, and I’m going to enjoy this time I have left to explore my options.

As the only member of Sigma Gamma Rho, Ivory carries the important legacy of the sorority on her shoulders, as the sorority is not only a part of the Divine Nine, but was also founded at Butler University. Through her presidency of the Alpha chapter and her work in the Diversity Center, Ivory encourages others to embrace diversity, equity and inclusion, regardless of the obstacles.

“Since [the founding members of Sigma Gamma Rho] were at Butler in 1922, things have improved significantly, and I have to reflect a lot on, [like] what’s good about the university [and what] things can improve,” Ivory said. “I just have to consider: do I want to be a part of those improvements? Do I want to contribute to making this university the best that can be?”