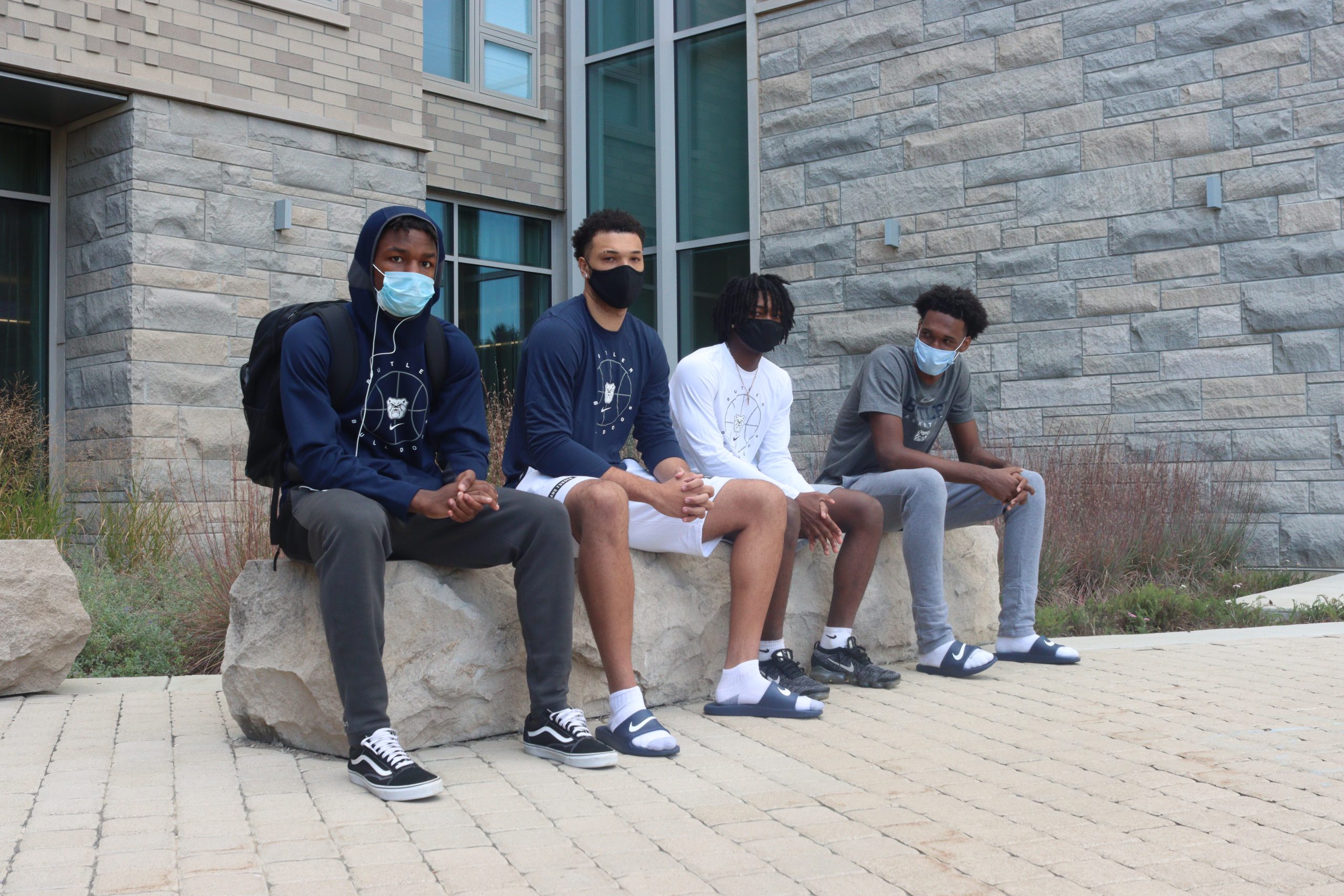 Photo editor and sports reporter Xan Korman had a chance to talk with Butler’s five incoming freshmen over a recorded Zoom interview call. This year, Butler’s incoming first-year class consists of five players, making up a third of their roster. According to ESPN rankings, Myles Tate was ranked a four-star and the other four freshmen were ranked as three-stars. It is Butler’s highest-ranked recruiting class in school history.

Making the move from high school to college is already a huge transition. Adding COVID-19, along with being a member of one of the largest collegiate men’s basketball programs in the country brings a whole different level of adversity.

6-foot-7 forward JaKobe Coles played with the likes of Cade Cunningham and Greg Brown III, who are ranked first and tenth according to ESPN’s 2020 recruiting class rankings respectively, during his AAU stint. In his final high school season, Coles averaged 17.5 points, 8.5 rebounds and 3.5 assists per game.

Xan Korman: How was your experience when you got here different from what you were expecting before COVID-19?

JaKobe Coles: I think when I first got here everything was a pretty much slowed down as far as moving the moving process and getting everything situated. You know, a lot of stuff was cancelled and we couldn’t really do a lot of workouts like the summer session, which was cancelled for us as far as coming in earlier.

XK: How is it balancing workouts and with classes, since they’re online?

JC: As far as workouts, it depends on what class you have. Actually, I think it’s a little bit smoother because you have Zoom. So, you’re not walking from class to class and figuring out where we’re supposed to be. It really is just logging on for a Zoom class and then you got workouts.

XK: And since there’s five new freshmen, do you feel like the chemistry between you guys is going to be stronger because there’s more of you and you are with each other more?

JC: We are pretty close. You know, we hang out every day. We’ve been in contact since we committed and signed here. So having that bond early as a freshman group is only going to help us grow even more.

JC: I really enjoyed my high school, my school seasons and my AAU seasons. I got a chance to play with a lot of great guys and a lot of guys that are highly ranked. A lot of guys that are playing at major D1 schools. Going against the best talent has always been fun and those guys that I played with, you know, those are lifelong friendships that I have as well. So, being able to have connections like that and being able to spend time with guys that think similarly to you and want to compete and win.

Carlos “Scooby” Johnson, a 6-foot-6 forward from Michigan, won the state’s Mr. Basketball while putting up 25 points, 11 rebounds and 5.9 assists per game during his senior season. Johnson is redshirting the 2020-21 basketball season with a torn ACL in his left knee.

XK: Is it easier or harder balancing schoolwork and workouts with online classes?

Scooby Johnson: For me, my classes are half and half. One day, I have 9 a.m. on Zoom and then at 10 a.m., I go to class so I wouldn’t say it’s hard; it’s just whatever you make it to be. So for me, I had my surgery and I kind of fell behind with work. So, fighting back is the hardest part because new work is getting assigned every day, so it’s kind of hard depending on how you do your work. Most of the time, I spend most of the day after working out before working on my schoolwork.

XK: So, since there’s a group of five freshmen, do you feel like the chemistry is going to be higher because you guys are with each other so much?

SJ: We all play the game together, go get something to eat, three of us share the same suite so we have a good amount of chemistry with each other, while the other two might stop by every now and then. I think that that all has an effect on the court when the time comes.

XK: How did it feel when you found out you won Michigan Mr. Basketball?

SJ: For me, I was dealing with my shoulder injury and I came back from that. So when they shut the season down, I was sitting around kind of like moping. I couldn’t do rehab or anything. Then, I got a call — it was a random call — and they were asking me about Mr. Basketball and interviewing me for questions. And I’m like, “This must just be a part of the poll.” And then they ended up announcing it. That was like a different shock to me because I never expected me out of all the people to win. It was a blessing for me; I was thankful for it.

XK: So you were just like sitting in your house and they called you? You weren’t really doing anything?

SJ: [I was] sitting around playing a game. I got a call and they just interviewed me with questions and they told me I had won three or four days before they announced it to the public and I really couldn’t tell anybody even though I wanted to so bad.

XK: How about your surgery, that went well?

XK: What were some differences that you noticed when you got here from what you were expecting before COVID-19?

Myles Tate: The biggest change for me was for us to be the only ones on campus. There wasn’t anybody here but the team. No other students, so it was kind of a shock to me. But yeah, we adjusted to it.

MT: Well, for me personally, learning online is kind of difficult because I don’t get to ask one-on-one questions or I don’t get eye contact, like the small stuff. Learning in-person for me is just easier because you actually see what’s going on, but I’ve adjusted.

XK: What’s your expectation coming from being the star player on your high school team. How do you expect to adapt to your new role?

MT: I’m just trying to come in and do what’s told by the coaches, you know, just try to help us win in the best way possible and that’s anything I have to do just to work hard every day. I’m going to do that for sure. And I’m just gonna do what’s expected, follow what my coaches say.

XK: How’s it feel being a four-time state champion at your high school, and just bringing the winning legacy towards Butler?

MT: Yeah, being a state champion four times in high school is special. It was a bond that me and my coach had and we just carried it on the court and off the court. So, you have a good bond with your coach and he’ll let you play the way you want to play and you can win a lot of games. And I’m just trying to carry that same mentality here to be a winner and do whatever helps this team win.

Averaging 17 points and 11.4 rebounds per game in his final year of high school at St. Andrew’s (RI), Myles Wilmoth is a 6-foot-9 forward. He also earned the title of Rhode Island Independent Schools Athlete of the Year.

XK: What were the differences that you noticed when you got here from what you expected before COVID-19?

Myles Wilmoth: I mean, I expected at first to get here in late June. We’ve been talking about ‘winning the wait’ for a while as a team, with COVID and everything. It was going to push everything back but I was still excited. I remember when coach [LaVall Jordan] finally told us that we were going to be here on Aug. 1 and I’ve been here since. We have a long season ahead. It is what it is, we just got to find a way to get through it as a team.

XK: How do workouts and practices differ from what they were originally going to be?

MW: Well, obviously, we work out with masks on. That’s everywhere — that’s in the weight room, on the court. I think we would have been playing with more contact and playing against each other more but now I would say we do a lot more socially-distanced skill work. But we started to get back to the team work and we had like three team workouts. We competed in a little four-on-four last time out, so it’s getting there.

XK: Do you think balancing workouts with classes is harder than it would have been because some classes are online?

MW: Yes, it’s definitely more difficult because I’m more of a hands-on type of learner like I’d rather do something to learn. I’m not the type where it just comes to me; I’d rather be in it so it takes a lot more focus than listening online. But I mean, just like the team always says “tougher longer”. We just have to have that mental toughness and find a way to do what you gotta do and still get your work done and be ready for your workouts.

This interview was edited for length and clarity.