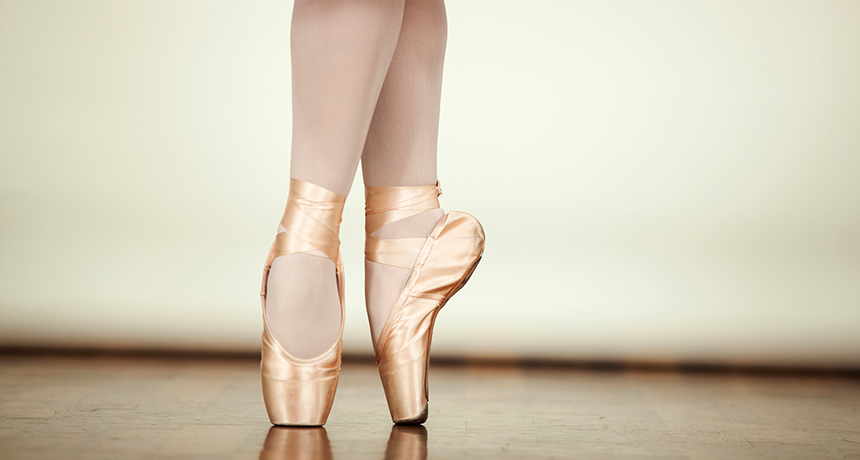 Butler dance students share the dangers of dancing without a studio. Photo courtesy of The Dominion Post.

For the past two weeks, since the stay-in-place order took effect on Aug. 23, dance majors have been forced to practice and attend classes without the advantages of a studio. They have turned door knobs into barres, senior house floors into studio floors and common spaces into rehearsal spaces. While dancers were able to go back to in-person studio classes on Sept. 2, they had to get creative for the stay-in-place period.

While these not-so-ideal spaces served their purpose — for the most part — they also placed dancers at a higher risk of sustaining injuries.

Emma Skrzypczack, a first-year dance arts administration major, has several classes this semester that would normally be held in a studio, such as ballet, pointe and jazz. Since the stay-in-place order, she’s been doing her classes in the small entryway of her Irvington dorm room, which she said is not the most ideal.

“I can’t exactly stretch my arms across, and I also like to dance with people so doing it alone by myself kind of it makes it harder because you’re already hard on yourself as it is,” Skrzypczack said. “Also, hearing the teachers and understanding what they’re doing and seeing what they’re doing is difficult.”

Joanna Henn, a first-year ballet performance major, also has had difficulties dancing in her dorm in Residential College. She said the spatial constraints in her room often take away from the most rewarding aspects of dance.

“We’re barely jumping in class because the floors are very bad and hard on our ankles,” Henn said. “So that’s something we don’t get to do. One of the best things about dance class is that we go across the floor and we jump and our legs split in their air often times and it feels like you’re flying, but with Zoom classes we can’t do those because we don’t have a floor we can jump on.”

Anna Moeller, a first-year ballet and actuarial science major, has been using a door knob as a makeshift barre. Moeller said doing classes in her dorm has been difficult, especially since the floors have proven to be a consistent danger.

“Well, first of all the floors are very slick, and our teachers have been trying to give us a realistic experience but at the same time it makes it more dangerous for all of us,” Moeller said. “When we try to do anything that travels, the floor is very slick so I ended up slipping and twisting my ankle.”

Katherine Cackovic, a senior dance arts administration major, is juggling more than just studio classes — she is also beginning the audition process to apply for professional jobs at dance companies across the country. Cackovic has been taking classes in the living room of her senior house, and she said adapting her house to the needs that would normally be met in a studio has been difficult.

“We had to move all of our furniture out of our living room and push it to the side so we had room to move,” Cackovic said. “We went to a hardware store and got shower pan liner to act as sort of a makeshift flooring so the floor isn’t as slippery and we can do turns. It’s hard to stay motivated and keep doing your training the way we’ve been training our whole lives and suddenly it’s put on pause because the university says you have to stay home.”

Turning and jumping are the most difficult things that Cackovic has to do in her makeshift studio. Like many dancers, the floor is especially concerning because of potential injuries, such as shin splints and twisted ankles.

“This is not about being inconvenienced, because we’re all inconvenienced about not being in in-person classes, but this is a matter of safety and injury,” Cackovic said. “We are dedicated to being as safe as possible because this is our livelihood and our body is on the line if we have to dance at home.”

Dance professor Derek Reid knows that some important things — like musicality — are lost when doing virtual classes, but other things, like his ability to see all students at once have improved his ability to teach this semester.

“We were all excited about the opportunity to get back into the studios and not hearing that that wasn’t happening until the day before was a bit of a shock,” Reid said. “I had always planned having my academic classes online, but not getting back in the studio was a tough blow. That was a bit of a shock, but as we’ve learned to do you sort of get that information and do your best to make it something that can work with the students,” he said.

As classes return to in-person, Reid emphasized the importance of practicing safety precautions to avoid going back to makeshift studios and all of their potential hazards.

“It is tough, I get it — I went to Butler,” Reid said. “I’m hoping that there was some remorse from those students that started us on that path and just an understanding from everyone that this is a long term group effort in order for us to really get through this semester intact.”