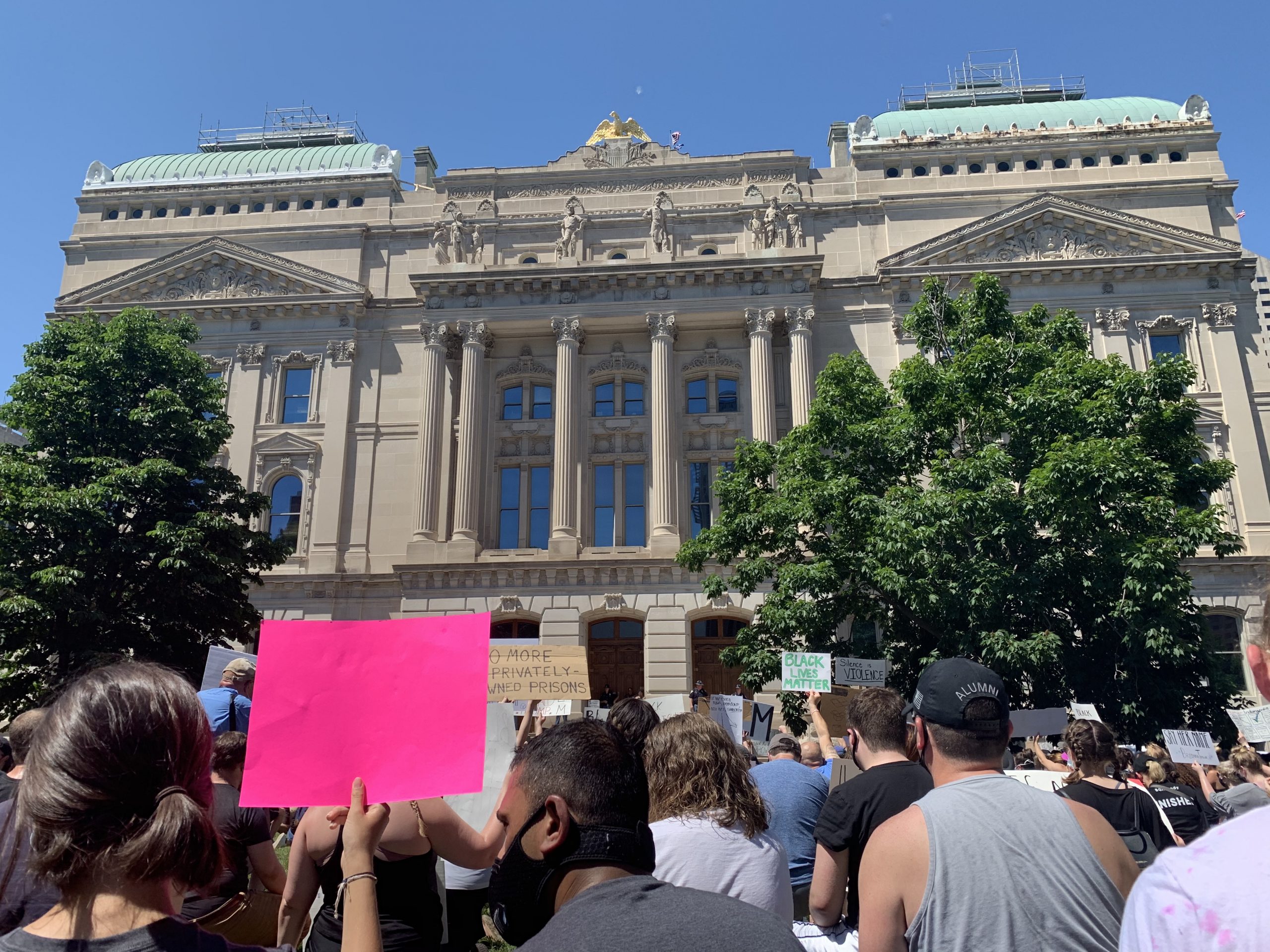 George Floyd. Breonna Taylor. Dreasjon Reed. McHale Rose. These are just four of the 1,318 Black people murdered by police in the past year. The rise of the Black Lives Matter movement has undeniably changed, and continues to change, Butler University, Indianapolis and the United States.

Simultaneously, however, the black squares on Instagram and memes commodifying the phrase “arrest the cops who killed Breonna Taylor” on Twitter have exemplified the social media epidemic of performative activism, plaguing feeds with inauthentic wokeness. Here are some tips from Black students at Butler on how to put your activism where your heart is — not for followers or social justice clout, but to protect and advocate for Black lives at risk due to the prevalence of prejudice. Also included are tips for students of color on how to survive and thrive at a predominately-white institution like Butler.

Recognize that your experience is fundamentally different from BIPOC students’ experience

The Black experience at Butler is something that 81.4% of the student body will never and can never understand, according to senior psychology major Aine Montgomery. Montgomery likens her experience at Butler to a rollercoaster, with ups including finding people on individual levels who feel Butler needs to make fundamental changes to promote equality, and downs such as hate speech and lack of action by administration.

“It seems like every single year there’s an incident or occurrence that attacks at least one of the identities that I hold,” Montgomery said. “[There has been] a lot of hate speech, and then nothing gets done by the university.”

According to Montgomery, there’s a difference between loving Butler wholeheartedly and understanding that the university is not utopic for every student.

“I feel like that kind of the mentality — that everybody has the same experience and everybody loves the school or [they] wouldn’t be here — that lack of acknowledgement is so harmful, more than I think a lot of people recognize,” Montgomery said.

Statements like, ‘well I love this school and I haven’t had a bad time’ are disrespectful and naive, according to Montgomery. Montgomery makes it clear that toxically-positive statements blindly praising the university can tend to discount Black students’ experiences and wishes for improvement.

“Well of course you haven’t had a bad time, the university caters to you,” Montgomery said. “[Students need to] remember that the university doesn’t cater to everybody that goes here and it’s important to acknowledge that and to speak up.”

Speaking out against racism

Aside from acknowledging white privilege, students should be using their voice to speak out against racism in all environments on campus: from parties to Plum Market.

Second year pharmacy student Nick Taylor feels that if students are being problematic or racist, it is white students’ responsibilities to speak out.

“For example, I’ve encountered situations at parties where students will say the n-word when a rap song comes on and… it doesn’t make Black students feel comfortable about speaking up when everyone in the room is saying it,” Taylor said.

Taylor said no matter the location, students need to advocate for Black students’ sake. Though it may be awkward or uncomfortable to acknowledge friends, acquaintances or strangers’ acts of racism, one awkward moment could prevent countless acts of racism — accidental or not — from reoccurring.

“In any situation where students are around, if you are a white person and you witness something, it is important that you stand up against those people so you can start changing behaviors and start changing culture,” Taylor said.

Senior music education major Yzabel Tio has similar thoughts. She feels that white students should be doing more than just “retweeting something or posting a black square.” Tio encourages white students to speak out in front of “people that you know don’t agree with something like Black Lives Matter,” or “racist family members.”

Tio said one way to make BIPOC students feel validated and protected is by “saying something to the people, not the Black people, but the white people.”

Students also have the opportunity to speak out by attending marches and protests, such as the virtual March on Washington that was held on Aug. 27 and  28. There will also be a sit-in on Indiana Avenue on Sept.

5 at 3 p.m., according to University of Indy student and organizer Tyshara Loynes.

“There are so many divisions in this city between so many groups and so many organizations and this sit-in is to shed the light on how collaborative we need to be and how strong we are when we are collaborative,” Loynes said.

When in diversity-based discussions, Tio explained that while students of color want everyone’s opinions and don’t want to be the token people of color, there are some limits.

“Don’t ever trample or step on a Black person’s opinion and don’t pretend like you understand what they’re going through and you know exactly how they feel, because you probably don’t,” Tio said.

Devon Cummings, a sophomore music education and vocal performance double major, has simple wishes for white people when it comes to discussing racism: “don’t talk so much.” Cummings believes it is good to ask questions, but better to advocate for minority voices first.

“If you want to understand the problem, you need to talk to the people themselves — the people that are struggling, that are being affected by these problems,” Cummings said.

Gina Forrest, executive director of Diversity, Equity and Inclusion, urges students, faculty and administration to “keep listening and challenging people to do better.” She also emphasized the importance of continuing to learn.

“Keep learning, you cannot stop learning. It never ends. I’ve done this job for several, several years and I never stop learning… you have to keep that energy up,” Forrest said.

When it comes to surviving and thriving at a predominately white institution, Montgomery advises that students “look to those who have been here longer than you.” While she believes that the responsibility of ensuring minority students at Butler feel safe and accepted shouldn’t fall on students’ shoulders, she acknowledges that their experiences and advice are valuable.

“They’ve done this before, they know what to do, what professors to avoid, they know how to navigate conversations about experiences. We want to help and we want to make campus better, better than we found it,” Montgomery said.

Taylor advises students to make sure they have resources to reach out to and feel supported by — specifically, he said the Efroymson Diversity Center, counselling services and other students of color are imperative for minority students’ mental health.

“Having those outlets for expressing yourself and finding who you are and what you’re passionate about is really important for just being successful in college in general, but especially as a person of color,” Taylor said.

Forrest also believes finding people to connect with is imperative.

“Please find someone that you can connect with, [whether it’s the] Diversity Center, the CFV [or] a student organization,” Forrest said.

If students have a hard time finding friends, she hopes they reach out to her for help. The Diversity Center also has a multicultural mentorship program, in which “students of color, LGBTQIA+ community members, 21st Century Scholars, and first generation students” can be paired with upperclassmen mentors, according to an email sent by the Diversity Center.

Remember that “you’re here for a reason”

Cummings explained how “everything” at Butler, from the predominately-white student body to incidents of blatant racism, can “feel heavy,” but encourages students of color to try to not let it “take your energy and make it harder for you, harder than it already is.”

Taylor said that feeling a sense of belonging can come from classes, engaging with professors, extracurriculars and friendships. He said that thanks to classes, professors and extracurriculars, he feels he has “a place at Butler, even though our school is predominantly white.”

Tio has similar thoughts. She wants students of color to remember: “you go to this school because you’re special and you’re important and you have a lot to share with the world.”