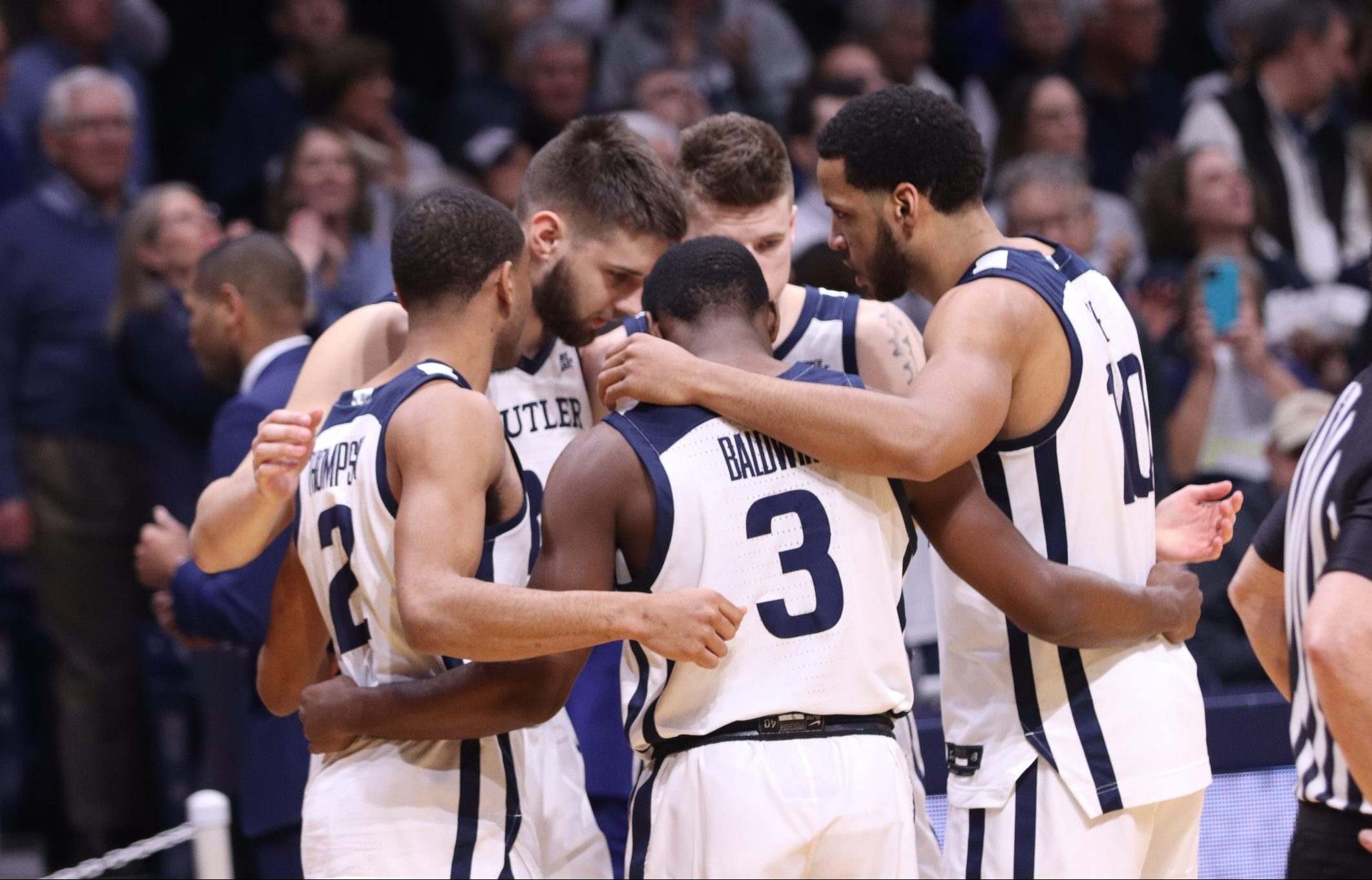 The Butler men’s basketball team huddles during the team’s win over St. John’s on March 4. The Bulldogs play at Xavier on March 7 in their regular season finale. Xan Korman / Collegian file photo.

After an all-around impressive second half pushed the Bulldogs to a convincing 22-point win over St. John’s on senior night, the Butler men’s basketball team will travel to Cincinnati to take on Xavier in its regular season finale.

Behind double digits from Sean McDermott, Kamar Baldwin and Jordan Tucker, Butler defeated Xavier 66-61 at Hinkle Fieldhouse on Feb. 12 despite significant second half obstacles. Bryce Nze and Bryce Golden battled foul trouble, while Aaron Thompson and Derrik Smits both exited with injuries in the final 20 minutes. After building up a nine-point lead at halftime, the Bulldogs were able to fend off multiple runs from the Musketeers to come away with the victory.

Butler has gone 2-3 since that game, dropping three straight before winning its last two contests. Xavier has won three of its five games since then, with victories over the bottom three teams in the Big East standings and losses to Villanova and Providence, which defeated the Musketeers 80-74 in Rhode Island on March 4 in Xavier’s most recent game.

Here’s what you need to know as Butler looks to reach 10 conference wins for the first time in LaVall Jordan’s tenure as head coach:

The Musketeers are not extremely tall – their tallest starter is 6 feet, 9 inches – but they are one of the most physical teams in the Big East. Xavier’s mark of roughly 39 rebounds per game is 28th in the country, and the Musketeers have only lost the rebound battle in one of their last nine contests. Overall, Xavier boasts the second-best rebounding margin in the conference.

Xavier also secures an extra chance on the offensive end roughly one-third of the time, with an offensive rebounding percentage of 32.2%. Five times in Big East play Xavier has scored 18 or more second chance points, something Butler hasn’t done once in conference action. The Bulldogs are 50th nationally in defensive rebounding rate, and will need to limit second chance opportunities from the Musketeers.

Xavier has five players averaging four or more rebounds per game, and is led in that department by senior forward Tyrique Jones, whose 12 boards per game in conference play leads the Big East. Jones has tallied double-digit rebounds in 10 of the Musketeers’ last 12 games. It’s also worth noting that junior guard Paul Scruggs, the team’s third-leading scorer, missed its loss at Providence due to a leg injury. If Scruggs, who leads the team in 3-pointers and 3-point percentage, doesn’t play against Butler, even more emphasis could be placed on scoring in the paint for Xavier.

Xavier is the best team in the Big East at defending the arc, with conference opponents shooting just 30% from behind the 3-point line. Only two of the Musketeers’ last 10 opponents have made better than a third of their 3-point shots. Butler, which has at times shown an overreliance on the three-ball, has only won two Big East games this season when knocking down one-third or fewer of its 3-point shots. In those two wins, against Creighton and DePaul, the Bulldogs scored 34 and 26 points in the paint, respectively.

The Musketeers will play aggressively on the defensive end and fight for extra opportunities on the offensive end, and the Bulldogs will need to come prepared to match their physicality. Especially if the shots aren’t dropping from distance, Butler players – in particular McDermott and Tucker – need to be able to drive to the basket and draw contact. Butler has the edge in foul shooting, as Butler is shooting 74% from the charity stripe in conference play compared to Xavier’s 64% mark, which is last in the Big East.

While a win over the Friars would have virtually assured them a spot in the NCAA Tournament, the Musketeers’ loss means they are still on the bubble heading into their conference finale. In their latest updates, ESPN’s Joe Lunardi and CBS Sports’ Jerry Palm both have Xavier as one of his last four byes and a nine seed in the tournament.

While the Bulldogs have locked up an NCAA Tournament spot, Saturday’s game still could have Big East Tournament implications. A win over the Musketeers would assure Butler, which sits one game above Xavier and Marquette, of the five seed in the conference tournament. While there are still over 30 different seeding scenarios at play heading into the weekend, the Bulldogs are guaranteed either a five or six seed, meaning they’ve locked up a first round bye. Xavier is still in a position to be the five, six or seven seed. In short, in addition to their rivalry, both of these teams will have plenty to play for as they wrap up regular season play.